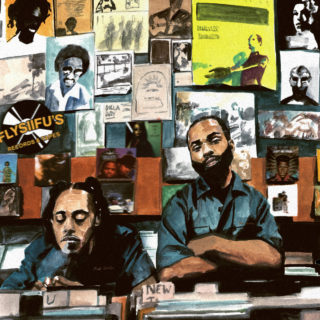 Respectively, Pink Siifu and Fly Anakin are quietly need-to-know names in US underground rap, each of them having released two fascinating projects in the past year. Alabama-born MC, singer and producer Siifu put out the laidback but enigmatic Bag Talk with LA rapper YUNGMORPHEUS at the tail-end of 2019, a contemporary take on classic, smooth hip-hop. This was followed by the gloriously visceral and seething NEGRO back in April – melding punk, jazz and hip-hop. Meanwhile, Virginia rapper Fly Anakin is one of the founding members of Richmond hip-hop collective Mutant Academy, known for its gritty output. His two 2020 releases, At The End of the Day and The 8’s (2015-2018), both showcased his potent, distinctive delivery over lush instrumentals.

The concept of the pair’s collaborative record finds them running a fictitious record store together, Fly Siifu’s. This lends the release something fun and endearing – like shopowners conversing and playing each other tracks they’re into, the record slips comfortably between getting ready to open up for the day, discussions of family, fear, death, systemic failures, Blackness, whiteness and the alt-right, all peppered with comical voicemails from disgruntled customers annoyed with their terrible service. These are played by peers, with a particularly enjoyable cameo coming from the lilting tones of Chattanooga MC BbyMutha on ‘Black Bitches Matter Hoe’.

The record store conceit gives the project a cohesiveness that resists being overwrought or corny because of both rappers’ slick chemistry throughout: the precise, subtle intensity of Fly Anakin cuts through against Siifu’s gentler but deft intonations. Production-wise, there’s an overarching sense of soft-focus as the songs scuzzily, cosily bleed into each other. It feels telling that Madlib guests as beatmaker on ‘Time Up’; the sonic vibe of the whole record has a soulful warmth, albeit married with more forward-facing, explorative free jazz: think wailing sax, liquid percussion and rich smatterings of brass.

Following on from NEGRO, it feels a shame things don’t get a little more raw and leftfield from Pink Siifu on this – nonetheless, Fly Siifu’s is undoubtedly an accomplished collaboration from two of the most solid, interesting names rising through alternative hip-hop right now.