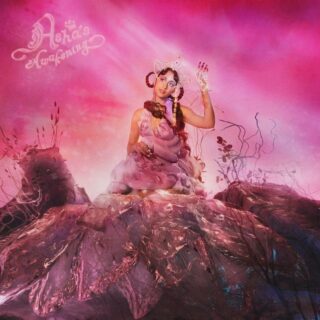 For her major label debut, Raveena plays the role of Asha, a cosmic princess from ancient Punjab, whose quest is coloured by breezy R&B, Neptunes-era pop, Bollywood soundtracks and South Asian traditional instruments. It’s a heady mix, but the brilliance of Asha’s Awakening is how it blends these separate pieces into the joy of a pop record. It opens with her most immediate tracks to date. ‘Rush’ and ‘Secret’ are minimal and lively earworms, carried by cool melodies and Raveena’s flirtatious vocal delivery. The latter has a laidback Vince Staples feature that’s perfect for a song with so much groove and negative space.

‘Kathy Left 4 Kathmandu’ stands out from this first batch of upbeat offerings, playing with the ‘mystic healer’ archetype in it’s tale of a westerner gentrifying Indian spiritualism on her gap year. “I can open up your third eye, as long as you can pay your price,” Raveena jokes, over phasing guitars and improvised bass licks.

After a bubbly first half, Asha’s Awakening gradually becomes loose and explorative. ‘Asha’s Kiss’ is a gorgeous jazzy ballad with Asha Puthli, a personal hero of Raveena’s, whose early pop fusions act as a blueprint for a record like this. Her melismatic delivery hasn’t lost any of its power since essential records like The Devil is Loose. Elsewhere, Raveena reflects on having an abortion at twenty-one on ‘Time Flies’, with quiet optimism and even thanks. There’s a rare kind of positivity to her music that she explores with skill.

The back half features a dreamlike collection of R&B songs, returning to the sound of her early material with easy familiarity. There’s enough subtle interplay to ground this hazy section in something tangible. We end with a 13-minute guided meditation. It’s certainly relaxing, but the record doesn’t need it: Raveena is rejuvenating enough in straightforward song form.