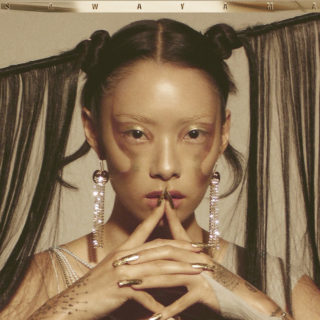 “I like making really uncool things cool,” said Rina Sawayama in a recent interview. The 29-year-old singer has been around for long enough to remember when nu-metal, pop-punk and saccharine R&B reigned supreme. That she’s been brave enough to excavate the arguably dated sounds of her youth for a modern re-versioning on her debut is testament to her bold character and vision. SAWAYAMA is Rina’s playbook; she makes music she feels like making.

Across the record’s 13 tracks Rina hopscotches manically between genres, using different sounds and tropes to best illustrate the finer points of her diary entry on belonging, adolescence and relationships. Most cutting is how she attributes affliction to her British-Japanese identity and the breakdown of her parents’ marriage. “Dynasty / the pain in my vein is hereditary,” she sings on theatrical pop-metal opener ‘Dynasty’, while on ‘STFU!’ she revisits the racist attacks and assumptions people have made about her.

On the latter song, Rina jumps from Korn-indebted licks and avian breakbeats to acoustic jangle and sugary whispers (“Shut the fuck up”). It’s the kind of juxtaposition that shouldn’t work but just does. Rina’s songwriting and production prowess is of no question but you can certainly hear the power of recording/production collaboration with Clarence Clarity here.

Electro-house number ‘Comme des Garçons (Like The Boys)’ – an outward comment on the male ego – is Rina’s soundtrack to a night out. Troye Sivan’s producer Bram Inscore assisted on production as did Nicole Morier, who’s worked with Britney Spears in the past, and yet it’s a sluggish rather than stimulating listen.

With Morier in mind, SAWAYAMA’s standout single, ‘XS’, takes the Britney blueprint but blots it with heavy rock interludes. Rina chases her tail with sultry coos of “give me just a little bit” atop snapping acoustic strums, audibly intoxicated by the song’s detailed excesses of consumerism. Listen closely enough and the makeup of Rina’s maximalist pop is revealed: trap beats, shakers, coin drops, mouth pops, gongs, choral chants, piano trills and guitar harmonics all fold in by the close.

‘XS’, along with ‘90s R&B paean ‘Love Me 4 Me’, and Rina’s familial heartbreak track, the jittery PC Music-esque ‘Akasaka Sad’, are sonically some of SAWAYAMA’s most enlivening moments. They sit mainly in the record’s stronger first half ahead of sadly a few too many polarising (or in some cases recoiling, see ‘Paradisin’ and ‘Who’s Gonna Save U Now?’) tracks. Even Rina’s heartfelt ode to the queer community that accepted her on ‘Chosen Family’ lands too heavy in the pop cheese stakes.

Regardless, credit must be given to Rina for largely eschewing what’s expected of a pop songwriter in 2020. SAWAYAMA is her kaleidoscopic, full-throttle attempt at telling the world exactly who she is. Surely there’s nothing cooler than that?