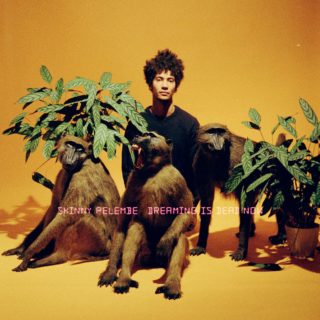 Dreaming is Dead Now is a curious release from Skinny Pelembe, a South African born, Doncaster raised artist channelling eclectic musical influences to offer a meditation on the state of the nation. The album purports to celebrate “flawed, post recession Britain”, and certainly the track titles are evocative and political, calling on the UK’s history of manufacturing and consumerism (‘Gonna Buy a Car Today’), racism (‘No Blacks, No Dogs, No Irish’), stiff upper-lip aristocracy (‘Ten Four, Good Friend’), bawdy sexual comedy (‘Spit/Swallow’) and inherited wealth (‘Blood Relations’) to paint a picture of a nation floundering in the shadows of its imperial history.

There’s a clever, if bizarre, mash up of musical influences here – rock pop meets futuristic electronica on the title track, while ‘No Blacks, No Dogs, No Irish’ has a kind of ska-inflected sound that calls on the race history the song’s title evokes. And the whole record is washed in a heavy dose of reverb. I like the effect this has, particularly on ‘Spit/Swallow’ where the bouncy baselines mellow into something more fluid after the opening bars – a kind of dreamy funk nostalgia that has an occasional Eurythmics flavour, perhaps because of the Annie Lennox quality of the digitally enhanced vocals. I’m also a fan of the reggae sound that creeps up on ‘I’ll Be on Your Mind’ midway through the record.

So there’s plenty to admire in the concept and composition. The problem, if there is one, is that the album doesn’t really deliver on the political critique that the song titles promise. We’re immersed in a sense of something vaguely British, sure, and though Pelembe makes us feel that Britishness, he doesn’t ultimately give us anything new to consider.