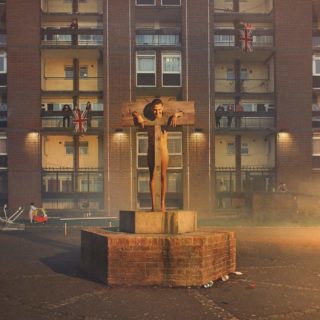 To my mind, there’s a finite number of creative projects that manage to sincerely capture both a specific societal experience and the cultural disposition surrounding a particular place, at a certain period of time, in its authentic entirety. These cultural commodities are rightly thrust into the highest tiers of public conscious, primarily because their themes are relevant to so many of its eventual audience. Filter down even further to products emanating solely from the UK and the pool is even smaller. And let’s face it, managing to apprehend the intricacies of what it is to be British, taking the essence of our cynical shared outlook, weaving in some sardonic dry humour, and distilling into a digestible package, is no easy exploit. In terms of musical ventures, Mike Skinner‘s debut Streets album and Dizzee Rascal’s pioneering of grime with Boy In Da Corner are two projects that have managed to effectively package this representation, and, as a result, these works hold the highest forms of relevance in their own worlds, whilst not being contained within them. Nothing Great About Britain should be considered in the same regard.

The artist is slowthai – a moniker formed by fusing real name Tyron Frampton and a childhood nickname denoting his wandering attention span and speech impediment. It’s a name that since the release of prefatory single ‘Jiggle’ in 2016 has been placed on a simmer of ever-increasing interest and attention. Fast forward a while, past the cumulative progress milestones of being selected as a BBC Sound of 2019 artist, releasing heavy hitting crossover single ‘Doorman’, and being lined up to appear at this year’s Glastonbury Festival, slowthai sits primed, ready to deliver one of the most anticipated debut records of the year.

With the title of the record already decided before any of its contents had been written, its direction is unquestionably with an agenda.

Straight from the condemning conclusion that there’s “nothing great about Britain” on the album’s opener, no time is wasted in outlining the paradoxically incongruous nature of British culture, examining our strained relationship with the monarchy while pointing out the tenderness towards binge drink culture with the line, “bottle of bucky in Buckingham palace”. Underlining the diverse culinary delights on offer while exposing our distraction with antisocial behaviour, slowtai attests, “all I tasted is korma, ASBO, restraining order”. Lauding our efficient transport options and our infatuation with nicotine, he spits, “waving a cab, munching a fag”. On the surface, Buckingham Palace and taxi cabs are what’s expected of British culture, but delve a little deeper and you find a sleazier, more sarcastic underbelly, and in this contradiction slowthai admits “hand on my heart” he’s proud to be British.

His astute lyrical intellect is showcased quickly, while the most immediate moment on the album comes from ‘Doorman’ – a track that exceeds beyond expected channels by virtue of the distinctly audible crossover appeal with the growing punk movement, strategic support slots with Slaves around the time of its original release, and a dynamic and dexterous bassline garnering widespread airplay from a range of radio stations. As the titled suggests, it’s a track on the surface that concerns an unruly night out – bouncers, more fags, more binge drinking and chasing girls. But it’s woven latently to serve as a caustic reprimand of high society and the seemingly ever-widening gap between the haves and have-nots.

More demure and tender moments are also planted across the 11 tracks here. Album closer ‘Northampton’s Child’ is the most unconcealed autobiographical recount of an upbringing troubled by financial hardship and domestic struggle. Soft strings and yielding piano keys take the place of brash electronics while Frampton details the sheer hard work extolled to survive as a member of the town’s working class, compounded by the impact of the untimely death of a sibling to a progressive muscular disease. ‘Gorgeous’ is cut from the same emotive cloth; a tender adoration to growing up in Northampton, itemising his boisterous relationship with the city.

Conceivably the soundest testament to the quality of the record is that the notable feature of grime stalwart Skepta on the Tarantino-inspired ‘Inglorious’ recedes into relative insignificance in relation to the musical potency displayed on rest of the album.

Despite the album title, on the whole the content isn’t as overtly political as some of slowthai’s peers’ output has been (tune in to Friday’s Pyramid Stage headliner set to hear “Fuck Boris” exclaimed to 100,000 people). And while some may level criticism at this, particularly given the plethora of source material provided by the current omnishambles our elected officials are overseeing, the confrontation is more nuanced. The desire for slowthai is for Nothing Great About Britain to sit as a longstanding cautionary statement of ever-present corruption and rising inequalities that threaten to further the divide between the population. By transcending microscopically scrutinising the perils of a specifically outlined time period, and avoiding dissecting specific political or social blunders and the problematic people involved with them, this project is instilled with a timeless quality.

Considering there’s a discretion to underline specifics, slowthai is certainly ready, willing and definitely able to highlight pertinent and personal concerns on this record. Brutally honest and amusingly witty with his flow, aggressive and dynamic with his production work, and captivatingly appealing with his charm and charisma, all taken together it assembles a hugely impressive, compelling and socially important listen. And whilst it’s a damning verdict on the current climate, all hope is not surrendered – after all, a full scale disavow of Britain does not feel like it’s reached in his prose. In moments, formed with a reflectively sentimental tone to British culture and its peculiarities, it serves as a love letter to being British, as a way to connect all categories, tribes and people. While the proclamation is that there’s nothing great about Britain, it doesn’t mean that it’s not still pretty good. Provided people and politicians can all strive to do a little better.