While Sorry may not be oversharers in interviews, over the past three years the opposite has been true with their music. School friends Asha Lorenz and Louis O’Bryen, the duo at the nucleus of the project, began making music in 2014. From 2017 onwards – now christened Sorry after going under the name FISH for a bit – they have dispensed a steady trickle of demos, singles and audio/visual mixtapes that has rarely paused.

However, 925, their debut album proper, presents an opportunity for the north London outfit – important to distinguish that since they’re often grouped with the ‘south London’ scene spearheaded by Goat Girl and Shame – to take stock.

But that’s not what they’ve done. Or, at least, that’s not what it feels like they’ve done. The pair have spoken in the past about how while superficially they’re considered to possess all the normative tickboxes of a guitar band but that their approach is more akin to a spontaneous bedroom producer: write it, cut it, share it. Above anything, 925 retains that instinctive feel; maybe that’s because they shunned a grand studio and made it at home.

Consequently nothing here is overly ponderous. Songs are moments. Scenes. Sometimes they’re about dreamt-up characters like the opener ‘Right Around The Clock’, Louis singing “she’s all dolled up like a movie star”. Other times it’s tongue-in-cheek comments on clichéd excess: “I want drugs and drugs and drugs” on ‘More’.

Musically it all feels distinctively, and refreshingly, out of step with the current proliferation of politico-post-punk. The sound has more in common with the mechanical thrust of Garbage’s ‘Version 2.0’ or The Cure’s Japanese Whispers than anything off, say, Schlagenheim. These are songs built around sizable melodic choruses, but still manage to be idiosyncratic – like Asha’s vomiting “yuck” utterance on ‘Starstruck’, the unexpected, bass-powered swerve ‘Wolf’ takes or the joyful theft from Louis Armstrong’s ‘What A Wonderful World’ that distinguishes ‘As The Sun Sets’.

Sorry also deliberately invite listeners’ projections onto their songs: “genderless” is how Asha recently described her creations. A sad pretty love song like ‘Heather’ perhaps captures that best, Asha and Louis trading lines: “what’s a boy to do / what’s a girl to do?”. Same goes for ‘Snakes’: “I never thought about you in your underwear,” sings Asha. “Because I never really cared what was under there.”

And while a debut album represents a significant chapter in any band’s book – and this is a really good one – you get the sense that Sorry are comfortable with the notion of change: that tomorrow they might be something different. 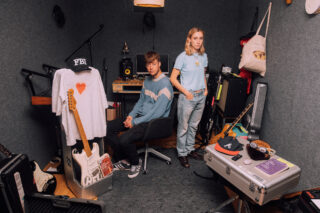