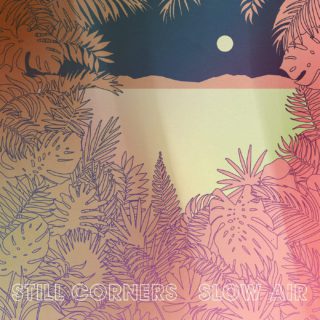 The American wilderness – may it be the Texas valleys, California’s national parks or the Arizona deserts – has formed the artistic backdrop for so many projects over the years that it’s almost beyond cliché. Crossing those wide spaces becomes a soul changing experience: the atavistic rejoice in getting back in contact with Mother Nature after, usually, an initial struggle.

London duo Still Corners are among the latest to take to America (they’re now based in Woodstock, NY) in search for inspiration.

Written in the hills around Austin, but inspired by some country-wide trips, ‘Slow Air’ sees the duo getting back to their original guitar-driven psychedelia: brooding, trembling and scorching hot, just like midday in the punishing Texan heat, filled with silence and Fata Morgana mirages. That said, their more recent love for synth-filled dream-pop still shows in the 10 tracks (‘Whisper’, ‘Fade Out’), but the atmosphere isn’t lost. Tessa Murray’s vocals are ethereal rather than ghostly. There’s some classic, soul-searching desert songwriting going on, but a drastic shift in location hasn’t resulted in a wholesale change in sound.