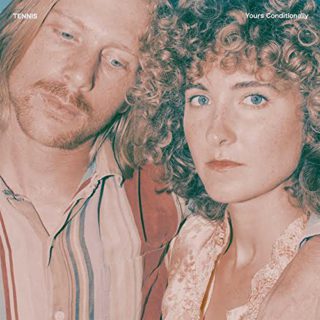 Tennis have come full circle with their fourth album.

The husband and wife duo of Alaina Moore and Patrick Riley recorded their debut after returning from a sailing expedition in 2011. For ‘Yours Conditionally’ they went back to their nautical past in order to reinvigorate the present, with part of it written at sea.

If it sounds like a band that’s running out of ideas then these 10 tracks dispel such an idea. They may have started life as a dream-pop band that were criticised for their lack of personality but they’ve developed into a more assured proposition.

Many of these tracks still are dream-pop, with the softly shimmering melodies on ‘Fields Of Blue’ being the sonic equivalent of a soft focus 70’s photo. ‘Please Don’t Ruin This For Me’, meanwhile, strips away the harmonies and miniature keyboard symphonies for a more straightforward guitar sound.

It’s a gauziness that suits Moore’s sweetly bland vocals and lyrics that can be so personal it feels like eavesdropping (“Sweet summer morning when you made me your wife,” coos ‘Matrimony’).

They’ve nonetheless added musical weight to their classic songwriting. There are deliberately tinny drum patterns and bass lines that just start to bend with distortion, creating a countrified, indie-dance vibe that’s reminiscent of The Cardigans on ‘My Emotions Are Blinding’ and ‘Ladies Don’t Play Guitar’.

This latter, along with the country twang of ‘Modern Woman’ adds a lyrical punch, swapping the autobiographical for a touch of feminism (“I can be the archetype of whatever you’re feeling,” runs the former ironically).

It’s a sense of personal integrity that’s also present in the album title – this is no unconditional love – and it’s one that gives the band backbone even when there’s tweeness to their musical sweetness.