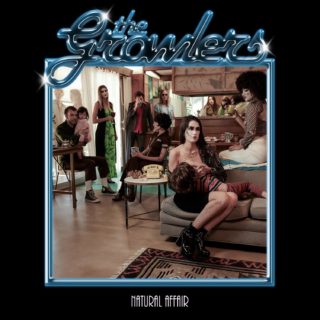 For as long as their battered old Converse have patrolled California’s sandy beaches, The Growlers have been busy paving the way for hordes of ’60s revivalist bands following eagerly at their heels. All trudging alongside the next, each with matching variations of sun-kissed garage rock, it’s a well-established formula and one that’s systematically captured the minds of a generation of washed out, weed-smoking college kids. But despite the likeness of their many duplicate counterparts, The Growlers have always tried to keep one leg firmly outside the box.

Following on from their 2016, Julian Casablancas produced album City Club, The Growlers return to spotlight is this time padded by a firm ’80s synth pop appeal. The more they’ve progressed, the less they’ve embraced that twangy DIY aesthetic. Their new album Natural Affair forms a complete hotchpotch of polished pop songs that zigzags its way through love, social media and gender constructs – some themes more fully formed than others.

Though it’s hard to not be somewhat drawn in by Brooks Nielsen’s fixed tone of nonchalance, even if Natural Affair does feel a little bit muddled. Credit where it’s due, there’s always quite a lot going on. The Growlers knock away one track after the other, each taking on different forms of shimmering pop production and sleezy guitar lines. Nielsen rolls out ‘Pulp Of You’ and ‘Shadow Woman’, songs that both serenade his wife before discussing his contempt for online culture on ‘Social Man’. The later tracks explore Nielsen’s own psyche through slower bouts of melancholy, but nothing sticks around for too long on this breezy selection of mismatches.