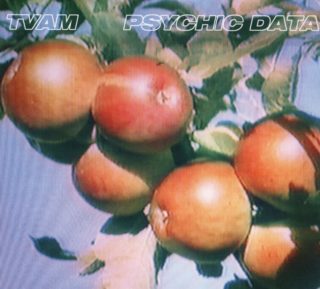 TVAM, aka Joe Oxley, is one of those post-Internet ‘bedroom producers’ that we’ve heard all about for the last five year. He may be mysterious. He may only exist through blurry photos attached to press packs. But ‘Psychic Data’, his debut record, is a proper, rabid statement. The anonymity that proliferates so-called ‘bedroom projects’ – particularly the post-Ariel Pink dream-pop that flooded the Internet in the early 2010s – is wholly absent from ‘Psychic Data’. It’s a cold-blooded flank of digital brutalism, an industrialised pop record that throbs and pulses with an infectious, entrancing haze that’s instantly addictive. Not just a fantastic record, but a cutting, self-aware exploration into guitar music’s toxic obsession with the past.

“I’m sick of nostalgia. There’s a real sadness at the heart of it. We’re obsessed with our pop culture past,” Oxley garbles in the press release: “…and I’m guiltier than most other people.” It’s easy to trace the influences of TVAM. Suicide, NEU!, Big Black, Sonic Youth… all the good stuff. But Oxley isn’t content to sit back and make a faithful reinterpretation of these; ‘Psychic Data’ is no exercise in warm and comforting record collector pop. TVAM is characterised by a certain kind of discontent, a venomous version of nostalgia – the sheets of MBV noise are not euphoric but chilling, and the popping funk bass on the album’s biggest banger, ‘Porsche Majeure’, is almost deliberately corny.

Despite the complex idea of nostalgia woven throughout the album, the listening experience isn’t distractingly deep. At most times, for all it’s cynicism, it’s just roaring, great fun.