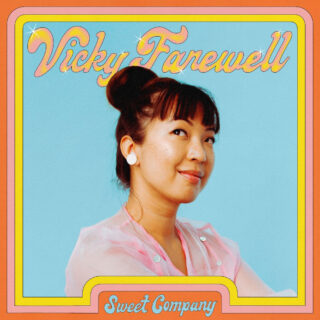 Alongside spoken-word punk and electronic-tinged dance-rock, syrupy sadboy pop seems to be one of the main musical trends to emerge out of the past half a decade. And it’s a trope we’ve all seen many times before: baggy trouser-clad man with floppy hair holds his guitar and sings about a string of failed relationships over the top of sticky-sweet trip-hop rhythms. But, on her debut solo album, it’s one Vicky Farewell grabs with both hands and flips on its head.

Sonically, the easiest comparisons to make when talking about Sweet Company would be to these self-styled sadboys: gauzy instrumental opener ‘Prelude’ is a Mac DeMarco-tinged; while the glistening pop track ‘Kakashi (All of the Time)’ is subtly reminiscent of an early Rex Orange County. But, Farewell’s sleek take on gooey chiffon pop – updated with a less gloomy subject matter, a polished approach to production and credits for writing, arranging and engineering the entire thing herself – proves that low-slung grooves and sugary pop beats aren’t just reserved for the likes of woe-is-me men.

Buzzing title track ‘Sweet Company’ is a wonky and luscious cut of floaty dream-pop, complete with soft twangy guitars and lush vocal harmonies that boast Farewell’s breadth as a solo artist, while the cloying melodies, lo-fi vocals and twinkling synths on ‘Believe Me’ mimic the blurry vision and saccharine air of an adolescent house party. ‘Forever’ is a bit retro-tinted with fully fleshed out melodies and romantic grooves reminiscent of a ’70s gameshow or a short ride in an old-fashioned elevator, whilst ‘Are We OK?’ wades through a swirling blend of loaded vocal harmonies and silky-soft grooves.

With its only pitfall being perhaps the fact it’s over way too soon, Sweet Company is a masterclass in luscious, lackadaisical pop. Like a waft of honeyed perfume or an oozing, ambrosial dessert melting in the sun on a summer’s day, this is an album that shimmers as it piques the senses and hangs in the air long after it’s finished.