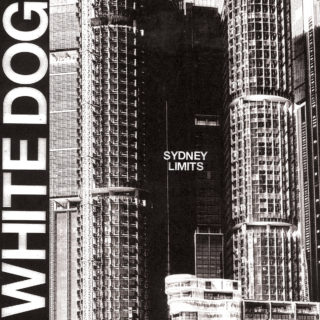 I went to Sydney recently. It seemed like they had it all there – parks so manicured they look like digital renders, a pristine bay with a couple of blockbuster world sites on the waterfront and this fiery ball in the sky they call the sun. (Australians, I learned, like to make jokes about the British and the sun, so that one’s for them.)

It’s one of those places that you come back from wowed that “they’ve just got a really good work/leisure balance there, y’know?” You walk around Sydney as a tourist in a happy daze of pure holiday… then you start to resent the place because it’s not yours, and for no good reason. It’s a veneer, of course, and just as visitors to London marvel at Westminster Abbey unaware of the understaffed NHS surgeries of Wapping, the suburbs of beautiful Sydney aren’t without their everyday people and everyday issues. “A cesspit of high costs and low value,” as hardcore punk band White Dog put it, and ‘Sydney Limits’ is an aggressive debut album about living in a world city that’s becoming bought up by the planet’s super rich.

You have to lean into singer Sam’s classic DC hardcore bark while simultaneously baring the brunt of White Dog’s single-setting-aggression in order to pick out his opening lyrics that set ‘Sydney Limits’’s agenda. On the title track I’m pretty sure he’s shouting “Privileged people. No heart. Now soul. No more.” Then, “Restricted freedom.” The 1:01 track is more like a war chant than a song, and over the remaining 27 minutes of the album the band manage to get through another 15 tracks of punk indebted to the likes of Black Flag, from the up/down strike of the snare drum to the power riffs and how the rest of the band join in on vocals at the chorus on songs like ‘Beyond Repair’ and ‘Downhill’.

For such a short record it really does feel relentless, and while it’s safe to say that you’ve probably heard albums very similar in tone and style to this before (Pissed Jeans come to mind in more recent years), White Dog also managed to chuck a fair amount of dynamic elements into the fury, like the field recordings of people saying “fuck off” and dogs barking at the end of ‘Neck Up’, the dropping of all guitars on ‘Hard For You’ and the sludgy groove of the much slower bookends on ‘These People’.

It’s nice to go away, but it’s always nice to come home, isn’t it?