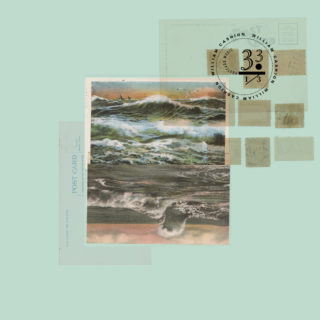 William Cashion, bassist for the indie-rock band Future Islands, has struck out on his own with a debut solo album. Postcard Music is an 11-track instrumental album that experiments with the boundaries of time and motion. Inspired by the ocean and a newfound meditation practice, Cashion has succeeded in creating a thought-provoking and redolent record.

There are a few tracks that stand out as particularly strong expressions, and serve as reminders of the communicative power of music. Cashion’s interpretation of the progression of time is felt mostly effectively in ‘Whalehead’. This expansive, undulating song is like a sonic presentation of the first twenty years of the new millennium. A solid, wavy bassline serves as the foundation for the unsuppressed, sweeping tendrils of melody reaching ahead.

‘Twin’ and ‘Piña Rosa’ both succeed in being energetic tracks that deal with time and motion, one charging forward, one harkening to the past with a vaguely retro string performance. The album segues to ‘South Atlantic’, slow, pensive, but grounded and sturdy, and feeling like a natural conclusion to the record. If you close your eyes, you can almost see the ocean, currents and tides swiftly moving towards you and sailing towards an unknown future.

The only hiccup to be found is ‘Vizcaya’, which goes on for nearly eight minutes, in a too-long attempt to build a horizon of sound creeping forward like a quiet sunrise. Unfortunately the track doesn’t really deliver, but instead interrupts the motion and exploration the rest of the album steadily builds. While the months-long journey and experimentation from Cashion is interesting and did lead to some great music, perhaps this part of the process didn’t need to make the final cut.