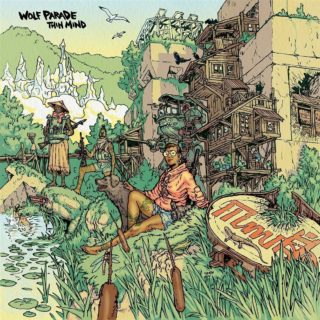 “How do you deal with the constant barrage of having your opinions swayed by all these different actors when you don’t know who they are or what their purpose is?” asks Wolf Parade’s Aren Thompson, discussing the Canadian group’s fifth album, ‘Thin Mind’. “There is no normal anymore.” This informs an album that looks at modern anxieties and darknesses of technology and pervasive anxiety at world events.

For the most part, it’s an expansive and vigorous listen. ‘Julia Take Your Man Home’ sees Wolf Parade look at toxic masculinity, with lyricists Spencer Krug and Dan Boeckner imaging the worst versions of themselves – the gurning party bore showing up their partner, but who will say sorry tomorrow morning. It’s relevant without being preachy or on the nose – and that propulsive bass groove!

Indeed, ‘Thin Mind’ may see Wolf Parade at their lyrically most oblique and questioning, but sonically it’s unexpectedly anthemic, heavy on the shimmering synths and electronic drums, as on ‘Out of Control’, where Krug’s usually confident vocal allows itself to falter; reedy and affecting. “I don’t want to live in a static age,” he says on the soaring standout ‘The Static Age’, and he’s right – but how to deal with such flux is another question.