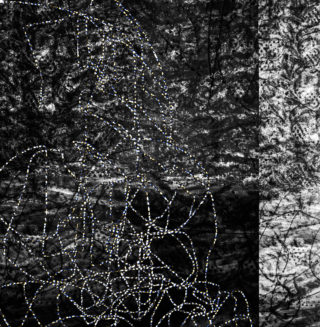 The sheer scale of Freedom, the new project from American academic and sound artist Yvette Janine Jackson, is breath-taking. The first piece, ‘Destination Freedom’, is built around three ‘scenes’ which overlap and play off one another, respectively set inside a slave ship, in the middle of an indeterminate journey, and in outer space. The second piece, ‘Invisible People’, is ostensibly a radio opera, but in practice it has more in common with the cut-up experiments of William Burroughs and the vocal loops of Steve Reich than anything you’re likely to encounter on Radio 4 any time soon.

Both pieces are dense, layered, and disorientating. Part historical study, part Afrofuturist counterfactual, ‘Destination Freedom’ seeks to provide an account of African-American life via marine field recordings, caustic electronics and a final, weightless sense of release; ‘Invisible People’ is a little less abstract – its samples of speech and commotion more easily interpreted, as its protagonists engage in the debate surrounding Barack Obama’s legalisation of same-sex marriage in 2015 – but no less complex, wrangling with a range of African-American perspectives on the president’s conduct. These samples are interspersed with passages of relatively straightforward jazz and gospel piano; brief, punctuating clips that undergird the diffuse ideas in play here.

Freedom is an uneasy listen, but one that feels essential in its challenge to mainstream liberal discourses of race and identity. It offers little in the way of solutions, instead asking new questions and problematising familiar ideas – for that alone, it is striking.