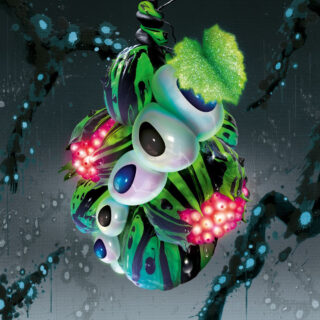 Ziúr’s music is lucid and physical when you’re inside of it, and ineffable when you’re not. That dreamlike pull comes from her ability to whittle down a song until it just about falls apart, while somehow keeping the feeling intact. I can’t sing a melody line from her third-full length album, Antifate. All the motifs are there somewhere, floating in my memory until I try to recall them. The dark, deconstructed sound of the album makes her a natural fit for the PAN record label, as does her strong roots in Berlin’s club scene, though Antifate is her least club-leaning album.

Instead, it takes its inspiration from medieval myth to conjure a strong sense of place. Its title is an abstract reference to Cockaigne, a land of plenty where “wine flows freely and houses are made of cake”,  a place peasants dreamt up for comfort. The utopian backdrop makes for a great playground for Ziúr to start from, while continuing the sharp political threads that are present in her work.

Rather than going for a maximalist, overblown sound to represent her land of plenty, Antifate is commandingly restrained. On opener ‘Alive, Unless?’, the ricocheted drums that ground the song still feel like fragments of a whole. ‘Aid What It Is’ is a mangled and slippery, like an alien interpretation of a trip-hop club night.

There are parties and grand coronations lurking underneath these decayed tracks, and Ziúr is confident enough in her sound to have us fill in the blanks. When a groove does pull together to give the full picture, like on the menacing back-half of ‘Sister Lava’, it’s immensely gratifying.

Individual sounds provide the same satisfaction, like the bright ’80s powerchords that shine through on ‘Gravity is Gravity…’, or the lullaby flutes that bloom on closer ‘The Carry’.

Like all dreams, Antifate is an introspective and personal expedition. The dense references to other musical eras and a contorted approach to songwriting mean that the places we’ll dream up listening to it are going to be unique to us. Unlike the dreamworld, Ziúr has created place we can recall whenever we want, just by giving it another spin.