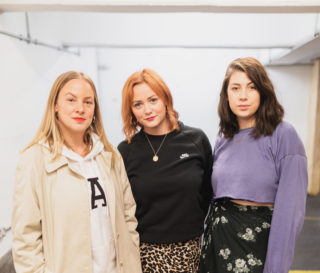 The radio station developing talent from the ground up

Traditional radio is in trouble. Listener figures are haemorrhaging, stations are beset by complaints over lack of gender representation and there’s pressure over the pay of presenters.

It’s the perfect maelstrom in which to launch a new community-based station that seeks to offer a genuine alternative. With its youthful, neon logo and ego-free presenters, the female-led Foundation FM aims to create a safe space that focuses on inclusivity and nurturing emerging underground talent.

Based in Peckham, the station started broadcasting a fresh mix of rap, grime, and R&B last week (Monday 5 November). Marketed as ‘12 hours of your favourite women’ – it’s on air between 10am-10pm – the schedule is led by a diverse group of female and LGTBQI+ presenters. This includes electronic musician Kelly Lee Owens and the collective Women In Fashion.

Its very first track – ‘Ladies’ by rising grime MC Slowthai – intentionally dispelled any notions that female-led was a euphemism for female-only. Instead its playlist is akin to the cooler, younger sister of Radio 1Xtra. This makes sense given that two of its founding members, Ami Bennett (above, middle) and Frankie Wells, gained experience with the BBC station (as Executive Producer and Team Assistant, respectively).

Bennett gives the lowdown on the station while Wells and national radio plugger Becky Richardson – the third founder – wrap up after the first week of broadcasting.

Tell me about the background to Foundation FM. Where did the idea come from, what was the timeframe and what were the challenges of setting up a new station?

It started with Becky and Frankie, who were working together at the time, and they had the original idea for it back in April. I’ve known Becky for five or six years and I bumped into her on the Tube in about May and she was like ‘we’re starting a community radio station [that’s] going to be female-led.’ And I was like ‘that’s incredible, let me know if I can ever help,’ because I’ve worked in national radio for a number of years. Then I went along to a meeting and we didn’t really have a conversation about it, I was just kind of in!

There have been a few bumps on the road but for the most part it’s gone really well. I think some of the challenges are maybe things we hadn’t anticipated. The things we were really worried about turned out to be things we didn’t need to worry about. So we were really stressing about how we were going to get presenters to commit but in fact we found ourselves in a position where we’ve got too many people and not enough space. It’s a nice place to be in but obviously it means that we’re trying to find space for everybody.

I think there were just complicated, fiddly bits that we hadn’t really accounted for like how long it takes to build a studio, for example. I think we’d underestimated that a lot of stuff has to be made to order. It’s definitely been a learning curve for all of us. Learning about the technical stuff, the licences and all of that kind of stuff.

All three of the station’s founders have got prior industry experience. How did you draw on that when setting up the station?

What’s been really nice is that between the three of us, we all have very different experiences of radio. So I come from a national music radio background. Becky is a music plugger, a radio plugger and an artist manager. Frankie has a really strong background in community radio. We’ve all been able to help each other out with different things.

I don’t know anything about how community radio works or how it’s run, so that kind of sets a precedent for where we want to be in terms of between community radio and national radio. And Becky comes in and she knows loads about the radio industry in terms of what kind of music it is that we should be playing, so she has a lot of input in terms of our playlist.

We all have a different part to play, but ultimately we make all of the decisions together, which has been really nice. It’s great to work with such an amazing team.

Traditional stations, such as BBC, have struggled with gender representation and fair pay. Alternatives, such as Radar Radio, closed due to allegations of harassment and homophobia. How will Foundation FM avoid such pitfalls?

We’re female-led but that also includes diverse people who support the message of what we’re trying to promote. I guess it’s just about putting people who might have been traditionally underrepresented in mainstream, commercial, community, BBC radio and television to the forefront at the very first opportunity. So it’s not just about women, but we are very strong about being female led.

In terms of allegations, I wouldn’t want to comment too much on stuff [Wells was night producer at Radar Radio]. But we have a zero tolerance policy which incorporates anything from intimidation, harassment, homophobia, racism. Like a whole manner of things which everyone who comes into our studio has to adhere to otherwise they’ll be asked to leave. It’s a respectful place and it should be a fun place as well.

The station has shaken up traditional programming by only having two regular slots: Brunch with Kamilla and Happy Hour with Ellie Prohan. The rest of the schedule has a rotation of presenters, such as Soph LS (aka as The Nasty Poet). What’s the thinking behind that and how much artistic control do the presenters have over their shows?

In terms of Brunch and Happy Hour it was more about representing our audience and what we feel they would be doing at those times. Perhaps our audience don’t want to get up at 6am so that they can hear breakfast radio, and 10 ‘til 1 is kind of brunch time. It’s the beginning of your day whether you’re at work or school or college. It’s relaxed and eases you into your day with some fun stuff, good guests and some nice music.

I guess Happy Hour is the same sentiment. It’s the end of the day, getting you through those last few hours or accompanying you on your way home.

[Soph LS is] the only specific spoken word and poetry show. For her that’s about representing her art and that’s kind of what we want to do for everyone on the station. You’re coming to us. We found you and sought you out because we think you are doing something really interesting and creative and we would love to give you a further platform in which to do that.

The station is built on the desire to support and hone new talent. How will you measure that in terms of success, and when you started your career what industry support were you given?

I wouldn’t say we’re doing anything to measure success but I would say that we are developing talent from the ground up. We would love to see people go on and do other things, if that means they want to be the breakfast presenter on Radio 1, if that means they want to be on television we absolutely want to support people to get there. We don’t anticipate that people will be with us forever.

I think we’ve all had people in our careers that have given us a leg up at one point, or have vouched for us and I think that’s important. And it’s important for us as people to support other people in that way to give a bit back.

Sam Gregory, of Big Red Talent [a talent management company based in London], has been really integral in my career. He gave me an opportunity really early doors. He’s someone who’s always supported me, given me lots of advice and been like a mentor for me.

What can community and underground radio stations such as Foundation FM offer that traditional ones can’t?

I think that because we have a little more freedom we’re a little less tied down by schedules. The commercial radio stations have only got a finite amount of space. There are only so many hours in the day and obviously we’re just starting off with 12 hours a day. We’ve got loads of opportunity to expand and feature new people, switch up our schedule at the last minute if we wanted to. I feel like there’s probably a bit more freedom to do that.

But also community radio is such a good space to breed new music, to breed new talent and we would like to be at the forefront of that in terms of presenting talent but also in terms of music talent and supporting that as well. Whether that’s male or female or whatever, we’re here for it.

Foundation FM is live on air from 10am to 10pm, every weekday, via www.foundation.fm