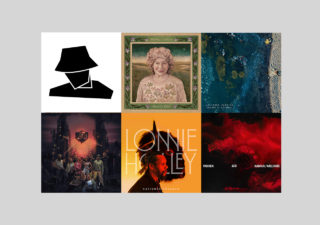 The leagues of apocalyptically-themed albums are thankfully thinning out – only one of this month’s best is sticking with that, and that’s from Protomartyr, which is hardly a change in style. Now you don’t have any football to watch for a few weeks – it temporarily distracted us from that huge, ongoing live music-shaped hole – here are the albums we recommend to fill the entertainment void. You can even line them all up, pick your favourite and make it a trophy, if you like.

Artist: Shirley Collins
Title: Heart’s Ease
Label: Domino
What is it? The second album in four years from one of the greatest English folk singers, regaining her confidence having not recorded an album for 38 years.
L&Q says: “Now that her status is secured, one could forgive a victory lap or even retreat into comfort, but Heart’s Ease is neither of those things; indeed, it goes some way further towards entrenching her unique position in British culture.”

Artist: Kamaal Williams
Title: Wu Hen
Label: Black Focus
What is it? The sophomore solo album from Henry Wu as Kamaal Williams, exploring his own British-Taiwanese heritage in an important chapter for Peckham jazz.
L&Q says: “Wu’s own virtuoso performance is the highlight; soul-searching jazz fusion soundtracks the spiritual conflict of yin and yang with slow-jams and Mahavishnu-esque optics, interrupted by bustling street skits and funk-fuelled breakbeat.”

Artist: Actress
Title: 88
Label: self-released
What is it? A 22-track Bandcamp-only prequel to the London producer’s highly-anticipated album Karma & Desire, out later this year, replete with PDFs and secret passwords.
L&Q says: “Actress’s ability to mine deep feeling out of the ruins of the dancefloor hasn’t been dampened. 88 is more understated than his last record, AZD, full of rumbling low end and ghostly textures that cloud most of everything, but it remains a dynamic, explorative experience.”

Artist: Bing & Ruth
Title: Species
Label: 4AD
What is it? An emotionally-rich fourth album from New York composer and pianist David Moore, exploring the sonic potentials of the Farfisa Organ.
L&Q says: “Species’ meditative compositions hit on the panoramic isolation of being out in the middle of nowhere, and revel in the detachment.”

Artist: Protomartyr
Title: Ultimate Success Today
Label: Domino
What is it? A post-political, post-ecological new album about total collapse from the well-decorated (L&Q Album of the Year 2017 award winning) Detroit punk five-piece.
L&Q says: “The band’s fifth studio album is everything you’d expect it to be: furious, unrelenting and pitch-black dark.”

Artist: Lianne La Havas
Title: Lianne La Havas
Label: Warner Music
What is it? The first album in half a decade from Lianne La Havas filled with more acutely written love songs than almost anyone else has managed this year, and a Radiohead cover.
L&Q says: “Her subtlety and precision both as a lyricist and singer manage to get to the root of swooning romance and painful heartbreak.”

Artist: Dehd
Title: Flower of Devotion
Label: Fire Talk
What is it? A maximalist utopia from the DIY Chicago three-piece that channels everything from reverb-heavy surf and garage to cosmic country.
L&Q says: “It’s striking how expansive Flower Of Devotion sounds given that Dehd made a mark by stripping away all but the most essential instrumentation.”

Artist: Lonnie Holley
Title: National Freedom
Label: Jagjaguwar
What is it? A five-track collaboration in 2014 between two kindred convention-breaking spirits in multi-media artist Lonnie Holley and the late great producer Richard Swift.
L&Q says: “What this EP offers us is another enthralling snapshot of America’s most singular bluesman, presented sumptuously and with trademark warmth by the still-peerless Swift.”

Artist: Crack Cloud
Title: Pain Olympics
Label: Meat Machine
What is it? A feral debut from the Vancouver art-collective founded as a method of recovery and artistic exploration, now with seven members and five guitars.
L&Q says: “Pain Olympics is an incendiary snapshot of a real musical force; from the rumbling balladry of ‘Something’s Gotta Give’, to the hurtling digital brutalism of ‘Tunnel Vision’, this is an unearthly garden of delights.”

Artist: Julianna Barwick
Title: Healing Is A Miracle
Label: Ninja Tune
What is it? An gently expansive label debut from the newly LA-based composer, more adventurous and willing to explore with collaborations from Jónsi, Nosaj Thing and Mary Lattimore.
L&Q says: “Ambient music is often seen as being crafted for moments of introspection or solitude, but Healing also feels extroverted, as if it wants to reach out and touch the world around it.”

Artist: Keleketla!
Title: Keleketla!
Label: Ahead of our Time
What is it? A musical meeting ground of jazz, Afrobeat and electronica, reaching out from Johannesburg to London, Lagos, L.A. and West Papua, helmed by Ninja Tune founders Coldcut.
L&Q says: “The energy that pulsates throughout the album, through the dubby hopefulness of ‘Broken Light’ to the cosmic ‘Shepherd’s Song’, is a good reminder of the constant energy that’s needed to keep a check on those in power and speak out when it’s being used unfairly.”

Artist: Black Bordello
Title: Black Bordello
Label: Self-released
What is it? A gothic, leftfield circus of jazz and cabaret from South London caught in its own experimental limbo.
L&Q says: “Simply calling Black Bordello’s self-titled debut album “genre-defying” doesn’t do it justice. This album is an exercise in world-building.”

Artist: Shackleton & Zimpel
Title: Primal Forms
Label: Cosmo Rhythmatic
What is it? Wacław Zimpel and Sam Shackleton strike up an incredible creative rapport on this expansive, visionary collaboration.
L&Q says: “There’s a sense throughout Primal Forms that everything could descend into chaos at any moment…”