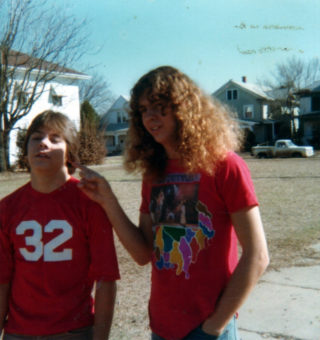 He revisits his teenage self for our latest Sweet 16 column

I’ve always had long hair. Freak hair, is that how you’d describe it? That’s a Led Zeppelin shirt in that photo. I actually embellished it with some of my own plastic paint. I’d go to school the next day and people would be like, “where’d you get that fucking shirt, man?”.

At this time I already had my own apartment in Oklahoma City. I was living with my girlfriend at the time whose father had been killed in a car accident. I didn’t know him, it’d happened before we got together. She was getting kicked out of the house and her aunt or somebody gives her $500 and says, “you gotta go get an apartment somewhere”. So I’m away from my family. I love my family, my folks and my brothers… I didn’t move out because I didn’t like them, it was just the situation.

I was selling marijuana, everybody that I knew, all my older brothers and stuff were all kind of buying and selling marijuana. I was able to get the main dealer to front me like a quarter pound of pot. I had a motorcycle, a couple of electric guitars, I was selling marijuana and living with my crazy girlfriend who had dropped out of high school. I didn’t really like selling the pot, I always sort of felt like, “urgh, one of these guys is going to come back with one of their friends with a gun and rob me”. I did it for a little while, not that long. I never really liked [pot] even though I was surrounded by it. I never really liked drugs. But back then my brothers and their friends they did everything all the time. Just everyday.

The big touring artists did come through Oklahoma City. The only groups we didn’t see back in the day would have been, like, The Beatles or Pink Floyd. I saw The Who, I saw The Rolling Stones. Specifically at 16 if someone asked me what I was gonna do I would say, “I’m gonna be a rockstar. Fuck it.” It wasn’t about music. That was the part that came later.

Punk rock, at that point, is about to happen. I couldn’t play a lot of this music. A bit later punk rock kinda came along and freed up that dilemma. The groups that would come through town would just say, “just write your own music”. I remember The Minutemen stayed at my house and we stayed up talking all night, and Sonic Youth came through town and we talked about music and they were like, “fuck it, write your own music, man. Make up your own thing”. I owe a lot of a love and gratitude to The Clash, The Sex Pistols and Echo And The Bunnymen – the stuff that turned us on to a new way of making music.

I was working at a restaurant called Long John Silver’s. It’s specialty is doing fish and chips like you get in Britain. It’s fucking good. Scientifically they looked at what it was made of and I think it was the most unhealthy fast food in America for about 10 years in a row, which meant it was absolutely the most popular shit. I was happy to have this job. I worked on Mondays and Wednesdays. I had like 80 or 90 dollars a week. I had made a sort of agreement with my teachers at school that if I wasn’t there for those days I would make it up.

I loved this job. I ended up working there something like 11 years. I started there in 1977, that’s when I’m 16 – it sounds ancient now – and worked until almost 1990. A long time. About a year after working there we had gotten robbed one night. Three guys came in with big fucking guns. They barged into the back about five minutes before we closed. Around the same time there had been a lot of robberies in Oklahoma City, it was a really depressed economy. Almost every week someone was killed getting robbed at a restaurant.

I’m laid on the floor knowing in my mind they’re going to kill us, this is all that we’ve been reading about. I was thinking I’ll be on the news tonight because I’m dead. My mum was waiting for me. That was the night that I was going to ride my bicycle home to my mother’s house to drop off my uniform. It was just the saddest thing ever. You’re just so penetrated by this doom. It was heavy.

When they didn’t kill us, I’ve said this before, but I never realised up until then that I was alive. I never realised what the price of your life was. Afterwards, for about six months, I probably walked around without these stupid petty hang ups that you have when you’re a teenager. All these things I’ve been worrying about they’re nothing compared to getting your head blown off. It was wonderful. I think this near death experience sort of elevated me a little bit and I knew then that I really did want to pursue this music. It wasn’t just ‘rockstar’ anymore. It changed my life.