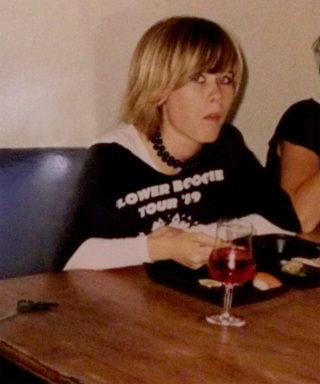 When I was 16 years old I lived with my mom, Evalena, and sister, Maria, in the bohemian neighbourhood Haga in Gothenburg. Haga had at this time transformed from being a crazy hippie/drug-dealing/artist area to a quiet, boring and more expensive family area. The prices of the buildings were increasing as Haga became a tourist attraction and all of a sudden the Bohemians still living there became millionaires. I remember that I despised this new Haga. I thought it lacked life and spirit. I had loved the old Haga with rough, worn down wood houses, trashy record stores and art galleries; I had loved the weird mix of people. My father had a label there called RADIUM 226.05 that me and my sister used to hang out at. It was located in a beautiful old brick building that had once been a washing space for poor people to avoid the spread of cholera. When I was 16 the label had shut down and the building transformed from a creative art space to a SPA. I remembered I felt extremely disappointed with the transformation. Gothenburg was changing rapidly and the childhood place that I liked so much was being lost.

My passion for music started early and at the age of 16 I liked all sorts of genres. I grew up with experimental music and classical music, the music of my mom and dad. Then between 11 and 13 I got into hip hop and RnB, but at 16 I started to create a musical foundation that I still lean on today. I found Diamanda Galás, Patti Smith, PJ Harvey, Tim/Jeff Buckley, Thom Yorke, Björk, Jefferson Airplane, Janis Joplin, Joy Division, Cocteau Twins, The Smiths, Black Sabbath and AC/DC. No one really understood my taste, and as many people tried to classify me I felt that I was neither goth, emo, rock, metal, soul or pop. This was reflected in my clothes. Whatever style I seemed to be wearing for the day, you could always see other styles shine through. I simply followed my taste and combined whatever clothes I thought were interesting.

As I began to explore and follow the music media I remember that I didn’t like the coverage of female artists. I rejected how women were portrayed; I felt that I couldn’t relate to the sexualisation and objectification of them. I liked better how men were portrayed, in their normal clothes with normal faces. I could take them seriously, and they seemed to be taken seriously, unlike the women. The portraits of female musicians made me feel disturbed, stressed, sad and angry because I thought it was so extremely degrading, and not only for the artist posing but also for me as a woman. I felt betrayed and I didn’t know who to be angry with, the women posing, the media shaping them, or the boys liking them. Sometimes I was angry at me being angry at them. As I didn’t want to, or simply couldn’t, play along with the norms, I became an oddball and my creative space became my rescue place. When I played music I felt reinforced and strong. Untouchable.

When I started music college at age 16 I met many like minded people, it was a relief. Secondary school had been horrible for me, so college became a turning point in many ways. I felt independent and free and inspired like never before. I found friends. I met four of my current band members there; Joel Fabiansson, Karl Vento, David Sabel and Filip Leyman. Karl Vento was the first one to ask me if I wanted to start a band with him. Our name was Vento and we became quite popular at school playing graduations and parties. Filip Leyman then joined our group of friends and it turned out he was (already then) a producer. He produced our first EP. Later Filip, Karl and I started a pop band strongly inspired by The Sundays, The Smiths and Cocteau Twins. David was a close friend. He had the best energy but we never played together, I never understood his influences or interests until just recently. Joel Fabiansson was in my parallel class and we had different social groups so we weren’t close, but I admired him. One time, during a school concert he completely blew me away when he did one of the best Frank Zappa interpretations I had, and still have, ever seen. He played Zappa guitar and sang Zappa vocals flawlessly. I had no idea that there was such a talanted boy in my school. It is because of this Frank Zappa interpretation I decided to ask Joel if he wanted to join my band in 2014.

To sum it up: today I asked my mom how I was when I was 16 years old. She said: “you took life seriously but you were partying and being prankish, you sang and played piano, you were sketching frenetically on all of your notebooks, you had a period when you went to the court and listened to trials while making paintings of the criminals, you loved Dostojevskij, and you had big plans.” She also said that I seemed to be a happy girl and most of the time I believe I was.

Read previous Sweet 16 columns with the likes of Johnny Marr, Shirley Manson, Matt Helders and many more. Or listen to our Sweet 16 live podcast series.