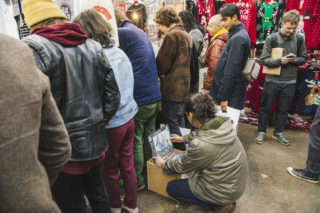 For the Independent Label Market, like everyone else, this has been an unusual year. From their initial events in London to markets in Los Angeles, Berlin and more, ILM have established themselves as staples of the DIY music calendar since they began in 2011; yet even with their impressive rise and reputation, the events of 2020 have forced them to get a little creative. As they ready their Christmas celebrations, we catch up with founder Joe Daniel to hear how they’re planning to see out 2020.

ILM has become a real institution in the last few years. How has it been to have to pause your IRL events this year?

It’s been a weird time. Frustrating not to be able to host real world events, we’ve really missed it! We did an online event in July, 24 hours of exclusive deals and special products with labels via Bandcamp Friday, alongside artist live streams and DJ sets from all over the world via ILM platforms. It meant that labels from Asia and Africa could join us which was exciting as we haven’t been to those places in real life. Great to make those connections, and hopefully sow the seeds for some events in those places in the future.

What gave you the initial idea of organising the ILM Advent Calendar?

During the period in September/October when it seemed as though coronavirus was abating we had been planning a return to markets for Christmas. We had it all booked and were one day away from launching when news of the second lockdown was announced. Disappointing obviously but we still wanted to do something and so came up with the Advent Calendar idea so that we could still do something with the labels who were going to do the Winter Market.

Great to see you’re taking over Tim’s Twitter Listening Party – can you tell us about the albums/guests you’ve chosen and why they’re so special?

Yes, it’s such a positive thing in a year with a lot of negative vibes. I had enjoyed quite a few of them and so was very happy when Tim said he was up for us programming a few. We just asked artists whose albums we liked and labels who had been due to appear at the Winter market. I loved Keeley Forsyth’s album on The Leaf Label, and so was keen for her to take part. These New Puritans’ Hidden is going to be a particularly special one for me as the album was originally released on my old label Angular back in 2010.

The prizes for the Raffle are amazing, as is Crisis, the charity it’s raising money for. Could you tell us a little about the Raffle, and the work that Crisis does?

The raffle is a nice thing for us to be able to do. Labels have been so generous in donating some absolutely fantastic prizes. The lucky winners are going to have a lot of new records to get stuck into,  with many special releases that are hard to come by. Helping to tackle homelessness is a very good cause too. Amongst the many injustices that have worsened over the last ten years, including the need for food banks, child hunger, in work poverty, homelessness is something that is particularly harsh during winter. This year the Crisis frontline teams will be providing food and festive treats for those with insecure housing. They will also be on hand with emotional and wellbeing support, offering everything from Christmas games and advice to volunteer befrienders. Nutritious meals, somewhere to stay, help for the future – it will make such a difference to people, this winter especially.

What releases/activities from the labels involved in the Advent Calendar should we be looking out for?

There is some excellent stuff here, from flash sales and discount codes to really scarce items being gifted in the raffle that will be very exciting for fans of certain artists. A signed IDLES test pressing, a Björk picture disc, and a very very rare Big Thief 7” are all highlights that spring to mind.

2020 has obviously been a tricky year, but looking ahead, 2021 will mark ILM’s tenth birthday. How does that feel, and how has the market changed and grown in that time?

I can’t believe it’s been ten years! It feels good that a nice idea that was supposed to be a one off has managed to evolve into an established event and travel to some far-flung places. It’s been amazing to build up such a big network of labels all over the world and export the market to lots of other countries. It works differently in different places, sometimes there’s more of a live music element, or industry panel-type sessions. And in other places it’s as much of a networking exercise for the labels as it is a record buying experience. The fun part for us has been working out how to adapt the event depending on where it is.

How can people keep track of the Calendar as it unfolds, and get involved with the Raffle?

It’s all going on via our social media channels! And this Just Giving page is where the raffle is being hosted.