Few bands use dynamics quite as powerfully as this

It’s Sunday afternoon at End Of The Road, and everyone’s a bit rough around the edges. Seeing Deathcrash on a third consecutive hangover could go one of two ways: an invigorating shakeup, or a rude awakening. Happily, for me at least, it’s the former.

The London post-rock quartet are characteristically understated as they enter the Big Top stage, shrouded in gloom and dry ice. They reveal later that this is the biggest crowd they’ve ever played to, so you’d forgive them a little nervousness, but they just get on with the job, unfazed. They’re a workmanlike band in that way – slow, serious, unflashy, like their music. From the first note – an iron-wrought bass hit, dropped by Patrick Fitzgerald like a dumbbell by a weightlifter – they’re entirely focused on the task at hand, setting out with spare, deliberate percussion, uncoiling guitars, half-whispered vocals. The audience are with them every step, watching in rapt silence. 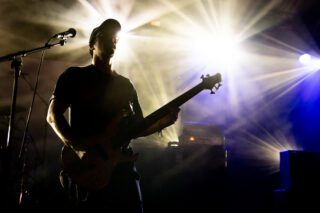 Then it hits. From the tense quiet of their opening, something erupts, less a pedal-stomp or cymbal crash than an explosion of meteorological scale. Sparks of feedback shear off each chord, heaved along by bass, almost overwhelming in its brute force. Then, as suddenly as it arrived, it dissipates. Relatively few contemporary rock bands pay the right amount of attention to dynamic range; fewer still are capable of harnessing contrasting levels of volume with the elegance and power that seems to come so naturally to Deathcrash. Hearing them flex those muscles through such a hefty soundsystem is an inescapably physical experience: one second they’re seem to be suspended in mid-air, floating on the near-silence that pervades their music; the next, they’re driving their instruments hard into the ground, wringing every last drop from them, and dragging you down with them.

Recent single ‘Unwind’ might be the purest distillation of their sound yet released, and live it carries the same import; Tiernan Banks’ vocals surge skyward, taking a rare step into both the limelight and his upper register, the crest of an enormous wave of low-end and distortion that soon crashes back over us and recedes into the distance. It’s an exhilarating experience – just what we needed at this point in the festival. 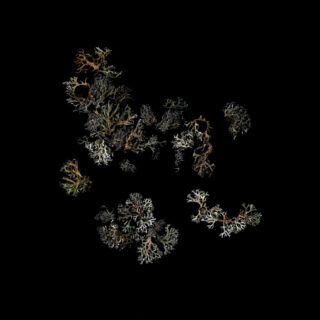 Deathcrash's debut LP is an embarrassment of emotional riches