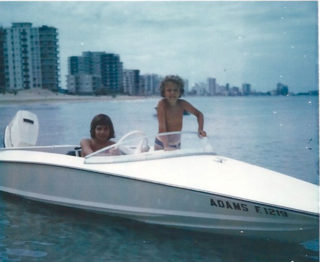 Gary Numan: This photo was taken on a family holiday in Cyprus. My Dad used to work for British Airways and we got 10% tickets. Then he left that job so we lost those cheap flights and started going to Weymouth instead. That’s my brother John on the right. He’s seven years younger.

Back home, we lived not far from Heathrow in a house on the London Road. Living near the airport probably fostered my love for aviation but I’ll never know for sure. I went to grammar school to begin with and got expelled for bad behaviour. Then I went to Stanwell Secondary School. By 16 I was going to Brooklands Technical College in Weybridge – a last-ditch attempt to get a few O Levels. That failed dismally because I got thrown out of there, too. So I came out of school with no qualifications whatsoever.

I’d already decided that music was for me. School offers you nothing for that. What you’re learning seems totally irrelevant to where you want your life to be going. On top of that I had Asperger’s [syndrome]. I had a problem with what I saw as the stupidity of certain levels of authority, so I rebelled against that. Just generally, puberty had kicked in, too. It created in me this desire to not engage with school – I just wanted out. I saw no point to it.

Luckily, my mum and dad were very forgiving and still supported me fantastically and enabled me to get underway with music. They paid for my recording sessions which got me my first demo. They were amazing. Without them I would never have got the record deal that started me on my way. I did let them down very badly, and they must have been incredibly disappointed. It’s all very well to be sitting at home talking about wanting to be a rock star but in truth how often does it happen? It’s like winning the lottery, isn’t it?

Many years later I found out that they’d sunk their entire life savings into getting me the equipment I needed to start off. They bought me a little Transit van, a P.A. system and a really beautiful guitar. When I got my deal with Beggars Banquet, the only reason they could sign me was because they didn’t need any money for me. I already had my own gear. Without my mum and dad being that involved, it would never have happened.

At 16, my music was becoming a slightly more genuine attempt at songs rather than three chords and some ridiculous Marc Bolan influenced stuff over the top of it. I was a massive T. Rex fan, so I was writing songs about unicorns and flowers for a while. At this point, I was getting towards the end of my Marc Bolan period, but hadn’t yet moved into my David Bowie period.

I had my own electric guitar by then. I’d spend hours upstairs. Small ego… [laughs] I had an entire wall of my room mirrored so I could practice my moves. I’d be miming to every record I loved. A few little flashing lights in the corner. Every night I’d be up there pretending I was doing gigs. Little microphone in front of me on a stand. If my mum came in I would go berserk! Sometimes I’d have friends come round and we’d all do it. We must have looked ridiculous, but I loved it.

My two interests were music and aeroplanes. I was quite a loner as well. I did spend an awful lot of time at home on my own. I was writing constantly – little stories, song lyrics, poetry.  That’s what I did. Very much a weird little home kid. Not many friends. A few, but not many. I didn’t really go out much. And if I did go out I would cycle down the end of the street where we lived to the airport. I’d hang out there for hours.

I just lay there with my bike, watching the planes come in and out dreaming about what I was going to do with my life. I spent a huge amount of time doing that. I don’t know if it annoyed my mum and dad or if it worried them. I was endlessly writing little notes, ideas and theories about what needed to be done so that when my time came I would put it all into place.

I was incredibly focussed on what I wanted out of life and where I was going. I don’t think I would change any of that, really. I don’t even think I’d suggest to myself that I tried harder at school. What I did, either by luck or by judgement, worked out. I had no career to fall back on, I had no qualifications that could have taken me in a different direction. I went into music so whole-heartedly because I had absolutely nothing else.

As told to Greg Cochrane