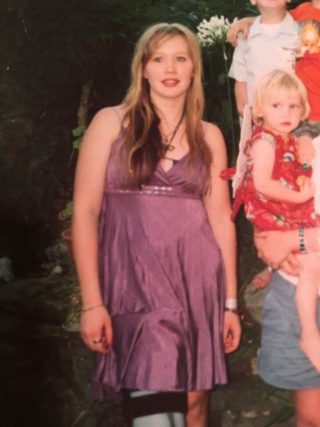 The Australian songwriter revisits her teenage self - a year spent getting injured playing sport, listening to Doris Day and Linkin Park

Julia Jacklin: This photo was taken in the front yard at my mum’s house, Christmas 2006. My right leg is in a full cast. I got it a couple of weeks before, and it was on for the whole of the summer, which was pretty excruciating, being 16 and it being 40 degrees in Australia.

I’d played in my school’s rugby team for the last 6 months – a group of us were starting to become some version of feminists and we went on a tirade about how there was no female rugby union team at my school, so we formed one. And it was really fun until I got really badly injured. It was a pretty bad tackle, where I tore my meniscus.

I was really sporty, which came from being where I was from in New South Wales. It was social capital at my school. I was really into athletics and soccer and hockey, and then rugby. It didn’t really continue once I got into music. I really enjoyed playing sport but it never really got me going or lit a fire in me. I guess I was just naturally good at it because I was very competitive. I got more and more fearless with my body, and I remember that tackle so well, and knowing in the moment that I should not have gone for it, because the girl was a lot bigger than me and I knew it was going to end badly as I was running at her. It made me realise for the first time that my actions have consequences. And so at a time when I was starting to sneak out and go to parties and rebel, I missed out that summer because I had this cast on.

I feel like I hear these stories all the time that go, ‘… and this is when I learned to play guitar.’ I didn’t have that epiphany. I probably just moped around, watched TV and pissed my mum off a lot listening to loud music.

I’m looking at my whole schtick here, like what I’m wearing and my hair, and how confusing that was. Where did that hairstyle come from!? Because that was a big thing. I think it came from Lindsay Lohan in Freaky Friday, or Hilary Duff – Avril Lavigne too – real clean popstars who were marketed to teenagers as rebels. I was listening to a really confusing mix of stuff. I was listening to Linkin Park a lot, but I was also into Radiohead, and also The Drifters and Doris Day – stuff that I’d grown up listening to. Then there was another side to me that was pretending to listen to music that I really didn’t like – I remember having lots of conversations about that band HIM, who to this day I’ve still not even listened to, but I pretended because I thought it was the height of coolness.

It was a really confusing time. I knew I wanted to do music, but I had no avenue to express that or figure it out. Nobody at my school did music; none of my family did. I was doing classical singing, but that wasn’t what I wanted to do, and I couldn’t get any of the lead parts in the school musical however much I tried. And I was really embarrassed about it too – I was embarrassed to sing in front of people, even though I really wanted to. I wished I had the courage to do it, but I’d get so nervous that my voice would shake too much and I’d get facial twitches, which stayed with me until the end of high school.

To be really honest, at that time in my life I was really obsessed with fitting in, and being cool and being liked by boys. I was quite superficial. I was into drinking and getting into mischief. But I had all of these interests – like I loved writing short stories – but none of my friends at the time were into creative things, so I felt like I had to squash that down and be the sporty party girl. That’s why I left that school and went to a school two hours away – because I was pretending to be this Blue Mountain sporty girl. It wasn’t me in any capacity. At that age you don’t really care about each other. We were all friends but we could be really cruel to each other in terms of our bodies and our personalities, and be really judgmental of each other. So as much as I felt successful at having friends, I always felt on edge around them. It’s something that a lot of teenage girls go through – not knowing what friendship really is.

To give you an idea of the vibe, a couple of years before I was in a group of 13 girls, and every week this one girl would call a group meeting, and we’d sit in a circle and air our grievances with each other. You’d sit there and hope that no one was going to say something awful about you. It’s so crazy to think of now, because I have all these supportive women in my life. When you’re a teenager, you don’t know what you shouldn’t put up with. 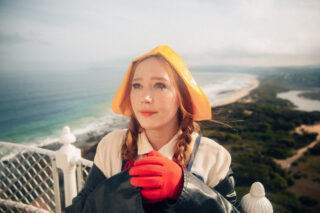