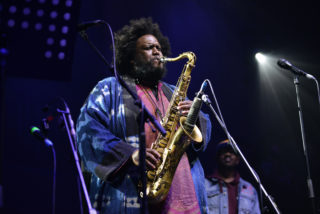 Is jazz going to save the world?

For the first time in the 21st Century, a contemporary jazz musician is filling medium-to-large venues with a young, non-jazz-specific audience. One glance around Manchester’s fabulous Albert Hall tonight confirms that it is spilling over not with a specialised group of bespoke connoisseurs, but with the typical clientele one finds on the alternative live music circuit.

That Kamasi Washington has been able to reach this demographic with his head-spinning space music speaks on the one hand to his impeccable connections in the music industry (he string-arranged Kendrick’s ‘To Pimp A Butterfly’ and has worked serially with Thundercat and Flying Lotus); but it also suggests that this form of music, perhaps once considered dusty and passé, is in actual fact teaming with life, and may even hold the key to unlocking the 2018 malaise.

For a high planes drifter like Washington, his first album, 2015’s three hour masterpiece ‘The Epic’, was a stunning introduction to a complex mind. However, given that the intervening three years have seen the world become increasingly harsh, it is no surprise that an artist capable of conjuring such metaphysically uplifting and mystifying music would arrive at a headspace that squarely confronts the difficult co-existence of his spiritual consciousness with the modern hard reality. That’s what’s on its way on June 22 when Washington releases his second album, ‘Heaven and Earth’. 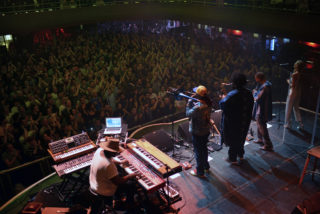 It is on display tonight when he and his seven-piece band launch into ‘Fists of Fury’, their interpolation of the theme to the eponymous 1972 Bruce Lee movie. Two furious, flailing drum solos, by Tony Austin and Robert Miller consecutively, and a bowed upright bass attack from Miles Mosley mirror the lyrics from Patrice Quinn’s lips: “Our time as victims is over/We will no longer ask for justice/Instead we will take our retribution”. It is sobering and Manchester knows it, but they are still dancing.

“Diversity is not to be tolerated, but celebrated,” are Washington’s words as he introduces ‘Truth’, a confounding fifteen-plus minute explosion of ecstasy in which he welcomes his father Rickey’s soprano saxophone to join Ryan Porter’s trombone and his own tenor sax in a triple-headed horn monster. Five different melodies spin and dive together in spectacular formation before our eyes, as audience members range from blissed reverie to full body animation. 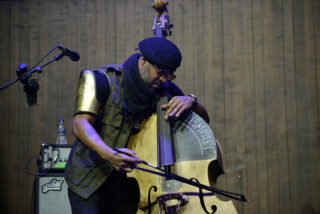 The ‘Heaven’ half of the new album is represented tonight in the form of ‘The Space Travelers Lullaby’, a far more enchanted, celestial concoction that features Rickey on flute and a keynote trombone solo from Porter, whilst keyboardist Brandon Coleman has several jaw-dropping moments of his own, notably on his own composition, ‘Giant Feelings’. By the time they conclude with ‘The Rhythm Changes’ from the first album, 105 minutes have evaporated.

Whether Washington proves to be the vanguard for a new wave of crossover jazz artists or just a glorious one-off, he is achieving what no other has in his field for some time. That he has done so without compromise is extraordinary.