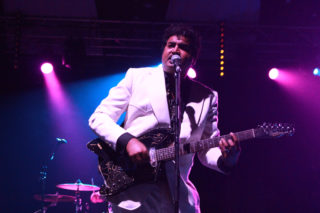 “I’ve got a song for you lovers – let the finger bangin’ begin,” is not the most subtle sentiment to introduce a love song but King Khan has never been an artist particularly concerned with such trivialities as subtlety. As he arrives on stage, his cape-wearing band lead first and he’s introduced as, “the one and the only King Khan”. He wears a crisp white suit and as his band, heavy on soul-flavoured brass, play behind him, he resembles a Solomon Burke-like figure, only missing the throne.

There’s something unashamedly retro about King Khan and the Shines from the off, clearly still enamoured with with the pop, garage, soul and funk bands of the ’60s and ’70s, they rarely stop sounding like James Brown filtered through the wobbly psych chug of the 13th Floor Elevators. Khan’s voice is hoarse and raspy, occasionally struggling to lift above his incredibly tight and rousing backing band.

However, his white suit-clad crooner approach soon disappears as he nips back stage and changes into a split down the front black leotard with holes in each arse cheek. The fuzzy, ramshackle garage side of the band then begins to come out with this aesthetic transformation, as the Stooges-template of ‘I Wanna Be A Girl’ leads a charmingly pop-heavy segment of the set. 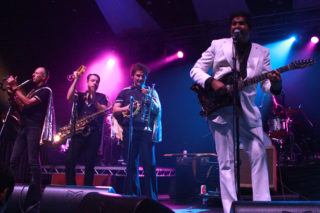 By the penultimate song he has the crowd expelling the noises they make during sex, which he then joins them in in a back and forth until he brings the room to a shuddering climax of groaning, moaning and grinding guitars. As he wraps up the set, the theatrics continue and he imitates ripping the heart out of his guitar player’s chest and holds it in his hand as he lets out manic howls of laughter that resembles Screaming Lord Sutch in its malevolent sense of fun before he stuffs microphones into his trousers as he has two saxophonists player either side of him.

Seedy, charming and fun – King Khan proved a heady escape from the relentless rain on an otherwise grim Sunday afternoon.

King Khan and The Shrines, at End of the Road 2017, Sunday 3 September 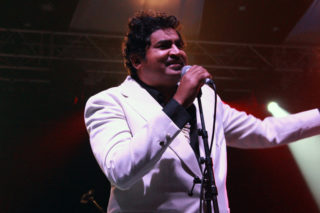