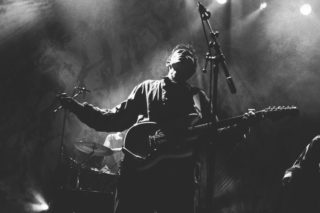 The opening night of a King Krule two-day Koko residency should feel like a big deal, but we’ve been here before. From boyhood acclaim under his former moniker Kid Zoo and birth name Archy Marshall, to his apprehensive treatment of high-profile plaudits and their social media teams, you can’t help but think that the concept of building a cohesive fan base not founded on cult adoration would be met with anything more than a suitably blasé shrug.

This mainstream refusal was the nucleus of October’s 19-track epic, ‘The OOZ’, a virile collection of hard-mouthed anthems on working-class culture, family and mental health met with critical acclaim (mostly). It’s as much of a dub record as it is trip-hop; as much of a punk rock/rap cohesion as it is crammed with intimate jazz balladry. This type of dynamism has become synonymous with King Krule, whose sheer indifference to being typified has given his live shows a capricious reputation of raw impulsivity.

So, when the lights go down and the whispers of old jazz standards fade further away on the PA, there’s a really of nervous energy in the room (a girl spills her drink down my friend’s leg – not the only time drinks go flying this evening). King Krule’s first few abrasive chords of ‘Has This Hit?’ and opening line – “Another disappointed soul” – instantly seem to have some kind of soggy, cosmic relevance.

The versatility of the record is unquestionable – three songs in and the guttural ‘Dum Surfer’ prompts swells in the crowd, with the Future Islands effect uniting metal fans with younger rap and indie audiences. “This next one’s about reptiles,” he says, launching into fan favourite ‘A Lizard State’ from 2013’s ‘6 Feet Beneath The Moon’, which fits seamlessly next to the new tracks. He takes a pause for breath before the grungy guitars are replaced with a grungier brass section, and maybe the first mosh pit that’s ever been done to a sax solo.

Scuttling through an overly indulgent performance of ‘Midnight 01 (Deep Sea Diver)’, Marshall moves to the keys for the two highlights of the evening. First, a free jazz interpretation of ‘Logos’ with his sullen Ian Dury-esque vocals adding poignancy to “The sky will weep on my way home/ The bus won’t let me on, I’ll have to stroll”, before the pounding repetitions of ‘Sublunary’ mock a limp jacket’s crowdsurf towards the fire exit, before it’s lost forever.

Soaring into the final few tracks, crowd favourites ‘Rock Bottom’ and ‘Baby Blue’ sound dangerously close to indie anthems. A sea of iPhones comes out for a smooth breakdown to “is anybody out there?” It’s seemingly rhetorical but people all around start yelling “this is why I’m here, this jazz!” Even the fire alarm attempts to join in, twice. An endearing encore calls for Archy, and it ends emphatically with ‘Out Getting Ribs’. It’s a real statement of a show. Despite its length, the record becomes a whole other beast live; for the first time ‘The OOZ’ seems like a perfectly measured addition to the King’s catalogue. 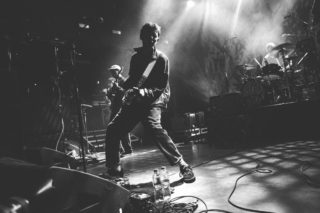 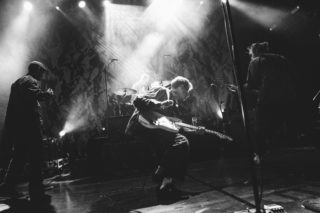