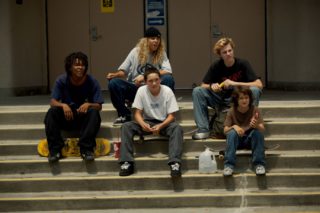 The release of mid90sis as well timed as the film is measured. I write this wearing a pair of Kickers.

Jonah Hill’s choice of footwear back then was different – Etnies or Vans or another shoe appropriate for the skate shop he worked in in Los Angeles. This is the mid ’90s that he recalls in his directorial debut, and while that’s probably not the ’95 that any of us lived through, certain strains of nostalgia, it seems, transcend borders, while a coming of age story as lovingly made as this one remains universal enough to go even further.

So as Stevie (Sunny Suljic) navigates his early teens, we see a boy seduced by skate culture reinventing himself as a smoker with older friends while still sleeping under a Teenage Mutant Ninja Turtlesduvet cover. His T-shirts go from Street Fighter II to Shorty’s; his wall posters are replaced by logos for skate brands like Toy Machine and pages from Big Brother magazine. What’s most measured about mid90sis how this nostalgic visual trail is sparingly laid out, which prevents the film from, at best, overtly winking at the viewer, and, at worse, turning into a theme restaurant of a movie.

Skating is the backdrop – and indeed mid90sis clearly Hill’s love letter to that culture as much as it is youth – but the heart of the movie is adolescent friendship, as Stevie escapes a home life where his older brother beats on him, and finds acceptance within a group of four 17-year-olds with names like Fuck Shit and Fourth Grade. They’re the type of dumbass gang who are constantly hilarious, irresponsible, disrespectful and, as every 17-year-old is, seeded with a very real doubt about what the fuck they’re going to do with their lives. No doubt this is what makes mid90sso relatable, along with the fact that for all their bravado and petty crimes they’re clearly good kids. And there’s the performances themselves, too, all of which feel improvised, which, when you see these guys skate, makes a lot of sense (Hill has surely cast skaters over actors).

Fittingly, the whole thing cruises along, bumming around and not doing much, feeling longer than its 1hr 20min runtime. That how time works when you’re growing up and bored. mid90s captures the grand nothingness perfectly.