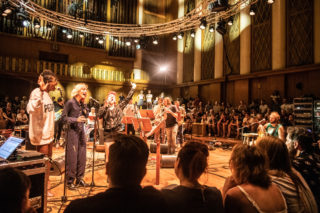 Forget your set times and schedules, here's a piece of paper, Feist is playing next door

At the heart of PEOPLE Festival, an audience of a few hundred has gathered around the Woodlands Stage in a small grassy clearing to watch Damien Rice play “the hits.” There’s a gentle three-part call and response with ‘Volcano’, and an occasional ripple of laughter when participation becomes a little off-tempo and a little more off-tune. Through the trees to Rice’s right, a sort of UFO-cum-futuristic treehouse pokes out of the leafy branches. A small child is crawling excitedly up to it wearing an oversized rainbow-coloured mask, and bumps into the tree with a huge grin.

Opposite the woodlands, the Funkhaus (built originally as a radio broadcasting station in Eastern Berlin) towers as an impressive, monolithic backdrop. Were you to enter the building in the week preceding the Festival, you might have come across almost 200 visual artists, dancers and musicians roaming its corridors mid-rehearsal, weaving through the many different hallway studios in search of the next impromptu collaboration. Leslie Feist has Blu-tacced a sign-up sheet to a wall for anyone wanting to join a choir. Kristin Anna and Nick Zinner (Yeah Yeah Yeahs) have become a blues band. Acclaimed filmmaker Vincent Moon is combing the grounds for an aesthetically pleasing recess in which to later kidnap an unsuspecting festival-goer for a one-on-one performance with their favourite artist. Communal long-table lunches and new friendships in the summertime heat make everything appear a little more like a remedial (adults’) kids’ camp than a gruelling preparation for a Festival that weekend. 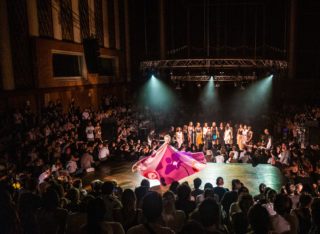 “The hits” don’t come regularly over the two days. PEOPLE is a culture shift; a post-capitalist, post-socialist, manifesto for patience and surprise. It is a non-profit space where artists are invited perform new and untested material, to edit and rework away from assessment. Established by The National’s Aaron and Bryce Dessner, Bon Iver’s Justin Vernon and their close friends, hoteliers Tom and Nadine Michelberger, participants are listed more often than not by their birth name rather than their band name. There’s no commercial expectation and no grand narrative that a performance should adhere to. For the audience, there’s no schedule or public line-up, just slips of paper that you’re handed, directing you into different rooms with no way of knowing what you’re about to experience. It’s not a place you go to see your favourite band as you know them, but an environment that lets you connect with an artist in a particular moment, wide-eyed and unplugged as the happening begins.

A boat has brought many people here, departing from just outside the Michelberger Hotel. In an apposite nautical beginning, Kings of Convenience’s Erlend Øye places himself (and his ukulele) on the top-deck’s one empty seat, conducting a cheerful sing-a-long as the boat chugs down the river; Melissa Laveaux turns into a one-woman marching band with a joyful Afro-Caribbean folk rendition of ‘Tolalito’; Henning May growls an acapela construal of an old Rilke poem. On site, a limited vinyl pressing of the PEOPLE Mixtape (a handful of collaborations from the weekend’s artists) is being sold at the merchandise table. It opens with lolloping six-minute instrumental ode to the Spree by Aaron and Bryce Dessner and electronic experimentalists Mouse on Mars. Even if the heat were to melt the wax, you’d think it would still sound like a curious and apt illustration of a festival that could only exist within these surroundings. 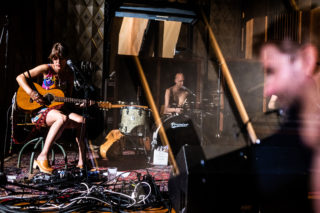 The jewel of the Funkhaus is Saal 1, a concert hall and recording studio that’s been built in concentric cherry wood circles with the performance space in the middle. A 54-piece organ climbs the walls of one half of the room. Shortly after its conception it was knocked down and rebuilt to take 0.6 seconds off the reverb. Andre de Ridder’s Stargaze orchestra opens with Deerhoof’s Greg Saunier, reimagining Beethoven and Fugazi. Saunier’s tattered rainbow straw hat and tasselled flares mark him as an eccentric, but there’s something mesmerising about watching a professional percussionist drop marbles on a Birchwood snare drum and scrape a credit card around a cymbal for 20 minutes. With curiosity as the bedrock, an intimate hallway session sees Irish hip-hop convince a 50-year-old man to “do the helicopter” with his T-shirt; a Finnish man then learns Italian in front of a live audience for seemingly no purpose. In Saal 6, Beth Meyer collaborates with Jason Treuting by breathing sharply in and out.

Where experimental interludes were received with eagerness and intrigue, the highlights across the two-days were special and raw moments. No musician is awarded the complacency of knowing how 95% of their material will be received – this isn’t a weekend of Justin Vernon playing ‘For Emma’ – you’d be lucky to hear a B-side. Bon Iver’s trumpeter, CJ Camerieri, airs a raucous set of electronic-brass demos with Ryan Olson, Ben Lanz and Kyle Resnick to a standing ovation. They say it’s for an album that’s coming soon with Sufjan Stevens. Resnick later plays an immense drone set in Monom, a spatial sound studio that blankets you entirely in noise. Above them in Alex Somers’s ‘Siblings Installation’, Gordi and Buck Meek initiate an ambient folk set with 36 amps.

When the studio sessions have finished, Big Red Machine play a thunderous European debut. It’s the one project that’s taken the PEOPLE platform to elevate a traditional album roll-out. Justin Vernon and Aaron Dessner don’t let that interrupt the festival’s ethos though, bringing out Lisa Hannigan, The Staves, Kate Stables and more for a full band reformation. It’s as close to a headline set as the weekend sees. Earlier, you could catch the collaborators joking about, practicing the lyrics to ‘Gratitude’ – “well we better not fuck this up.” 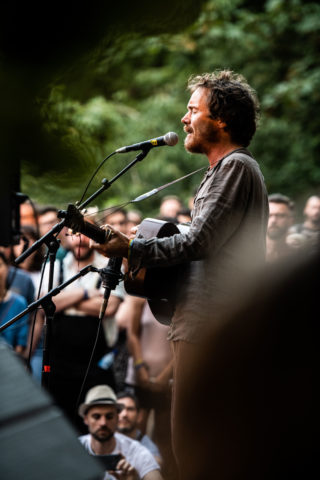 As friends paid tribute to friends lost, the apex of the weekend was the final piece by the Women’s Choir. My Brightest Diamond’s Shara Nova began a chant that she had written for Jess Dessner, who has recently overcome a lengthy battle with breast cancer. The audience cleared a space as Jess came out to join, opposite the choir, enveloped in a costume designed to represent her tumour. A hypnotic dance routine shed her outfit to reveal a golden show-dress. All the while, she stared at the choir who stared intently back, calling for ‘Saint Agatha’ – the patron saint of breast cancer – to protect her. The choir’s vigour and intensity revels with “keep the faith”-era fists in the air. It felt like each of the weekend’s artists not performing at that moment had crowded into the studio too, smiling and sobbing in tandem.

These moments of empowerment, support and community made PEOPLE an incredible realisation. Decades of musical archiving looks at shows and festivals from the good old days and calls them out as moments that great artists became great. Hendrix at Woodstock, Nirvana on MTV Unplugged, Leonard Cohen at the Isle of Wight Festival, Bob Dylan taking a turn for the electric. Here, you can only imagine how many artists had their great moments in the last 48 hours. There’s a lot more to say, but maybe hunt me out and talk to me in person about it – I feel like that’s the point.

There were elements of PEOPLE that made it a Festival, sure: there’s still a queue for the bar; there’s still a techie with a topknot who needs to pull his shorts up; there’s still someone standing alone flossing (I think it’s one of the Rusangano Family). But these aren’t the things you notice. One artist says “I’ve been singing in isolation for 20 years and now there’s this.” It’s an addictive community with an audience that will listen to anything, without waiting for the chorus. This weekend, PEOPLE has rewritten the process behind making, releasing and interacting with music, and for the most part it feels important. It’s not the £200 stadium tour or the pyrotechnic finale but a full physic reset – it’ll do just fine.