It's free, so kinda rude if you don't go and pick up a copy

Shame are a young, aggressive, opinionated punk band, which means, they say, that “a lot of people think we’re arseholes.” They really aren’t, and since we first featured the band in June 2016 we’ve watched the south London school friends play and play and play, and become a live band incapable of phoning in a tired performance – kinda like Fucked Up when they started out. 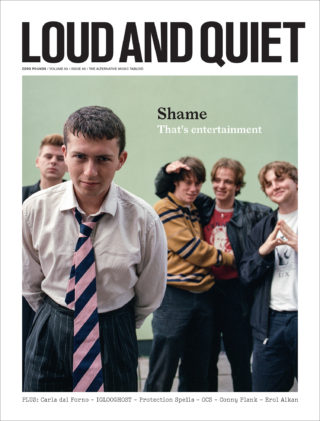 For this month’s cover feature, ahead of the band’s debut album in the new year, photographer Dan Kendall joined Shame for a couple of dates of their UK tour, and Daniel Dylan Wray met them at the Liverpool show to discuss their desire to entertain while representing all of us… And the fact that they’re not arseholes. Seriously.

If anyone tours (or works) harder than Shame it’s John Dwyer and his OCS/Oh Sees project. Dwyer doesn’t give many interviews, but this month he’ll release his 20th album with OCS and celebrate 20 years of the band. He looks back at his unprecedented DIY career so far with Dominic Haley.

We also celebrate an accidental anniversary with Erol Alkan, who closed his Trash club night 10 years ago and happens to have a comp coming out this month of his remixes. With Reef Younis, he runs through ‘Erol Alkan Reworks Volume 1’, a track at a time, as we try to work out how he’s kept kids dancing for so long.

Brand new artists we meet for the first time include IGLOOGHOST (for a text conversation about creating a world of jelly worms in witch hats), Carla dal Forno and Protection Spells. And Dan (DW) also retells the story of legendary krautrock producer Conny Plank – a man who turned away Bowie for being to fucked on drugs, and Bono for being Bono – with the help of his son Stephan.

Kele Okereke remembers being 16 and being in love with Suede, Stefflon Don completes our Getting To Know You questionnaire, and there’s all the album and live reviews, of course.

Order a copy here to contribute to your favourite music magazine (us).