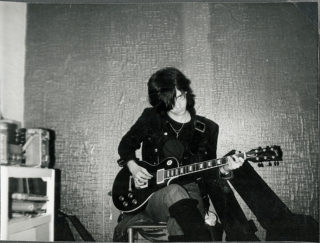 I turned 16 in October of 1979. I was bouncing between my parents’ house some of the time and Andy Rourke’s house most of the time. I’d go home now and then and often end up having a bit of a scrap with my mum and dad, because I’d been working on being a bit of a tear-away for a couple of years, which was all intrinsically tied up in trying to be a musician – I’d left school a year early and was making money through working in a proto-goth clothes shop in the bottom the Arndale Centre called The Cave, which played great music.

I played in my mate’s band and was trying to get my own band together. We used to rehearse in a big, old mill in the centre of Manchester called T J Davidson’s Rehearsal Rooms – it was a completely horrible, cold space with asbestos everywhere, and you’d have to burn wood in the corner of the room to keep warm in the winter. Joy Division rehearsed there upstairs – the footage you see of them playing ‘Love Will Tear Us Apart’, that’s T J Davidson’s.

I wouldn’t say they looked aggressive, but they were an arresting vision. You’d see them pushing their amps down the hall and they’d be dressed in old men’s clothes. Now, that’s no big deal, but in 1979 it was seriously freaky. Wearing a safety pin through your ear was nothing compared to wearing an old, grey, button-up shirt, old men’s trousers and a really austere haircut. It was radical.

At 16, I also got a job on a TV show, called Devil’s Advocate. I was working in the shop one day and this woman with a clipboard came in. She eyed me up and down and she said, “Would you be interested in being on a television show about unemployment?” I said, “Well, you’re in my place of employment, how does that work?” And she actually said, “Well, we’ve got a skinhead, and we’ve got a goth, and we’ve got a rudeboy, and… what are you?” I think I probably said that I was a rocker. It was £30 a week, on Sundays, and I thought, ‘well, I don’t have much on on Sundays.’ My manager at the shop was a real tool (he ripped everyone off – he ripped the customers off, he ripped the employees off) so I told him that I’d been asked to go on this TV show and he said if I did it he’d give me a new shirt to wear, if I could find a way to mention the shop. I knew I had him on the hook then, so I said, “nah, I’m not going to do it.” I put it to him that if he gave me a new suit I’d do it, and then I knew I really had him on the hook, so I said that wanted a new suit every week. Of course, I chose the most expensive suit in the shop each week – I would have done the show just for the Johnson’s suits, to be honest, which was this legendary shop on the King’s Road in London.

I’d go on the show and try to give as little opinion as possible – partly because I was paranoid that someone might recognise me from the shop when I’m supposed to be unemployed, and also because I was always really stoned, and I couldn’t handle that under the studio lights.

This boss of mine – who, as I say, was a tool – was blacklisted from suppliers in London because he owed a lot of people money. So he sent me and Ange [Johnny’s then girlfriend and now wife] down to buy the best clothes from the Kings Road so that he could then copy the styles. The thing was, we liked the people we were meant to be spying on more than we liked him, so what we’d do is we’d be completely open about it and tell the stores what we’d been sent to do, and they’d be completely complicit in then filling our bin bags with all this crap that they couldn’t sell. They’d then give us two bags of the stuff that we really wanted. We’d catch the train back to Manchester, throw our two bags in this bush and have to endure this procession of him pulling out these terrible camo trousers and leopard print kimonos and going, “Are these hip? Will kids like these” and we’d go, “Oh man, you’re gonna flog tons of those.” We saw it as fashion karma.

I’ve always said that the most important thing that’s ever been in my life is Ange. I really wasn’t over exaggerating that in the book – if anything I was playing it down. I always say she made me brave. We started going out when I was 15 and she was 14, and it felt incredible to know that I’d already met the person that I was going to spend the rest of my life with – my hormones didn’t have to worry about that like other teenage boys. We were inseparable. It was really sweet. I remember that one night when I’d had a scrap with my parents and I had to sleep outside, Ange stayed with me. We slept in a bin shed on a ’70s council estate, freezing cold. It was partly really romantic and partly really tragic. If it wasn’t a Smiths song it was a Suede song.