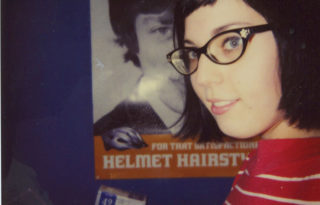 Meg Remy always knew that 16 was not her time. She spent it running down the school clock, lecturing her classmates on STDs and stepping out to punk shows in the city.

In 2001 I was outside of Chicago, living with my mum. I was going to a private Catholic high school, where I had no friends. Well, one. There was only one other punk person.

The town wasn’t too small, but small-minded enough, you could say. What was small was my school, and you had either the uber-rich kids or you had the kids whose parents didn’t want them going to the public school so they were working their asses off. My parents were middle class. They weren’t religious, but my mum didn’t want me in the public school. But I was living my life mostly in my head and outside of school anyway.

At school you had prayer everyday, and you had mass once a week. It was religious. Like, the science class was: ‘we’re going to teach you evolution because we have to, buuuut really the truth is that God made everything in seven days.’ That was at a period of time when I was getting very into the truth. I was obsessed with truth – the truth about America, about politics, about my family, the truth about science, the truth about women, the truth about everything. So I was constantly running into brick walls in that school, because I couldn’t accept the things that they were saying, and that there was no wriggle room for other perspectives. It was frustrating, and yet I knew that high school wasn’t going to be my time. I just had to get through it, and it was going to be ok.

I was always in trouble for running my mouth off. But I had one teacher who was really good with me and I asked him if he would let me speak in front of the class about different topics. He let me talk about anything I wanted, pretty much.

During that time period I’d made my first connection with the transgender world, and all this stuff about gender – I made a friend, Katie, who was transitioning, and that wasn’t common back then. When my mum found out that she was trans, a bomb exploded in our house. But the struggle of gender and people wanting to change genders, I related to it somehow. So I spoke a lot about transgender issues in front of my class. It was very bizarre, really, but it was pretty amazing that my teacher let me do that. I can only remember him stopping me once, when I was giving a talk on STDs and I was like: “if you don’t use a condom, it’s fine,” and he was like: “whoa, whoa, whoa, whoa.”

All these things that I was reading about and learning about, I was so compelled and moved by them that I wanted to share this stuff. I wanted people to get riled up as well, but they weren’t – they were just picking their nails. It’s funny when I look back on it. I don’t know what I was thinking.

Class time wasn’t when I had problems with other students; it was more in between, in the halls and in the lockerooms and at lunch, when the real meanness comes out. They weren’t picking on me because I didn’t believe in God; they were picking on me because I had short hair and they just wanted to call me a dyke. It wasn’t really a hard time for me, though, looking back on it. School was like working a job – I was watching the clock, the bell would ring, and I’d be free.

I went to the city [Chicago] a lot for shows. On school nights. Just any show. There was a venue called The Fireside Bowl that was an all-ages venue that used to be a bowling alley but now did punk shows. I’d go see anyone there and punk bands changed my perspective a lot that year. I saw Wolf Eyes that year; Glass Candy; The Gossip; Caroliner; Lightning Bolt.

I had my one friend that I went to school with. He was the only other punk, weird kid, and we’d go to these shows together, but I had a whole new set of friends that I made from the city, who were older. I mean, I lived a huge part of my high school years pretending to be a completely different person in the city. I didn’t give anyone any information on myself, and would just meet them at shows to hang out. It came out who I really was and how old I was once I dated someone, but I needed another world to survive what my reality was. It was a great comfort to leave school and put on a CD that I loved in the car and play it really fucking loud while I drove out of the parking lot. Corny shit like that, but it was good. And experiencing these older friends in the city and how they lived taught me that you don’t have to work five days a week – you can choose to not play that game.