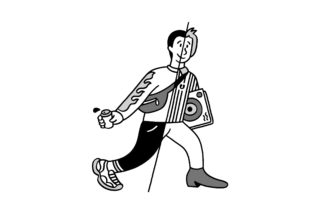 Not everything happens everywhere at the same time

Small towns, particularly in the North West, are so full of mods. Lads bowling along high streets with those fucking ridiculous box fringes and whips, squeezed into skinny jeans and Fred Perry polos that they’re two sizes too big and ten years too old to be wearing. It’s curious to see such a specific aesthetic, once the domain of a progressive subculture, then the beery uniform of the masses, now a bizarrely ubiquitous throwback, so resolutely hanging on to a certain type of provincial young (and not so young) man.

As I write, I’ve just been back to my home town for Christmas. It’s a healthily bracing experience these days for me, wanky leftie culture snob London boy, to get back here for a good stint, and remind myself that I share just as much with the Gallagher brigade of my adolescence as my ostensibly worldlier city mates. I’m from Macclesfield, a town of 60,000 people fifteen miles or so south of Manchester, a place that feels very much in the shadow of that city, yet often much further away than the twenty-minute journey. It’s probably best known as the home of Ian Curtis, but even as a music-obsessed teenager, that wasn’t something of which I was made particularly aware when I lived here, at least not until the year or two immediately before I left. It was the people I knew from outside the town, from exotic places like Stockport and Poynton, who would talk to me about “my” Joy Division/New Order connection. Nobody I went to school or college with seemed particularly bothered, seemingly more interested in The Jam, Oasis, or the handful of eye-wateringly shite blues-rock bands that the town churned out for a few years in the late ‘00s.

As I got a little older and more into Joy Division et al, this disinterest became more apparent. An example: once, while working a summer job as a labourer, I laid some concrete on Stephen and Gillian Morris’ drive at their house on the edge of town, doubtless so Stephen could race his collection of tanks and armoured cars up and down his plot of land in the Peak District foothills to his heart’s content. The builder who was running the job seemed genuinely surprised that a young lad like myself was keen to meet Morris and glimpse inside his home studio once the work was done.

It occurred to me recently that the reason for this apparent disconnect between my home town and one of its few scraps of cultural heritage may well have its roots in the hegemony of one version of the punk/post-punk story. All those documentaries and books that virtually begin and end with “…and then a little thing called punk happened” have completely dominated the popular understanding of that period of British music history, but the more I think about it, the flimsier this narrative seems. I’m not the first to make this point, but it bears repeating: punk didn’t “happen” everywhere at once, nor to an immediately and unanimously appreciative audience, and neither did any of the resulting innovations about which the golden agers of half-arsed music journalism get so misty-eyed. This earth-shattering cultural singularity didn’t just arrive perfectly formed, slotting itself neatly into another unasked-for book by Peter fucking Hook.

It simply wouldn’t have been possible: subcultures don’t move with such speed or consistency through entire countries. For example, we didn’t “get” dubstep in Macclesfield until Skrillex and his EDM trolls dragged their bastardised version of it into the mainstream in about 2010, a good six or seven years after its more refined ancestors first took hold in London and Leeds. Pre-internet and with far fewer mass media outlets, this distribution will have been even more sluggish and uneven, even in the case of more commonly-lauded cultural moments like punk rock or Joy Division. Many people in Macclesfield might not remember that mythical explosion that followed the release of “Transmission”, because, well, it didn’t really happen like that.

Perhaps this is why it can be such an oddly pleasant experience to come back to the indie discos, heroically manky toilets, Wetherspoons pitchers and Lynx Africa that characterised this Christmas’ hometown nightlife as reliably as ever. As critical and nostalgia-resistant as I think it’s important to be, there’s something refreshing about leaving the blink-and-you’ll-miss it trend carousel of London behind and reconnecting with the weirdly timeless indie-lad aesthetic of places like my dear Macc. Cultural progress here is more gradual, yet this is not necessarily a bad thing – simply the result of people getting on with life, only indulging their cultural interests when they have time. It’s easy to forget that most people don’t take all the nonsense that I love as seriously as I do, and nor should they.

I’m aware that some of that last paragraph sounds patronising, but it’s meant sincerely. There are many problems with provincial attitudes, but there’s something valuable about a genuine and prolonged investment in a particular set of cultural touchstones. What’s more, those attitudes aren’t going anywhere; in polarised times, it might be useful to recognise their merits as well as their flaws.

Mods do look shit though.