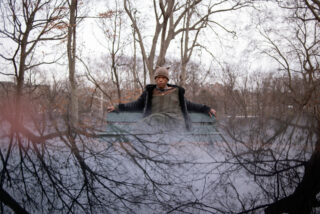 Picture a forest as the sun comes up. Trees with yellow-green leaves form a canopy. The air is thick, lush and damp after the rain. Rays pour through the trees’ leaves, dripping luminous pools of light across the forest floor. You look again. What seemed to be roots and vines are in fact, tangled masses of wires that have taken over, criss-crossing the ground and up the trees like weeds. Growing out of the wires are screens flashing neon forest colours, on and off, flickering in the branches. The light from the wires merges with the sunlight, so you can’t tell what’s nature and what’s man-made.

This is the image that experimental R&B artist :3LON (pronounced ‘Elon’ and using they/them pronouns) envisioned as they worked on their upcoming EP, due for release on their start-up label, PLUR.net, later this year. In ‘Quantum Leaping’, the first video from the project, dropped in January, :3LON appears bioluminescent, shimmering like the wings of a bird, or the scales of a tropical fish. Rather than work with a narrative arc, :3LON concentrated in this video on transmitting the mood underlying the song, connected to the wider concept of a sci-fi/nature mashup that had developed during the writing. It sounds, as we chat, like :3LON’s imaginary forest is something from the speculative stories of the eco-critic Donna Harraway – almost real, the promise of a better thing from the mess of now.

“I’m super interested in those moments in history when things have been forced to evolve,” :3LON says – the moments, they expand, when fish crawled out of the sea and started to walk. What we’re living through now could be, rather than total environmental collapse, another moment in the history of evolution. It’s a conversation that makes me desperate to hear the full EP, though it’s not quite ready yet. 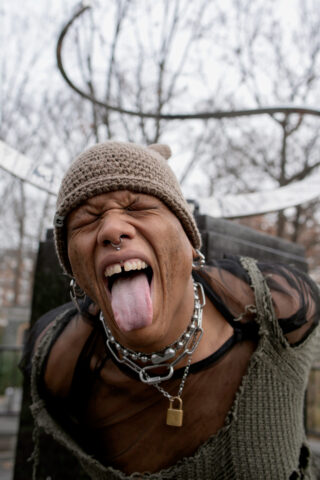 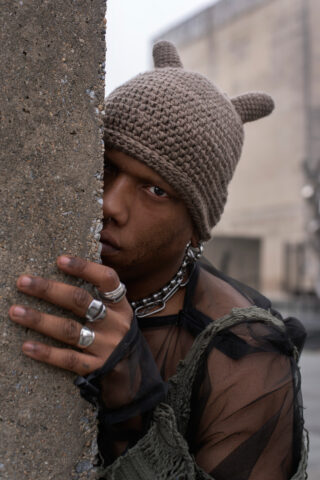 This project, :3LON explains, is the culmination of a years’-long process that began as an attempt to capture the high-octane drag race aesthetic of the video game Midnight Club. Over the years the writing has shifted into something softer and more emergent. As they listened to video game music, the breakbeats and “crazy techno” gave way to something else, “I just thought, I want to bring this energy, but also remain soulful and talk about something that’s sincere, like a sincere idea. I’d just put together a collage of ideas and mash them together and hope it was something I could do.”

“I was really going with that first idea – the video game – for a second,” they tell me, “but then I started realising that the songs I was writing were songs about robots. Like, how does it feel to be an artificial intelligence trying to be able to love a human? Or the idea of, ‘I jump to this dimension to find you?’ It’s actually more like a sci-fi kind of thing, more than just your average video game car driving scene. I started stepping back and seeing, just kind of seeing the full picture, with a bit of distance. And realising it was something different. I stepped back and just listened to what I was doing, and let it become its own concept. It became this futuristic world that I started building. I started thinking about these concepts, about this world that these songs could have a context in, and I was like ‘Ok well, it would probably be like a futuristic world that is still controlled by someone who is, you know, not in the best interests of everyone.’ So you know, what would that mean for us? And then I’d write more songs. It’s kind of just really naturally evolved into this thing. But at first I definitely wanted it to be this video game kind of sequence.”

Producing their own work was a chance for :3LON to develop a practice without the pressures of an indifferent and greedy industry. Everybody knows that signing with a major label is as much a risk as an opportunity – stories of musicians whose work is shelved pending release are rife.

“I was shopping my music around people and I really… it kind of got to the point where I wasn’t really releasing any music because I was shopping it around, waiting to see if anyone deemed it worthy of release or whatever. It basically got the point where I was like, ‘I don’t care.’ I honestly don’t care. I think that’s always a hindrance for artists, people always be like, ‘You have to be signed by a major deal or label or something to make art, or to make anything good’. And that’s not the case. You actually don’t need anybody. A lot of the artists I look up are people who started their own label…people doing their own thing.”

As a teenager, :3LON listened to J*Davey – who signed to Warner Brothers through Prince’s imprint and were swiftly dropped. “And then they started their own imprint, and they started dropping all these crazy projects and I just got obsessed with them growing up. And also Robyn, she has her own label, Konichiwa Records. I love Robyn so much. I love Robyn. People like that, the cool, artistic underground people, they just release what they want. We can just release a bunch of weird content and… you know, just go to all these different places without someone telling me this is marketable, this isn’t marketable.” And even if you do secure a major release, the more people there are involved in a project, the less say an artist has over their own work. 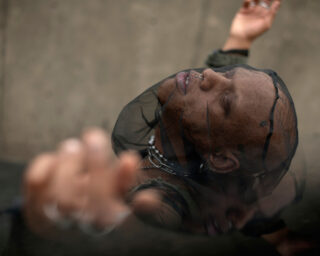 That lack of control is something :3LON experienced during the release of an earlier EP, which they’d put out with friend and fellow musician Schwarz. On that project they’d felt creatively compromised by the input of producers and the pressure to rush releases, “I kind of put it out way before I was ready to do it because I just had all these other people telling me like, my deadline and like… just being like ‘No it’s good, let’s just do it.’ But it wasn’t really up to how I would have liked it. It’s just one of those things and erm, yeah. I just didn’t have as much control over the songs I was writing…”

We return to this theme of control a few times through the interview – and as we speak it starts to become clear why :3LON is more optimistic about the possibilities of technology for human futures than might be warranted by current scientific consensus. Speaking about their emergence through the music scene of Baltimore, the role of the internet in offering a platform for a whole ecology to flourish out of an advanced capitalist inequity becomes clear. “We just have so much talent here. It’s always been a place where people overlook us a little bit, no one knows what’s going on here and suddenly there’s all these artists coming out and people are like what? It’s been this way since I was a little kid. Always amazing DJs, artists, rappers. There’s hella creative energy here. And there’s a lot of raw talent – you know that raw energy, like it’s just this energy that’s distinctive to this whole country. I’ve travelled a lot of places and I’ve never encountered the kind of energy that we had here, in both good and bad ways.”

The Baltimore music scene, :3LON expands, just wouldn’t exist without the possibilities the internet offers to claw your way out of parochial obscurity. It’s virtual channel for all that raw energy.

“The internet changed so much. All that gatekeeping stuff. It doesn’t work anymore, I mean you can go down that route, but it’s hard for people to gatekeep if you out here pushing your stuff and hustling. You can just make a name for yourself. I think people have a lot of online cool presence in Baltimore now that’s allowing them to make a name for themselves, to radiate beyond the city, get other people’s attention. There’s not a lot of history here so you can do a million shows and not move on with your career. But everyone I know who’s popping off it’s been the internet, we’ve been really utilizing it.”

“The baseline in Baltimore is a lot of people have this scrappiness that is kind of inherent. I remember being a little child and they was teaching it to you – like you don’t ever back down. Don’t ever back down. And sometimes it can be problematic, but sometimes it can really focus you, like if you can learn to reprogramme that energy into something more productive then you can really just be a force. So, I feel like a lotta people here we don’t take no shit, and people love that.”

It’s that raw Baltimore energy, its own kind of bioluminescence, shimmering across the internet, giving audiences scenes they never knew they needed. And there’s :3LON, like the screens growing from wire weeds of that imaginary forest, entangled and flickering in a brave new world.