You may recall May 2021: lockdowns were lifting, foreign travel was opening up and what remained of the entertainment industry was beginning to clamber back to its feet. For most people it was a period coloured by nervousness, frustration, hope and relief, a time to venture back out into the world at last. 404 Guild, on the other hand, were planning to enter a brand new voluntary lockdown all of their own.

The South London-based experimental hip-hop quartet had, like so many other musicians, used the break in the world’s usual order as a chance to hunker down and get creative. They knew they were working on their debut album, after nearly a decade of establishing themselves as one of the darlings of the UK underground, and the whiteboard in their Wandsworth studio was swimming with fifty-odd song titles in various stages of development. But for whatever reason, the pieces were not falling into place.

“We all had bits that we liked, but there just wasn’t an album there,” says Elliot, one of the band’s producers. “There was no through-thread running through everything, it wasn’t cohesive. It was just a load of stuff.”

The whiteboard represented the results of 18 months of creativity, but the band’s dissatisfaction forced their hand into trying something radical. They booked themselves a cottage deep in the leafy West Sussex countryside and decamped there for an unbroken two-week period, with the stated aim to conceive, write and record an entire album’s worth of new material.

“We locked ourselves away into this little place and solely dedicated our time to writing this project,” explains vocalist Devenny. “We’d literally wake up, break bread and then make music all day, go for a walk, sleep, rinse and repeat. I think the intensity of that made the project quite clear for us.”

It was a headlong dive, a sizeable gamble, with no antecedent in their career to date. The four, friends since meeting as teenagers in Bournemouth, began the process by sharing conceptual ideas for the story they wanted to tell before agreeing to take yet another maverick decision and record the album’s tracks in chronological, setlist order.

“We made them one track a day, and that’s how they appear on the album,” says Bathwater.

“There was a fury to the writing, which was really exciting,” continues Elliot. “It did feel like a 14-day fever dream. It was very weird, we were in the middle of nowhere, there was nowhere to go. There was one shop that shut at four, there was one pub, but it was half an hour away. The weather was really weird the whole time, it was either sunshine or storms. It was cabin fever in full effect.”

The results are there for all to hear, the strange intensity of its setting borne out across False Dawn’s twelve richly atmospheric, hauntingly contemplative tracks. The refinement of their focus and the purity of their vision makes for a stunningly cohesive and complete record, an album that plays out like one unbroken thought. Rarely does a debut album hold together this well.

“It was a fascinating process, we found it to be a winning formula for us,” says Sonny. “All of us were 110% engaged.”

“It’s really cathartic to put something out like this, because I think it’s the best representation of us as a whole project so far,” agrees Devenny. “It’s a really good introduction into our world and all of our influences and what we’ve been listening to since we’ve known each other.”

From the eerie, creeping, mildly paranoid aura that envelops opener ‘At Square One’ to the agitated, popping anxiety of ‘Feedback Loop’, the record neatly builds upon the groundwork that the group laid on their trilogy of early EPs, released between 2019 and 2021. Low-voiced, lyrically dexterous raps serve as the humming engine driving the tracks inexorably toward their end point, a place somewhere in the neighbourhood of Young Fathers and Clipping.

In addition to their early releases, their reputation was established by their hard-gigging schedule on the London circuit, where their vibrant shows soon began to catch the attention of their contemporaries. One early adopter was Theo Ellis, bassist for Wolf Alice, who made a recommendation to his band’s label Dirty Hit, who liked everything they heard and swiftly signed the group. 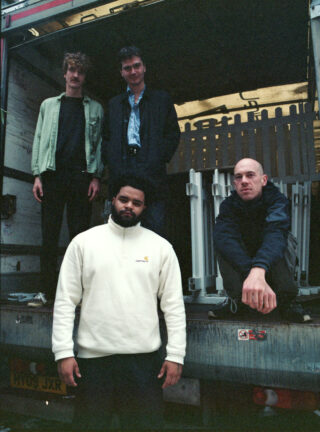 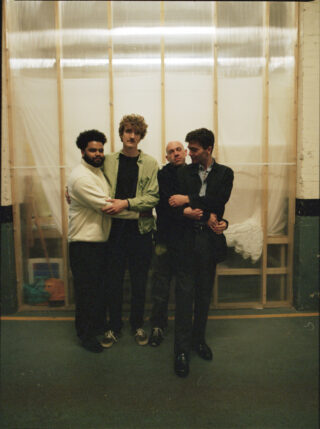 The drastic move to discard the whiteboard songs (they say many of these are still likely to see a release one day) and start with a blank new page also opened up the possibility for a sharp sonic left turn, something that they were very relaxed about.

“If we’d have sat down and found that we were only making dance music, then that’s what it would have to be,” says Devenny. “The story was going to come and whatever sound it took, so be it. The catharsis of the completion of the project was the main thing for us; how it ended up sounding was irrelevant in some ways.”

In the final event, the music they made followed their earlier work relatively closely, at least on an aesthetic level. “This project is arguably our most mellow,” Devenny continues. “A lot of elements in it are very tame, and I think that was partly on purpose because it is somewhat easy to make people nod their head or move or feel something when it is aggressive, and they don’t have time to think. But when you do have time to think, when you slow it all down and get people to really listen, if you can make people move that way, that is even more powerful.”

Where in the past, members of the group have paired off to collaborate on projects, the cottage environment allowed all four corners of 404 Guild to work in close tandem this time around. “Building up to this, all the different factions of 404 were tributaries, and now we’ve got this river that’s got all of the sounds and all of the areas that make up our universe,” says Bathwater.

“Having made those other projects, we’ve already discovered a lot of sounds and atmospheres we can make together, so I think we just naturally moved through a lot of them in the album. There are micro-relationships between us musically, you hear things emerging and you trust that one of the other guys will pick it up and take it to an interesting new place. The album is about the journey of our friendship.”

The necessary limitations of the cottage – to which they only brought a very limited range of instruments and software – inevitably contributed to the end product, too, as did the place itself. Frequently, tracks are built on a bed of misty, chilly ambient sounds that could pass as extracts from the score of a Ben Wheatley-style cabin in the woods film. “It definitely lent itself to a folk horror set, where we were at,” says Sonny.

“Our stuff has always had this slightly haunted, pastoral, countryside landscape – spooky small towns and fields in the middle of nowhere,” adds Bathwater. “We went to exactly that place, so it is all pretty full circle.”

Once the record had been completed, the band could more easily reflect on the fruits of their labour, ultimately describing it as “a flag stuck in the ground at the end of a long dark road”. One could understand that difficult journey as having begun in May 2019, when their friend and bandmate Mina took her own life. It was a total shock for the group.

“I think perseverance and love are the key things,” says Devenny. “For us, we all dealt with her passing in different ways. For me personally, I wanted us to stay together to make sure that this record came out, just to honour her. That’s a voice that needs to be heard, and it will be heard. I don’t think you ever really get over that, and I don’t think we ever will, but on a musical level, it’s that thing about immortalising someone’s voice and preserving how beautiful her talent was. This album is ultimately dedicated to her.”

There were discussions about whether 404 Guild could carry on in the aftermath of her passing, but it is now fully agreed that they made the correct decision. With False Dawn now delivering on their potential in spades, the group’s focus has never been clearer.

“There would have been no shame in deciding to stop,” says Sonny. “But we’ve weathered so many storms, and I think this album is like climbing that mountain and shoving the fucking flag down and saying, ‘Thank God we got here’. And then realising that there is more in the tank. If we were able to do that, surely we’re able to do so much more. That’s the triumphant thing about this project. It’s not flag down, we’re finished. It’s flag down, there’s more to do.”