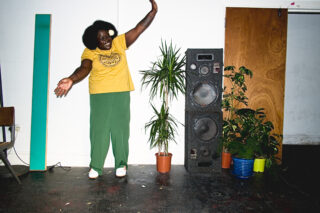 Just three years ago, Donna Thompson thought she would never get to release her own music. The South London singer and multi-instrumentalist had spent a number of years leading the R&B/indie outfit Lightboxes, but by 2016, it had become apparent that she needed to get out.

“I guess there was a situation with some people that scared me away from wanting to do music,” she says now on reflection. “Lightboxes was really fun – it was my baby and a lot of people got excited about the potential of things, but some of those people weren’t really willing to do the work. Crazy things happened, I just had to stop. The way I was made to feel was that I would never have any kind of success with music.”

Thompson is understandably wary about exploring the episode in more specific detail, but she does admit that the period following the end of the group, which consisted of more than two years where the music obsessive found herself with no creative outlet other than music teaching, was a major psychological roadblock.

“I’m still dealing with it, in a way,” she says. “It was a very hard time, I struggled a lot with my mental health. It just felt like the one thing I could do had been taken away from me.”

It was a chance meeting with Stephen Bass, the director of Moshi Moshi Recordings and owner of PRAH Studios in Margate, that eventually brought Thompson back into the active fray. Bass saw one of Thompson’s first outings back on stage after the hiatus, performing as part of jazz artist Alabaster DePlume’s live band, and approached her with an offer to provide the conditions for an EP of original material. The results more than justify Bass’ instinctive confidence in Thompson’s abilities: the four-track Something True EP, released in July on PRAH Recordings, is an astonishingly confident, texturally rich first statement, ordained with Thompson’s elegant, smooth vocals and a loose, sashaying classic soul polish.

From the moment Thompson set foot into PRAH’s Margate studio, she knew that the trauma of her previous experience no longer had a hold over her. “Before that, I felt like I didn’t really know enough about the industry to know where to turn to,” she explains. “And I’m still trying to learn that. But I feel like with PRAH, they are very understanding and they just want me to do good music, and there’s no angry, horrible pressure. Everyone is just really nice.” 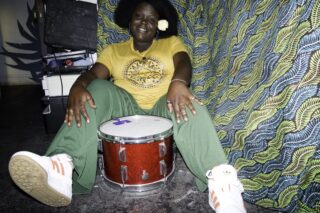 Thompson is so effusively positive when she talks about music that it is impossible to imagine she ever could have left the industry permanently. Born in Enfield to a church minister father with a penchant for the bass and a singing mother, music positively oozes through her being. She speaks enthusiastically about a childhood immersed in her parents’ gospel and Motown records and being infatuated with lovers rock. She found an early affinity for the drums and still considers it her home instrument, but for both her and her two sisters, all music was made to feel within their reach.

Even in a household brimming with positive influences, there comes an age where the teenage instinct for rebellion takes hold, and for Thompson, like so many others, grunge provided that outlet, although the diversion was relatively short-lived. By the time she was packing her bags to head to the south of the city to study Popular Music at Goldsmiths in 2007, she had drifted back to the R&B heartland. University life, she found out, was the thing for her, rejoicing in the camaraderie of “creatives and arty people and musicians.”

“Going to Goldsmiths made me focus on being an artist, which I hadn’t really thought about before,” she says. “I was just singing in little bars and stuff, I just liked doing that. But suddenly when I was at uni, it was like, ‘Oh, I could do this!’”

Inspired by her teaching to probe more deeply into the social and political context of contemporary music, Thompson found that her own writing and creativity began to accelerate. She started to play regularly with the renowned Exeter beatboxer Bellatrix, which in turn led to her establishing a friendship with DePlume, and subsequently the current relationship with PRAH.

It is on ‘Matchstick’, a standout track on Something True, that DePlume’s prowling, bewitching sax lines match Thompson’s patient, quietly powerful vocals, blending into some alchemical new vision of a smoky jazz club scene, albeit driven by a razor-sharp, DJ Shadow-like drum pattern. ‘Come Home’, meanwhile, is a more densely-woven piece, with Thompson’s multi-layered, delicately-handled vocals offering a startlingly intimate, personal touch. Thompson makes a point of recording her vocal takes in her own bedroom to preserve that sense of the personal: “I just want people to feel at ease and calm, and in order to do that you have to really feel that and capture that moment, and that just seemed to happen when I was at home alone”, she explains. When Stephen Bass asked her to just head into a studio and do her own thing, he could hardly have expected Thompson to be almost fully-formed from the get-go.

“I didn’t force anything to come out, it just came and I just layered it and layered it until it was done,” she says with disarming sincerity. “I was just thinking, how can I make something that I like and that involves my friends and the people that have been there for me in the past couple of years. I guess it was quite easy. I’m a person who doesn’t do well under stress, so I try to make things as stress-free as possible. It was about identifying things that stressed me in previous situations and just avoiding them.” 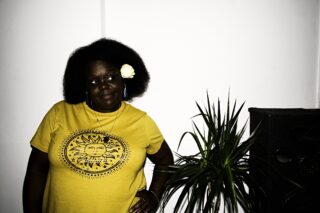 In as much as there was a gestation period for these tracks, it came during the breaks in lockdown. Hackney’s Total Refreshment Centre, a hub for creative minds in the city and an all-purpose event space and recording institution, became the site of regular jam sessions for Thompson and friends when circumstances allowed in 2020 and 2021.

“We kind of made TRC our little speakeasy,” she says. “We’d go there and hang out, play music, get drunk and eat food, it was really nice.” It speaks to the all-inclusive, universally welcoming spirit of the place that after DePlume first introduced Thompson to TRC, she quickly found her own musical kindred spirits there, and continues to make new connections all the while, as well as brushing shoulders with scene-leading luminaries like Shabaka Hutchings.

With the release of Something True now behind her, Thompson’s confidence levels have never been higher. She talks contagiously about her plans for the second EP and beyond, but it is clear that it is not just the endless possibilities of the future that animate her, but the chance to finally put her own unmistakable stamp on her sound. After the negative experiences in her past of being let down by the visions of others, Thompson is keenly aware that there is now absolutely nothing holding her back.