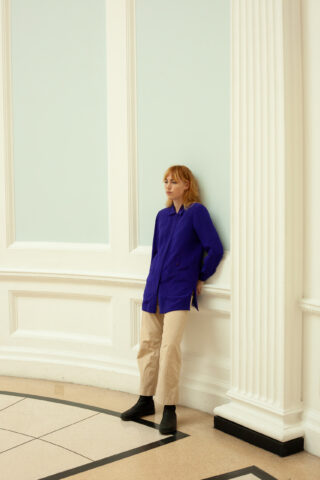 Over the course of an afternoon in Dublin as she prepares to release her second album, the Irish songwriter talks about family, countryside and the things in life that are just too big to explain

Sitting on the grass on a sunny afternoon in the leafy Iveagh Gardens, nestled in Dublin’s city centre, Aoife Nessa Frances lists some of the bands whose names were inscribed on the walls of her childhood bedroom: Nirvana, Deus, Eels, The White Stripes. This train of nostalgia then takes us through gigs she attended as a teenager, from The Prodigy to Primal Scream, and festival appearances by James Brown, The Who and Kanye West long before he became the world-renowned figure he is today. It’s an eclectic assortment of artists to have played a part in Aoife’s formative years as she developed her musical taste, and a surprising selection considering her music today is so indebted to psych-pop and avant-garde instrumentation from the 1960s and ’70s.

When we meet, the Dublin-born songwriter and musician is two months away from the release of Protector, her second LP and first since signing to Partisan Records earlier this year. Her 2019 debut Land of No Junction introduced her as an artist with great promise and garnered deserved critical acclaim. Since then, she’s had a busy couple of years filled with an intense touring schedule and time spent in seclusion writing material that would eventually become this stunning follow-up. In the short distance between her debut and its successor, Aoife notes the considerable evolution – personally and professionally – that occurred between releases and how it has affected her relationship with her debut.

“I feel so disconnected from [Land of No Junction],” she says with a hint of remorse. “I don’t know why that is exactly, because I’m really proud of it and I like the music. I just have no connection to it because I don’t recognise the person singing the songs; it’s a much smaller version of myself. It was my first experience making a record and being totally involved in the process. I learned a lot during that time but I feel so separate from it, whereas I’m excited to play Protector. I’ve learned to use my voice in a different way; or not in a different way, I’ve just gotten more confident at singing.”

It’s a confidence that hasn’t come easily. Across the afternoon, she tells me of the gradual steps towards overcoming stage fright and discovering something unexpected about yourself through songwriting. It’s apparent that her long standing passion for music makes it worthwhile though, helping her come through various personal challenges. 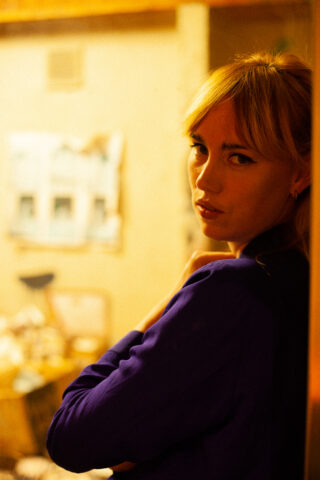 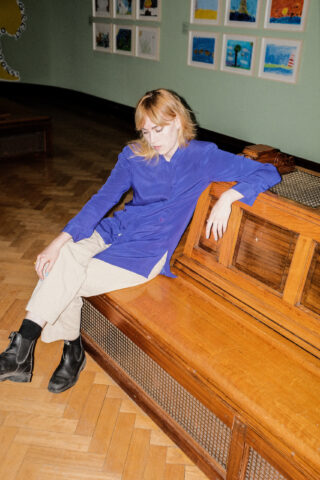 The stories Aoife shares about herself, especially her younger years, demonstrates a life informed by and immersed in music. She recalls how her mother played songs by Leonard Cohen and Joni Mitchell on guitar in the home; her father makes fiddles and has a great love of music and enjoys everything from traditional Irish folk to techno. As a child, Aoife went to violin lessons herself, but discontinued them following a difficult period in her life when her parents separated – she associated the violin with the memories of that time. A few years away from becoming a teenager, she forged a strong connection with a different instrument.

“I got an old guitar that couldn’t even be tuned properly,” she says. “My parents saw that I had a big interest in playing it and they encouraged me to keep doing it. I did lessons, firstly with my parents’ friend Klaus who had also made my birth chart when I was a baby! I only figured this out years later. I still have it, and it was pretty spot on.”

In that initial period of picking up the guitar, she practised constantly and learned how to play her favourite songs, mostly by Nirvana, including their cover of Lead Belly’s ‘Where Did You Sleep Last Night?’. Once adolescence arrived, she began writing her own songs and finding her voice.

“I still have the first song I ever wrote saved on my private Soundcloud page,” she laughs. “It was a very powerful experience writing it. I was around 15. I borrowed my friend’s Swedish grandfather’s guitar and I thought it had these magical qualities to it. I played it for a week or two over Christmas and the song just poured out of me. It happened without me realising what I’d done. It was a very emotional experience; I wasn’t crying but tears were streaming down my face. That actually still happens to me sometimes. When I’m writing or figuring out melodies my eyes just stream. Again, it’s not that I’m crying but something is happening, it’s very strange. I feel like that’s an indication that something is meaningful to me when it incites that kind of reaction.”

Protector is filled with songs set in idyllic worlds decorated thoughtfully with lush orchestration and eloquent descriptions of half moon light and swimming off a remote western Irish island. The arrangements are endlessly enchanting, with heavenly flourishes of harp and an irresistibly smooth interplay of keys, strings and guitar that can lull you into a dreamlike state. Yet when you delve further into the songs, the record’s serene sonic settings bear sentiments steeped in insecurities as Aoife navigates her way through self-discovery. It makes for a deeply affecting body of work given the candid revelations throughout, and the impact of Aoife’s words are all the more impactful delivered in her distinct, deep cadence, which holds the weight of experience of someone more than twice her age. She says that for this record, Serge Gainsbourg’s Histoire de Melody Nelson was a reference point for how she wanted the vocals to be conveyed.

She tells me: “I really love the dry vocals throughout that album. That vocal style isn’t necessarily consistent throughout Protector, but when we recorded ‘Emptiness Follows’, for example, I was constantly like, ‘let’s make it sound louder and drier!’ I love when you can feel a person’s presence in a microphone. It’s an intense thing to do because you feel so exposed and vulnerable; you can’t hide behind reverb. I wanted that vulnerability to be expressed in how the vocals were recorded.”

That vulnerability is expressly conveyed across Aoife’s lyricism. “Truth be told / I’m afraid to be alone,” she sings within the first minute of the album’s sublime opening track ‘Way to Say Goodbye’. A few songs later, she poses the question, “Stranger, what am I worth?” on ‘Back To Earth’, a title which bears great significance since Aoife returned from months of touring that saw her open for The New Pornographers, Alex Cameron and The Weather Station. “I don’t think I was ready for the pace of just how busy I’ve been,” she admits. “I mean, I was ready for it in lots of ways, but when I got back from touring around North America last May I couldn’t land. I was on another planet until recently. I don’t know where I’ve been, to be honest. I think getting back to the countryside has helped with feeling grounded again.” 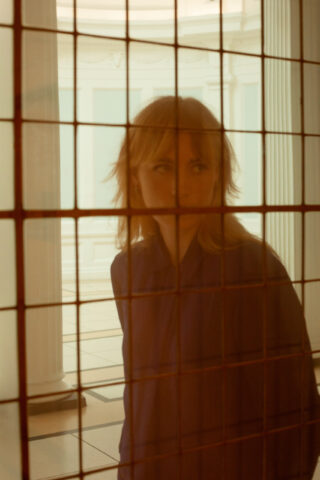 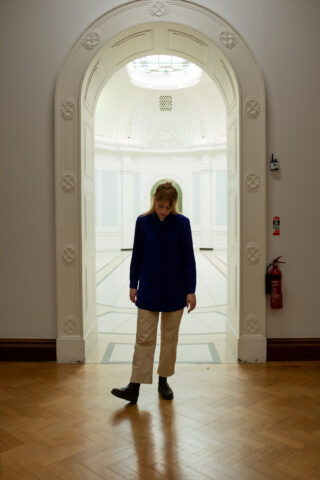 These days, Aoife is no stranger to the stage, but sometimes no amount of experience can make it easier for an artist to stand before a packed venue and expose the insecurities that inspired their art. “It’s intense,” says Aoife of performing her latest material to crowds, “but at the same time, I feel like the act of writing and recording songs isn’t complete until you share the work with the world. I do feel very vulnerable because even having to think about what the record is about in the lead-up to releasing it, you have to think about all these things. I found that really hard because I was almost trying to protect myself from oversharing. Talking about the album brings up a lot of stuff from when I was writing it. When it came to the time where I had to think about talking about Protector, I found I was putting up a massive wall and I didn’t want to say anything about it. Ultimately, though, I know it’s important to share my thoughts on things I’ve experienced because a lot of people navigate similar situations and feelings. I want people to connect and relate to the album, and I know everyone experiences things in different ways but, at the end of the day, we’re all human beings and yeah, the process of sharing these songs with people was the next level of getting to know myself, too.

“It’s really hard to explain things that feel so big,” she says. “Sometimes words can limit things. I like the idea of everyone having their own personal experience because it’s going to affect everyone differently when they listen. I’m never going to be able to fully articulate some of the meanings behind the songs because I get anxious that it would limit how people interpret the material themselves.”

As the afternoon progresses and our time together comes to an end, the public garden becomes populated with people playing with their dogs and wandering aimlessly around the pitch where we’ve been in conversation. In between talking about Protector, we deviate with chat of podcasts and Aoife’s favourite cinematic subgenres – particularly movies about space. We also talk about our patterns of listening to music and how it can be challenging to maintain a similar adolescent fervour for discovering new artists or albums in adulthood. “I go through phases of listening to a lot of music and then I’ll have periods of listening to the same albums all the time,” she says. “Just before I started writing Protector, I went through a big listening phase. Before that though, I had a period where reading and music just went away for me and I lost touch with them. I’m never happy when that happens but I found myself really enjoying listening to music again when I found a Jim Sullivan record called U.F.O. in my house. He’s a really interesting character that just disappeared. He recorded this record and another one, too. The last person who saw him said he went into a motel and he was never seen again! Anyway, I had that album in my car and listened to it over and over again. That experience reminded me of being a kid, going to school with my Discman and bringing one CD and listening to it religiously.”