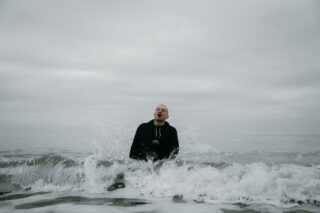 A genuinely DIY outfit lashing out from the North East

For Benefits vocalist Kingsley Hall, making music is about avoiding the worst, most complacent version of himself. “There’s this burning desire to not be silent about things,” he explains slowly over a Zoom call, with disarming sincerity, “to not just accept things. [To resist] this idea that I sit back, don’t get involved, let things run their course. And if so and so gets in, or if that’s my MP then OK, no problem! It’s kind of a desire to say something and get it out. If I stop doing that I end up sitting back and being this vacuous non-entity that sits there and waits for things to blow over.” A pause. “I’ve never wanted to be that. I’ve got this pent-up anger and desire to speak and to shout and discuss. But how do I translate that?”

Since forming in Teesside in 2019, Benefits have become that rarest of things: a DIY outfit that, from nowhere, were able to find an audience purely during the pandemic. Between Hall, synthesiser player Robbie Major, bassist Hugh Major and drummer Johnny Snowball, Benefits make – and self-release – sounds that blur the line between aggro punk, industrial, musique concrete and noise. The track names tell their own story: ‘Flag’, ‘Empire’, ‘Traitor’, ‘Meat Teeth’. Sleaford Mods have endorsed them; Steve Albini is a fan, writing on Twitter that “80s UK had two unrelated scenes that were a big part of my headspace, the Crass/Pop Group ranting lefty/anarchist punks, and Whitehouse/TG/Cabaret Voltaire pure noise. Been a while since something evoked that era as effectively as this Benefits track.” Making smart use of social media videos, without any management or press, Benefits’ strength is in a direct, almost automatic, reflection of the present moment. Hall puts a premium on there being as little time as possible between writing and releasing. In both their rage and approach, it’s doing the work that major label post-punk revivalists often only pay lip service to.

Describing himself as massively nervous about the interview – it’s only his second piece of press for the Benefits project – Hall confesses to holding notes just out of camera in case he loses his train of thought.

“I have a problem remembering things and trying to be lucid or witty or anecdotal,” Hall smiles. “In the past, there would have been the failsafe of having a drink, and I don’t even drink anymore, so that’s gone. If you’re in an indie band, which I have been, you can have the great fallback of being drunk.” In a previous life, Hall had been singer for The Chapman Family, an NME-tipped indie-goth outfit who split nearly a decade ago.

“I love guitars and I love bands and I love noise,” explains Hall of that time, “but I’d fallen out of love with it for a variety of reasons. Some health, some emotional, some psychological.” Hall saw how much harder it was for his band – working-class, based in the North East – than for contemporaries with easier access to the capital and, indeed, capital. As with many survivors of ’00s indie, the fallout was personally painful. “When you’ve had this little song that’s taken you to SXSW or Japan, there’s a big comedown from that.”

Hall ploughed on, expecting a life outside of the music industry. He matured, he had a daughter, life happened. Something, though, began to change in 2019. What if he formed a band that, in its extremity, could be immune from the kind of experience he’d had in his youth?

“The point of the band at first was almost a punk rock thing,” Hall explains, “there’s a stage, shout and scream for twenty minutes.” At an early show – the last show before the pandemic hit – Hall remembers performing alienated even those close to him. “We had this track, this wall of noise with no structure, and I had two pages of A4 stuff to read out. We did that as the last song and the crowd universally hated it. People we knew and were friends of ours walked out, they said afterwards that it was a bit much for them. You had Robbie playing these keyboards with a pedalboard bigger than Kevin Shields, it was insane.” 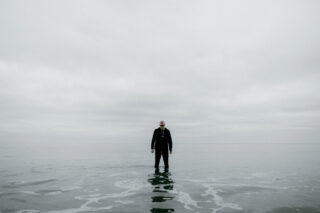 Lockdown was, for Hall, “this big opportunity to reassess.” White-hot punk rage was one thing, but Hall wanted to chase abstraction. “I can’t stand hearing recordings that are pristine,” he explains. “I can’t stand production values, I find them really boring. What I’m trying to do with my process, it’s more like an abstract painting.”

Hall began asking Major, Benefits’ synthesiser player, to send him over three or four electronic drone pieces. “They don’t have to match or be in the same key or tempo. They can be whatever they want. I will then take them and reconstruct them, mash them together. I want it to be like an abstract expressionist painting, as opposed to a pristine and hyperreal photograph. In art and in music, I couldn’t care less about that. I want things to be a mess and all intense.” The project began to change significantly across 2020 and 2021 (when I first emailed Benefits at the start of 2021, impressed with what I’d heard, Hall was already sheepish about the material that was online, knowing he was working on something more potent).

Benefits’ need for speed has already forced Hall to confront many of the dilemmas painfully familiar to independent artists. “We’ve had people asking when we’ll do a vinyl release, but it’s no,” he explains. “Firstly, we can’t afford it. Second, there’s nobody banging on our doors to release this. The point of the band is to try and be this instant, instantaneous reaction to the world around us, so if there’s a nine-to-twelve month delay on a vinyl release, I don’t see the point.” Vinyl, though increasingly imperfect due to global pressing delays and its environmental impact, is at least a revenue stream for artists who have faced two years of on/off live music lockdowns and habitually low streaming revenues.

“The point of our music is to be instant and it’s not really to be overanalysed in the future,” Hall outlines, “There it is now, listen to it now, the lyrics are relevant to the point of time that the music will come out at. We’re going to have to listen to a lot of releases in the next year that will all be relevant to the time that artists had during lockdown. Instead, we have the technology now where it can be that instant. The lyrics to ‘Meat Teeth’ were all written around Christmas, there’s even a reference to a Christmas gut in it, then in January we’ve released it. Look at ‘Traitors’ – I turned that around in two weeks from the point I started mashing it together on GarageBand to the video being up. The videos are the things that take the longest, and waiting for things to turn up on Spotify. It seems ridiculous. In the back of my mind, I’m trying to do these marketing release schedules. I find that fun, to be honest.”

As we conclude our chat, Hall points out that he’s been looking for inspiration in what strikes me as an unexpected place for an incensed DIY collective. Sir Mick Jagger. “I was watching a Rolling Stones documentary on BBC Four the other night; now, Jagger in the ’60s was a really interesting fella I think. He’s very eloquent. He starts talking about what the Stones are, and how the noise of that music, the pent-up anger of their live shows, it’s a reaction against older generations, disillusionment against older generations. I think there’s a similar thing now where there’s this frustration and disillusionment but it’s not about older generations. Older people are disillusioned, the middle-aged are disillusioned. The only ones who aren’t frustrated is this bizarre, wealthy gentry.”