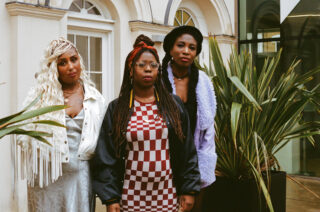 The Black feminist punk band are reimagining the meaning of home

It’s no mistake that our interview with Big Joanie, the acclaimed feminist Black-British punk band who are about to release their second album, Back Home, should take place at Brixton’s Trinity Arms. A pub on a quiet road with mostly white clientele, it’s seconds away from the vibrancy of the district’s main high street. Sweet smells of Jamaican patties are overwhelming, Black girls with colourful braids meander through crowds of rushing Londoners, barbers excitedly converse with their customers as they whimsically shape styles into their thick afros.

Put simply, Brixton is a district known for its Blackness, and particularly associated with people who descend from the Afro-Caribbean Windrush generation, as well as a potent Black African community. The members of Big Joanie – bassist Estella Adeyeri, guitarist Stephanie Phillips and drummer Chardine Taylor Stone – come from these communities; since forming in London’s DIY punk scene in 2013, their shared manifesto has always centred this experience in one form or another.

Their debut album Sistahs, released via Thurston Moore and Prinze’s label Daydream Library Series in 2019, can be seen as a statement of intent. The striking album cover features Phillips’ mother and aunt on holiday in Wales; their smiles are infectious and afros unapologetic, but if you blink you’ll miss the union jack on the headboard of a shop in the backdrop. That flag is a totem that represents colonialism and displacement, but the joy teeming from their stature feels radical and rebellious, as though they’ve found home in a place that doesn’t really want them there.

Sistahs has a song called ‘Token’, featuring the lyrics “All my friends are white, don’t think it matters anyway, but you are different and you are special.” Just like Phillips’ mother and aunt in the cover art for that first album, Big Joanie’s intention has always been to highlight facets of Black experience that have otherwise been underplayed in order to imbue a sense of belonging.

Each member of the band grew up outside London, where there wasn’t much diversity in rock and indie, but Phillips says that “once we were in London and started the band, other punks of colour weren’t hard to find. The community was always there.” 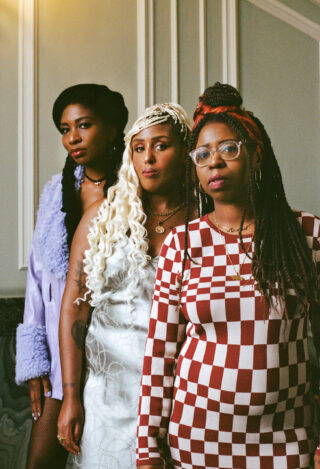 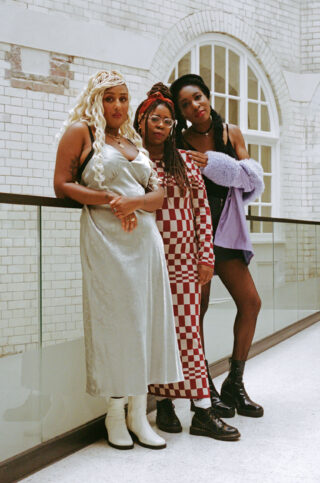 Big Joanie make space for punks of colour in an overwhelmingly white scene, killing the notion that Black interests are a monolith, and their DIY ethos, in the literal as well as musical sense of that phrase, uplifts Black people who were already there but neglected because of the scene’s pervasive whiteness.

New album Back Home extends this. The difference is that it sounds bigger, much more urgent and laid bare. The album’s loudness in comparison to their debut record is the first thing that hits you as a listener, and this was intentional. The band have been inspired by the established artists that they’ve shared huge stages with as their support act, such as Bikini Kill, Skunk Anansie, Sleater-Kinney and British punk darlings Idles. “We didn’t want to make the same album twice,” says Phillips. Taylor Stone adds that having played larger stages they “wanted to be bigger and louder” in the studio: “I guess that means you end up thinking more ambitiously.”

“Sometimes in indie music, you can get a bit lazy when you record,” says Taylor Stone. “‘We can just record the live version and layer up some guitars.’” Yet for Big Joanie’s debut album, it had been more an issue of acquiring these instruments rather than any creative complacency. “We just didn’t have access to a lot for the first album; on this album we felt less constrained.”

“We realised that actually the possibilities of what we could create in the studio were limitless,” says Adeyeri.

“I got obsessed with the [’80s harp-shaped synthesiser] omnichord during the pandemic and eventually bought one off eBay. I love how lo-fi it sounds, almost like you’re trapped in a Nintendo 64,” says Phillips. Listen to ‘Count To Ten’ – influenced by Sharon Van Etten’s use of the instrument on her album Are We There?, it feels like a distant cousin to that album’s ‘Break Me’.

It was also important to them to make an intentional album, not something cobbled together. Sistahs wasn’t simply thrown together either, but this time they came into the studio more deliberately zeroing in on the shape and the form that the record would take.

“Some [artists] need to be better at editing,” says Taylor Stone, citing Drake as someone that maybe fails at this. “All great albums cherry pick their best songs.” But she’s keen to point out she doesn’t think all mega-artists fall short in this regard: “When Adele got rid of the shuffle capability on 30, so that fans could experience the form she wanted for the album, that was great.”

The sound of the album is perfectly entwined with its overarching themes. The simple idea of home can entice feelings of rage, pain, love and hope amongst other emotional states, but seeing through the lens of Black womanhood adds another facet to it. “We were ruminating on the idea of home and what it means, whether it’s here, in the UK, Africa or the Caribbean,” says Taylor Stone. Ultimately, their idea of home has to regard the UK, not just because they were born here, but also the complicated implications of colonial history. “Migrants came to this country because Britain came to theirs. They came to this country as children who are British, but also not.” In recent times, the systematic stripping of British citizenship of Windrush-generation people who arrived on this island as children is testament to this.

Largely though, the lyrics detail more universal themes. Some deal with physical space. ‘Happier Still’ is about wanting “to break out of a depression and pushing yourself to feel better,” says Phillips. ‘Your Words’ is about a communication breakdown between someone who doesn’t understand the pain they inflict onto you. Salient to Londoners, ‘I Will’ tackles the millennial housing anxiety of skyrocketing rent prices, which ultimately leads to people disconnecting from the places they live in.

Other tracks take on figurative meanings – take ‘In My Arms’, a trudging post-punk song about dreaming of another life, tired by what comes with surviving in the UK’s capital. 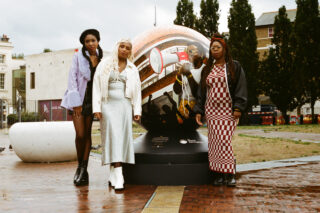 The invariable themes that Big Joanie tackles on this album may shock listeners – especially white ones – who expect them to sing songs that have ardent racial touchstones. While they talk about Black spaces in their literal sense, (“those places where you can have a chat’”), on Back Home those issues are not explicitly discussed.

“When we got together as a band, we didn’t really think about any particular way of speaking with the world,” says Taylor Stone. The emphasis is more so about safe spaces where they can just talk about “stuff.” ‘Stuff’ is an operative word here: it could mean the depression expressed in ‘Happier Still’, or the conflict expressed in ‘Your Words’; these are emotions that are felt by so many people regardless of race.

The expectation that Black artists and creatives just discuss race is poignant, and actually proves the need for Black spaces where tears can be shed or laughs can be had. While sometimes well-meaning, the constant expectation of conversations about the trauma of racism can be jarring.

“People put that on us,” says Taylor Stone. “Oftentimes people say, [Big Joanie] is not what you’ll expect them to be. Well what do you expect us to be? We grew up listening to the same stuff you did, so we will be influenced by that also.”

In-keeping with the theme of home and space, white people don’t realise just how much space they take up, intentionally or otherwise, and they also occupy this space in relation to the pure, universal, widely-felt concepts that are detailed proficiently on Back Home. “We’re just who we are, we’re just human beings who experience some of the same stuff you do,” says Taylor Stone.

Shortly after this interview, Big Joanie will put on Decolonise Fest, a festival that highlights punks of colour from all over the world. Some of these bands are ardently political, while others, like Big Joanie do on Back Home, tackle ranges of emotion. Attendees will learn about the undeniable history of Black people within the alternative space and, crucially, they’ll feel it too. The point of the festival is to create a place for people of colour to feel at home and be heard, away from oppressive white spaces – to talk about stuff. In some ways Back Home is the mirror image of the festival, though that’s not to dissuade white audiences away from listening (“We don’t hate while people,” Taylor Stone laughs). It’s expansive, bold and varied; a testament to a band who, while sticking to their tenets of the DIY ethos, explore higher, wider planes. All the while, they’re grounded in a home that is both figurative and physical – their fantasy world, their Brixton.