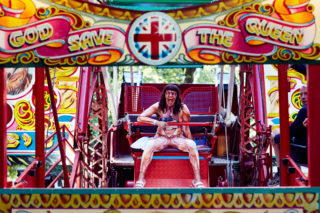 "I would love to make a nipple synth"

Natalie Sharp – performance artist, costumier, provocateur and the musician sporadically known as Lone Taxidermist – is sat at her kitchen table on a drizzly mid-September Monday morning, wrapped in an oversized hoodie, explaining what’s going on with her back. “The last time I was checked, they said it was a ‘dehydrated disc bulge’,” she says, “but every time I go I get given a different result: it’s somewhere between a herniated disc, a slipped disc, a disc bulge, a degenerative disc, a dehydrated disc, or a form of osteoarthritis, depending on who you talk to at the NHS. That used to be frustrating, but it’s not anymore – I’ve given up on trying to understand what my condition is, because if you’re constantly trying to find out what’s wrong with you and how to make it go away, you’ll never come to terms with accepting that you have chronic pain.”

That phrase – “chronic pain” – crops up more than any other in our couple of hours together. Initially, it jars – the sort of phrase that automatically induces sympathy flinches on hearing – but little by little, as we talk, the repetition normalises it, until eventually it’s just there, as uncomfortable as it is immovable, with the only practical option, much like the condition itself, being to make lemonade: “For me,” concludes Sharp, “what’s been more relieving is to just accept what’s going on with my body, and then try to learn ways of helping myself feel better day to day.”

Sharp has had arthritis in her left ankle since childhood after an accident went untreated, but over time that has affected her gait to the extent that, now in her thirties, and to use Sharp’s own diagnosis that’s far more intuitively understandable than any she’ll get from a doctor, “it’s fucked up my back”. The upshot of it all is that she’s lived in constant pain for three years now, drugs are either uselessly weak or come with terrifying side effects, and the condition shows no sign of going away.

Anybody who’s seen Sharp perform before, whether with regular collaborators Jenny Hval and Gazelle Twin, or as Lone Taxidermist, during which crowds are routinely wrapped in cling-film, pitted against six-foot custard-spraying vulvas, or subject to acts of cake-sitting (Google it), may suspect that such a debilitating physical condition as hers is not particularly compatible with her stage presence. And while they’d be right, Sharp’s response hasn’t been to retreat. Instead, she’s confronted the situation by making a 45-minute experimental theatre piece that is directly about the experience of living with and treating her disability. Step forward, then, BodyVice, a piece of chronic pain performance art, encompassing everything from the combined futuristic excitement/institutionalised coldness of MRI scanners, all techno throbs and disconcertingly calm safety warnings, to the raw physicality of the sensation itself. 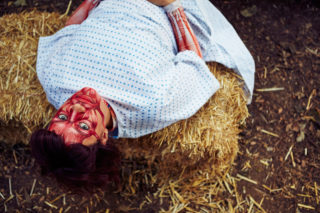 In the show, Sharp, with painted face and dressed in a leotard decorated with anatomically correct muscles and fascia that leaves her looking like a flayed escapee from Gunter von Hagens’ Body Worlds exhibition, moves through a loose narrative that involves being wheeled through hospital corridors, subjected to probes and scans, and finally possessed by a sort of demonic spirit that is simultaneously expressing and purging the intense pain that is emanating from her back. She triggers nightmarish musical cues by running her fingers down a med-school model of a spine that’s been modified to become a MIDI instrument, howls into a distorted microphone, and she and accomplice Tara Pattenden perform ritualistic coordinated choreography that invokes the mechanistic spinning of an MRI scanner’s magnets and the unsettling corporeal invasion that frequently accompanies medical inspection. In the background, a film shows gracefully rotating three-dimensional renderings of various body parts between blasts of abstract shapes that throb in time with the beats.

On paper, BodyVice may read like a horrorshow psychodrama. But in the flesh (and beneath it), the effect is less sensationalist. Sure, it’s urgent and dizzying, traumatic and confusing, but it’s also compelling and unexpectedly evocative for something so superficially odd: as field recordings of boomy hospital corridors and buzzing fluorescent lights zing from the speakers, one can almost smell, synesthetically, the unmistakable hospital aroma combo of iodine, military-grade bleach and industrial-scale catering; when Sharp is shrieking at the piece’s end, there’s a sense that it’s not a verbal encoding of her chronic physical pain, but an expression of the pain itself, whereby the nervous sensation has simply found a direct oral outlet, with no translation required.

Not that the show started out like this. “Initially, it wasn’t about chronic pain at all,” explains Sharp of the show’s genesis. “Originally, it was about my experience inside an MRI machine. When I was in there, it sounded to me like my whole body was vibrating and I was having this transcendental moment, so I wanted to make a journey about the experience of the machine, of being inside this massive magnet, and what that felt like for me. I wanted to see if I could bring together a device and a body, looking at all forms of technology – algorithms, neural networks – and how we can be consumed by AI, how we allow machines to help us, to marry what it is to be human with what it is to be machine.”

Things only became more personal when Sharp’s friend and instrument maker Tara Pattenden, aka Phantom Chips, got involved. “Tara – she’s the real scientist in terms of what’s going on with BodyVice, because she makes the synthesisers and noisy machines, she makes the haptic playable spines – had been reading a book discussing the idea that there’s no language for chronic pain,” explains Sharp, “so from there I started thinking about how we communicate that. Like, what does chronic pain sound like, how does it work, how do you express it through other people?”

Turns out though – who knew? – that finding words for something apparently supralingual is not an easy brief, and although Sharp admits that she’s still trying to work it out, she’s getting closer with each BodyVice performance. “I reckon by this time next year I’ll be a bit more crystallised about what the fuck’s going on with this,” she says with a smile.

How the show will actually look twelve months from now is anyone’s guess. When asked to compare BodyVice to the fetishy, sex-positive vibe of her Lone Taxidermist gigs, all cake and vulva, Sharp’s mind starts to race, rather gleefully: “I’m sure it’ll go that way, knowing me. Further down the line,” she dreams. “If I get more money – when I get more money! – I would love to make a nipple synth.” A what, now? “It would be this wall of skin with a series of tits coming out and on the end of the tit is the nipple, which would be the potentiometer. And you could tweak it. I think it would be amazing,” she continues, thrilled by her own imagination. “And in the part of the show where I’m asking the MRI machine questions, there are some that apply to women only, so I might wear these LED knickers that Tara has made where there’s a light over where the clit is, so when I open up my legs it’d be like the briefcase in Pulp Fiction!” 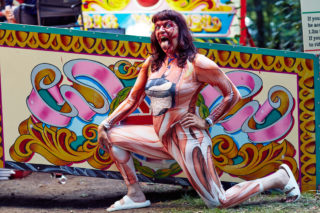 Considering flights of fancy like this, it’s perhaps not for nothing that Sharp has been annointed as the “queen of New Weird Britain”, a term coined by The Quietus’ John Doran aiming to throw a rope around the loose affiliation of artists who occupy the current UK experimental underground – Gazelle Twin, AJA, Snapped Ankles, Hen Ogledd, UKAEA, et cetera. The movement is based less around a common sound than it is around a common attitude, where willful strangeness and provocation is championed alongside a DIY spirit that compensates for the complete absence of budget. More pertinently for BodyVice, though, it’s a scene where gigs – usually utterly immersive and confounding – come far closer than recordings to realising the creative ambitions of the artists. Sharp’s into her title (“I was like, ‘I’ll have that! Where’s my crown! Where’s my fucking red carpet!’”), and rightfully so: after all, BodyVice would be a husk of its true experience were it to be rendered purely in audio form and pressed into a piece of vinyl for home listening.

Simply put, the show requires a stage. Then again, Sharp winces when I suggest she might’ve made something theatrical. “I’m not a fan of that term – it just makes me think of tits’n’teeth, showbiz and jazz hands,” she confesses. “Really, though, I’m just done with being in a band and playing instruments on stage, or even watching people with their modular setup, like this” – she hunches over her kitchen table, making miniature typing gestures – “laptop, Apple logo, nothing else. I’m fucking bored of it. So I want to do something that’s more interesting visually, more interactive. My nature is always to do more, and give more. I wish I could just turn up with a USB stick, and I have it done, but unfortunately it doesn’t work like that.

“I mean, BodyVice is definitely not just music,” she continues. “I don’t think it’s even music at all, really – it’s internal pain.” She pauses, then laughs at the melodrama of her last statement, but there’s an attendant darkness to that thought, too: Sharp had to stop touring her last project, Trifle, after it became too physically painful to perform, something that still upsets her now. Will BodyVice go the same way, adding a meta-performative irony to the existing emotional rollercoaster that the show already navigates? And if so, what of Sharp’s admirable pragmatism of embracing her pain, via BodyVice, and of using that acceptance to help herself feel better? Is there potential catharsis there?

“Well, doing the show is really painful,” she acknowledges. “I don’t know if catharsis is the right word though, because, actually, I feel more like I’m exorcising something: I get really upset and I start screaming a lot and I start throwing myself around the place and sort of convulsing. So it’s a tricky one. I feel like I can’t really answer that right now – or rather that my answer would change all the time.”

Later, she tells me that she likes to hang upside down using specialist apparatus rigged up in her bedroom to help her back – “You hang yourself up and it’s like traction, to stretch out your vertebrae,” she explains, and having witnessed her stage energy and embrace of the wild and weird, the thought of Sharp making like a bat in the privacy of her own home seems almost comically apt. “You’re supposed to do it every day,” she continues, “but I don’t, because I’m quite a lazy person.” The conversation moves on, but considering the imagination, bloody-mindedness, endurance, determination, stoicism, mental fortitude and artistic execution required to pull off something as singular as BodyVice, I start to wonder if that last statement is true.