The British hardcore continuum, turned upside down on the Gulf Coast

“We’re super interested in that, yeah,” Vonne tells me. Vonne (who uses they/them pronouns) is one half of the Tampa hip-hop duo They Hate Change. I’m telling the duo about Basildon, the dilapidating concrete Essex New Town that produced Depeche Mode in the 1980s. I’ve gone fairly deep on the history of post-war New Town development and the rise and fall of the welfare state, and, despite the fact we are here to talk about They Hate Change, Vonne and bandmate Andre are leaning into their computer screens listening intently.

They are not taking the piss.

They Hate Change are self-taught students of British culture and music, inspired by a huge variety of genres and movements and keen to learn all they can about the social and political climates that produced their favourite sounds.

Vonne nods. “I think at this point we definitely self-define as Anglophiles. I dunno where that comes from at all. I think we’re just into music from the UK.”

They speak in this rhythm throughout the interview, Vonne offering lengthier answers and analysis, and Dre interjecting with lively affirmations to imply that Vonne is speaking for them both. 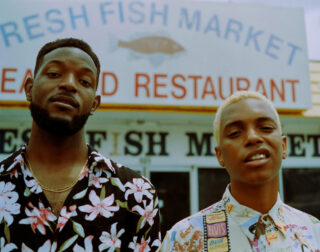 “It’s not that stuff from America isn’t interesting,” Vonne continues, “but there’s an entire separate music culture. We’re from here. I’m not gonna say we know everything about here, but learning about, you know, the Thatcher years over there and learning about the music that happened during that era, it’s like damn. That was a whole thing that happened over there that we had no idea about.”

They reel off a list of genres – happy hardcore, street soul, jungle, UK garage, grime – and an eclectic list of artistic influences including Goldie, Brian Eno, D Double E and Dizzee Rascal… “And Kiwi Records is doing kind of like a new UK garage situation right there,” Vonne tells me, rapid-firing with enthusiasm for the UK scene. “Leading the charge for that – Sharda, those guys. That stuff’s really cool! My man Novelist, remember he was pushing a genre for a year or so, called rough sound? Rough sound is like 160bpm and it’s like… I don’t think he’s on that anymore. Whatever’s coming out of Manchester right now… India Jordan, the DJ producers spanning that whole history of club culture.”

This kaleidoscopic range of influences is reflected in the weirdness of They Hate Change’s sonically packed music, which some critics have hailed as hip-hop avant-garde. Dre laughs when I bring that up, and then reassures me.

Nor do they expect their listeners to have the same musical palate.

“It’s not trainspotting or whatever. It’s not like, ‘Oh, you never listened to Shy FX before, therefore you can’t get into it… if you don’t get it that’s why.’ And it’s like, nah man, the music should be able to stand on its own, regardless of the records it references. You shouldn’t have to know Kraftwerk’s whole catalogue as the entry point into the music. It’s like, ‘Is the music good? Did you make a bunch of good songs? Cool.’ Then we can get into the references later on, that’s not on the face of everything.” 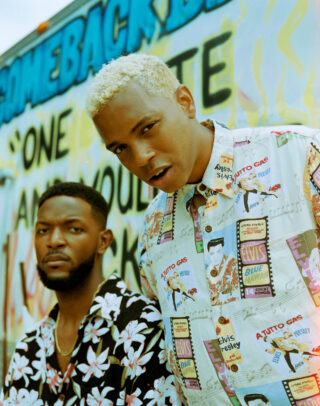 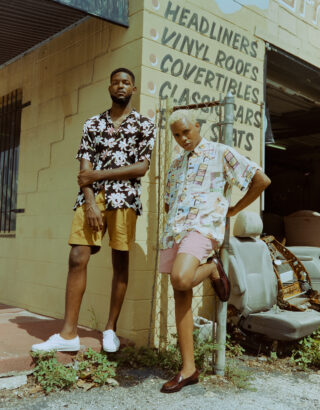 As they lead up to their forthcoming album release in early 2022, They Hate Change have recently dropped the video for ‘Faux Leather’, an electro/jungle/hip-hop mash-up. The video references the album cover for English post-punk band A Certain Ratio’s 2002 record, Early. The single and music video have produced a buzz for the pair – they’re particularly excited about BBC radio plays, and an interview they gave on Radio One.

“We approach everything in this way that it can seem like a hair-brained scheme, you know what I mean?” Vonne says, “Like, ‘hey, so what do you want to do for a music video?’ ‘Well, there’s this album cover we want to reference.’ But to put it out there and have people respond to it in a really great way, that’s amazing. It feels so good.”

“That was surprising,” Dre says. “It was like, ‘Wow, they like us.’ And [for listeners] it was a bit of a glimpse into our influences, whether, like the beginning of the video or towards the tail end at the corner store, in a garage or house party, just performing.”

“Yeah,” Vonne agrees. “The response has been great. Interviewed on BBC Radio One! That’s crazy, you know what I mean? We’re super hyped on that, super hyped on the response. We’re super grateful for it. And honestly, we think there’s a lot of stuff in our catalogue that, if the same people heard that stuff, it would have been through those same channels as well. We’re just excited now that we’ve broken down those barriers, because our new stuff is only better than what we did previously.”

Previously means the music they’ve been making since they were teenagers. The pair met when Dre moved from a small town in upstate New York to Tampa, a city on Florida’s Gulf coast. Though some of the mainstream music he’d listened to back on the East Coast was popular in Tampa, the South offered a whole new menu of culture and sound. Fascinated by the hyper-local music styles his Tampa friends introduced him to, such as Jook, a Florida twist on hip hop, he got together with Vonne to produce his own beats. Using FL Studio, the two experimented with local and world influences, utilising the internet to understand how global music cultures such as hip hop and electro took on hyper-local flavours in different places. Soon, they were sharing music with peers curious to know what the pair were doing while they hung out together.

“We were sampling and trying whatever we could basically,” Dre says. “Just trying to do it.”

“Just doing it,” Vonne expands. “And I was rapping. I’ve always been rapping. So, we would basically be making tracks for me to rap on, but then it started evolving once we started hearing different musicians. It evolved into us realising, ‘Ok we can produce just to produce; we can put out instrumental music.’ So, we started trying to do that, you know? Until we kind of landed on the style and direction we’re in now where we’re both rapping and both producing.”

If the music They Hate Change love is birthed out of the turbulence of a specific late-20th and early-21st century socio-political atmosphere, they recognise that the same is true of their own sounds. But, unlike many artists right now, the duo have no interest in making direct political statements.

“We’re inspired by the feeling… a lot of these different musics were borne out of something, like the political climate – even if you think about early hip-hop, like obviously that’s borne out of a certain thing that was happening in New York at the time. With us, the politics in the music is clear if you are on our side,” Vonne explains, “and if not, it would be completely foreign to you, you know what I mean? I think that’s kinda the way we want to keep it. I think a lot of times if your message is too political it’s easy to manipulate, do you know what I mean? We want to say it to where it’s clear enough for the people that are supposed to get it. But to everyone else it seems like static noise. We’re not making Trump-era music or anything like that, but at the same time, when we decide to pull from different places that energy is kind of there. We might pull from a certain thing unconsciously because this feels really hopeful and really happy, and it just so happens that we were pulling from this era and this is why it’s like that. I think in terms of creating our music I don’t think we consciously go….”

“Yeah. Like, not to talk about other artists and stuff like that, but I read something where the artist was saying that they wanted it to feel like the protests that summer when they recorded the music, and it’s like, alright man, come on.”

“Yeah, that feels kind of whack.” 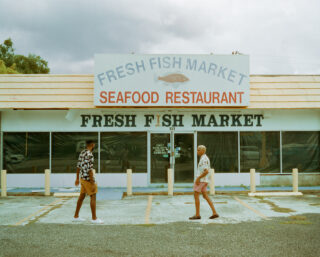 Nowadays, the process of making has barely changed from the early years of They Hate Change (though they’ve jettisoned Fruity Loops in favour of Ableton, which they explain is better for transferring compositions to a live context). The two still get together, hang out, make playlists and jam around the feelings created by particular tracks or movements. Unlike musicians who work from technique, using music to innovate through a commitment to craft, They Hate Change begin with a love of music and push at the possibilities of transmitting feelings. For their current project the playlist is just as eclectic as you might expect, given our earlier conversation.

“Robin Hannibal, DJ Rashad, Dizzee Rascal, Rock Marciano, Yoko Ono, Neneh Cherry – amazing, just like a crazy influence on us – D’Angelo, SWV, Washed Out, Clipse, Harmonia. It’s all over the place,” says Vonne. “Bobby Humprey, Z-Money… it’s a lot of stuff, but all these different songs have these feels that we’re just like, ‘We wanna achieve something here.’ We’re just very inspired by this – this makes us want to rap; this makes us want to produce. So having ‘Buffalo Stance’ on that playlist, you know, that just does a thing to us. We’re not trying to make songs that sound like ‘Buffalo Stance’, but here’s a record that really gets us going in terms of music creation in general. We make these long playlists, whatever, like this is how we feel, or this is how we wanna feel. We’re just making it as if no one is watching still. Cos having the pressure of ‘Oh, it’s album time, this is for the album’, it’s kinda whack. We just keep making stuff in the way we always made it.”

Once the record’s down, They Hate Change are set to tour North America with Shame. I ask, of course, if they’ll be in Britain any time soon, even though the pandemic makes any planning virtually impossible.

“Come up to the headquarters?” Dre asks. “We’re trying to.”

“Not yet,” Vonne says. “That’s our final proving ground, you know? Over there. Over here I think we can do a lot and, in the way that we’re pushing genre and that, we can impress people over here, like, ‘I never heard anything like that before.’ But we not just about to step into the UK and they’re like, ‘Oh you’re doing sub-jungle, oh word.’ Like… you know. We can’t come half-stepping over there like we’re real junglists or whatever we might be doing. It’s like we really have to show and prove over there. So we’re really excited to do that soon. But we’re really coming with it. We can’t half step, at all.”