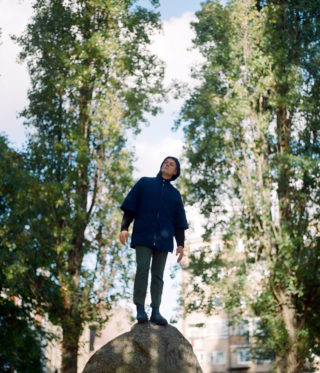 It’s hard to imagine what modern music would look like without Calvin Johnson. Like Bowie, he really does boast a back catalogue that is chock full of seminal, genre-defining work.

His first band, The Beat Happening, shaped the future of indie rock; their stripped-back egalitarian sound paving the way for the whole twee rock movement. His follow up, the Go Team, brought together some of the key movers of ’90s rock, with drummer Tobi Vai and guitarist Billy Karren eventually going on to form Bikini Kill while a young Kurt Cobain filled in on guitar. Even his dress sense has caused lasting waves, his ripped jeans and baggy sweaters becoming the unofficial uniform of grunge.

But it’s the label Johnson founded that has been his most important and lasting contribution to the indie music scene. Since opening its doors in 1982, K Records has built a soaring reputation as an important jump off point for many of the most influential artists working in offbeat pop, indie rock and DIY scenes, giving the likes of Beck, Modest Mouse and Built to Spill their starts. Elevating cassette releases to a near art form, K has also been an important incubator for riot grrrl and the second wave punk.

Yet despite all his achievements, most people would recognise the name Calvin Johnson as the best wide receiver the Detroit Lions currently have, but then, that’s always been Johnson’s style. If Bowie flamboyantly led from the front, then Johnson has acted more like some one-man illuminati, subtly directing and shaping things from behind the scenes. Over the years he’s dabbled in many sounds, from heart crushing acoustic pop, through rockabilly and alternative rock to the oddball funk of the Dub Narcotic Sound System. Through all this, his trademark, downbeat baritone delivery has remained unchanged. It’s as if he’s a character superimposed onto a show reel – Johnson remains the same; the music changes around him.

For his latest record, he has returned to his Selector Dub Narcotic moniker, the name he’s been using for his DJ sets since the mid-90s. An evolution of the disco, trip hop, dub hybrid he perfected with Dub Narcotic Sound System, his new album, ‘This Party is Just Getting Started’, adds more strings to his bow. Songs like ‘Hotter than Hott’ and ‘Let’s Spend Some Time Together’ might add jazz and even samba-like elements, but mostly it is a record that sees Johnson layering a lush, pop sheen to stripped down, no wave bass lines and tightly wound funk rhythms.

It’s a remarkably polished-sounding record by Johnson standards. Eschewing a live band for a world of samples and electronic beats, it’s a record that moves into almost pop-like spaces and is an ambitious leap from the normal frugal sounds you’d find on his recent Hive Dwellers output. Self-released at a time when K records is struggling with well-publicised financial issue, it’s telling that Johnson remains committed to pushing the envelope while simultaneously releasing joyous, weirdo party anthems. 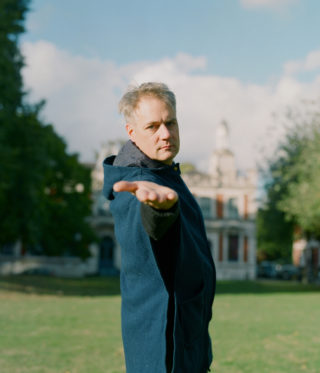 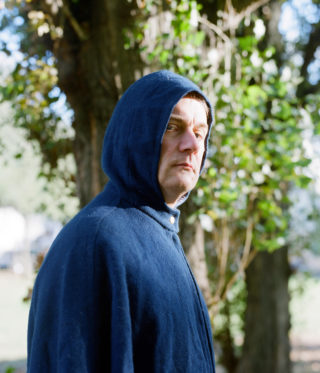 First of all, I want every show that I do to be an all-ages show. That usually precludes playing in pubs. The whole atmosphere of bars or pubs are such a killer of a vibe anyway. They’re mostly dreary places and a bummer to play.

The last couple of times I’ve been in the United Kingdom I’ve been lucky enough to mainly play church halls. I’ve done a couple of shows with Upset the Rhythm in some amazing churches in London. It’s such a fun vibe to play in those kinds of spaces – I mean, they are built for the human voice.

I’ve tried to make sure I play cool places on this tour. Last weekend I played this crazy fun show in Plymouth. It was at this place called Union Corner, which is sort of like a community centre. It looked pretty new, as if a couple of people got together and said, ‘there should be a community centre around here’, so they made one in an old storefront and said to themselves, ‘hey, let’s do some events’. I’m used to the community centre shows: all sort of things can happen. Most of the time the people who run them just give you the key and say don’t use the piano, but these guys; not only were they there, but they were dancing and having fun. Shows like these are the epitome of what I want to be doing. Just people having a good time and coming together in a joyous way.

If that feeling tells them to move, great. If we get a physical reaction, that’s even better. I just want people to go with a feeling and let it take them over.

“I haven’t used a microphone for ten years”

I’ve been on tour with The Hive Dwellers and we don’t use microphones and when I play solo I don’t use one. When you play without a PA, people are completely taken aback for the first minute and a half of most shows, but once you’ve made it through the first song they don’t even notice anymore; they’re just so into it. Using a microphone, you don’t get that – from the first beat people are switched on and paying attention.

When I play with The Hive Dwellers we get such a wide variety of different reactions. Sometimes, people are like ‘cool’ and start dancing, but others are a bit taken aback. They’d stand there going ‘but, it’s not loud enough to dance?’ The thing is, amplified music is quite a new phenomenon. Cajun and zydeco singers in the 1930s and ‘40s didn’t have PAs to fall back on. Most of the time, they were just three people in a room and the whole room was dancing. They were just playing music with a rhythm and they didn’t need a drummer to get people moving. I feel the same – when I used to play solo with just an acoustic guitar and people danced, those were like the best shows. When people feel comfortable enough to respond physically – that’s the best feeling. 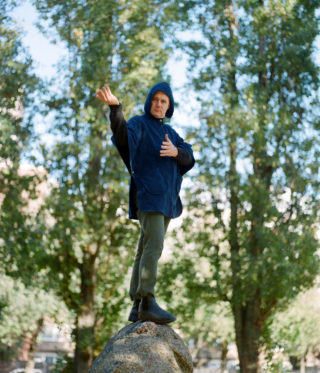 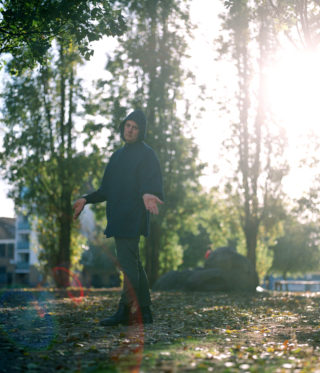 “I’m all about appropriate technology”

On Selector Dub Narcotic I collaborated with a producer called Smoke M2D6. Originally I had the idea that we’d do shows together – he would the do the beats and I’d sing and play melodica. We did a few shows like that, but he’s such an in demand producer that pretty soon he was like, ‘I don’t really have time to do this, but you can do it; here, I’ll show you.’

To start off with I was trying to jury rig it my own way. I’d get a cassette player or a Walkman and I’d just sing along to that, but that didn’t really work. Eventually Smoke was like, ‘just do it the way everyone else does it’, so reluctantly I went out and got this controller thing, with a laptop and a little keyboard. All the problems I was having were solved straight away. I instantly thought, ah, maybe there’s a reason why people do it this way.

“I’ve had to adapt to using a backing track”

With a band you have to be able to communicate on a telepathic level. They can be like, ‘we want to play that part again’ and I can be like, ‘OK, I can sing this thing over it’, so you can change a song on the spot without even having to talk about it. I can’t do that with this, but what I can do instead is alter the phrasing, change the words or change the order. You find that there are other ways to express a feeling other than just changing the music around.

“Music and passion should really go together”

I first started working with Smoke after he did an album on K called ‘All Your Friend’s Friends’, which was a compilation of North Coast hip hop artists. The concept behind the album was that Smoke produced all the beats by sampling different K artists. He’d take the drums from, say, a Mahjongg track, add them to the guitar part from a Mirah song and mix them with some Jeremy Jay to make a whole new song. He did such a good job that a lot of the time I couldn’t even recognise where he got certain songs from. He even sampled one of my songs and I didn’t recognise it; he actually had to point it out to me.

Anyway, he was doing this album and I was like, ‘wow that’s cool –could I be on it?” Together, we worked on a song called ‘All for the sake of Rhymin’’ but we couldn’t quite make it work. The deadline came and went and it still didn’t really work. After the album came out I really wanted to finish the song, so I offered Smoke his regular day rate to come in and finish it. He was like, ‘no man, you don’t have to pay me – let’s just finish it.’ So we eventually got it finished and he was like what else you got? From there, we just started collaborating. Pretty soon it was like, ‘I guess we’re just making an album.’

We just worked on it song by song. It was a collaborative process. We’d get all these different K people to come in and play. Chris Sutton, for example, who has been in several K bands, would come in and we’d say that we need a bassline that kind of goes like this. He’d take that and usually come up with his own thing, which most of the time was actually better than what we wanted. This is probably how session musicians work everywhere – they never actually play what they are told, to the benefit of everyone.

“Disappointingly, we didn’t get everything that we wanted finished”

I had this one song called ‘St George’s Cross’, which I’d started writing with the Vaselines when the Beat Happening was on tour with them in the 1980s. While I was working with Smoke, the Vaselines happened to be touring through the Northwest. I thought, we’ve got to get this song done so they can play on it’, so we rushed and recorded it three days before calling them up and asking them to sing on it. They were like, ‘no, we can’t – we’re tired, touring is hard.’

Just before the album came out I was on tour in Scotland and met up with them again. I really wanted them to be on the album and finish up this song, but they were like, ‘you don’t need us; it’s great just the way it is.’ I mean, yeah, but it would be better if the Vaselines were on it, so I still haven’t gotten it done, but we’re in negotiations. I guess it’ll be on the next record.

“All I can make is Calvin Music”

I’m not really into one type of music over another. For example, I recently cut a single with a band on Arkham records called Hartle Road, who are just one of the best bands I’ve seen. It’s got a garage rock/rockabilly kind of vibe. I think it’s really fun. Hopefully I’m going to be doing a bit more with them in that sort of vein. 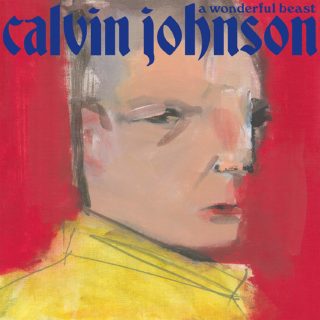 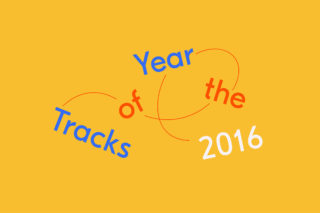