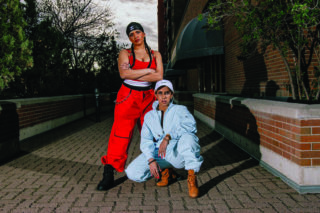 Growing up, sisters Contra and Eboshi Ramesh became aware that voices like their own were missing from the music they loved. “We went through school having not really seen ourselves in the media, not really seen the idea of who we were projected anywhere,” says Contra over the phone from Calgary. Both born in Chennai, India, the pair were still young when they moved with their parents to Western Canada. Developing their world views as music-obsessed teenagers, they grew frustrated with the assumption that their status as immigrants barred them from certain cultural spaces – particularly those associated with rap.

“People who looked like us weren’t really giving art a shot in Calgary,” says Eboshi, after joining her sister on the line from Toronto. “And we wanted to change that.” They made their move in 2017, teaming up to form Cartel Madras: a hip-hop duo receptive to trap, gangster rap and grime influences as well as the ambitious new sounds they heard emerging from scenes in South Indian cities. At the core of their music is an unequivocal demand for greater inclusion of LGBTQ+ and POC artists in the genre.

“We always had a sneaking suspicion that there were a lot of immigrants and women who felt the same way as us,” says Contra. “So we decided we should start making music that is reflective of our lives and see what happens.” Their message found an audience of like-minded people ready and waiting in Calgary; word soon spread of the sisters’ raucous live sets, leading to repeat bookings at venues across Canada well before they released their Trapistan mixtape in 2018. Now signed to Sup Pop, last month they dropped their new EP, Age of the Goonda.

Cartel Madras understand hip-hop’s historical significance as a form of black expression and resistance in North America, while also celebrating its global resonance. “We are continuously paying our respects to what has been crafted before us, and recognise that we’re guests into this land,” says Eboshi. “But it’s also a voice for minorities and the underdog; it’s a voice for the marginalised. We want to create a community within the genre that can make way for a new generation of queer POC rappers – those artists who haven’t been able to find their place within any established subgenres.”

Styling their sound as Goonda rap (“Goonda” meaning “thug” across many South Asian regions), they believe that an immediate and confrontational approach is key to securing ground in hip-hop. “It’s been for us a project of representation, and a project of reaching out and trying to speak to the individuals that we once were,” Eboshi reflects. “We want to look into these communities that we have membership to – as women, people of colour, as members of the LGBTQ+ community – and offer a fearless, unapologetic representation of those identities.”

The pair frequently express their gratitude to the queer artists who led the way in diversifying the genre over recent decades – “we are very aware that we would not even exist if it were not for a Princess Nokia or an M.I.A.,” Eboshi makes clear. However, they are equally determined not to let their music be treated as an afterthought in the process. “Something that I’ve always felt about representative projects is that they’re always relegated to certain boxes,” Contra begins. “But you don’t always have to sound musically the way people think you should. I think, especially for a lot of brown women growing up, saying that you’re allowed to be controversial is exciting.”

“This is very much of a project in craftsmanship and in us having an ear for music,” Eboshi adds, pointing to the duo’s diverse influences. She builds on her sister’s line of thought by highlighting the relative leniency granted to male artists who wish to broaden their sound. “Men in hip-hop get such a pass to do whatever the fuck they want. They get to go back and forth between making unique, thought-provoking music and then also dumb party music, loud aggro trap music; it’s like they’re really allowed to feel all those spaces out.”

At the time of our call, Contra and Eboshi are impatiently awaiting the release of their second EP in early November. Compact at only thirteen minutes in length, Age of the Goonda provides an electrifying burst of the duo’s live show energy in concentrated form. “When we are on stage, there’s a vibrancy that is a real communicative effort between us and our audience – that’s something we’re incredibly happy about,” says Eboshi. The rapper is proud of how persuasively Age of the Goonda manages to capture such a frenetic atmosphere on record; in that regard, she feels it succeeds where last year’s “kind of slapdash” Trapistan EP fell short. “We recorded that mixtape in the basement of our parents’ house,” she explains, hesitant to call it anything more than a steppingstone towards this moment.

Declaring “Bitch, I’m bad I’m brown I’m gold” on the potent lead single ‘Goonda Gold’, Cartel Madras speak with an unapologetic directness throughout their new EP. They reclaim the bravado more commonly associated with male rappers and use it to confidently assert their identities. Songs are abrasive yet often playful: Eboshi makes a memorable threat to put a “Leonardo-di-cap-in-your-ass” on the menacing ‘Dawood Ibrahim (Woof Woof)’. “That line always gets people really excited live,” she laughs.

Contra remembers the challenge of finding the right beat to match the intensity of opener ‘Jumpscare’ – a track that the duo “really wanted to yell on”. In the end, Calgary-based producer Nevik provided the answer with a chaotic, noisy beat that felt suitably overwhelming. “He approached us and said, ‘I’m working on something really weird’,” she recalls. “He clicked play and we knew this was the track that we’d been waiting to make.” They invited the young producer into the studio once more for ‘The Legend of Jalapeño Boiz’ – a comparatively mellow song that Contra values for “allowing us to breathe a bit”.

The sisters are committed to helping other creatives such as Nevik thrive in their hometown. Together with a number of other local artists, including rapper Jae Sterling and producer Yung Kamaji, they formed a collective support network called Thot Police earlier this year. “We want to be collaborative; we want to showcase the sound that is coming out of Western Canada,” Contra tells me. “In the past, Calgary was always been a very boom-bap hip-hop, old hat city. But it has recently become a lot more trap-friendly and has cultivated an underground sound. Thot Police is us saying, ‘We can take this to the next level; we can really put our city on the map’.”

They also want their music to celebrate the trap scene they have sensed building in South India over recent years. Age of the Goonda’s final track, ‘Glossy Outro’, features a rich sitar riff and a cavernous beat made by Kerala-based producer, Parimal Shais. “It has this beautiful sample and is really sparse, lyrically,” says Eboshi of the song. “It’s still undeniably hip-hop, but just so Indian.” The rapper is full of praise for Shais’s work; in particular, she draws attention to his recent mixtape Kumari Kandam Traps, Vol. 1, which involves Tamil and Malayalam voices as well as English-speaking rappers. “It’s so crazy, so ambitious, and just sounds like nothing I’ve heard before. Having those people be a part of Age of the Goonda is great: they’re doing something that we believe in, in terms of how we want to bring Indian culture into hip-hop.”

Contra and Eboshi are quick to check themselves throughout our conversation when they refer to their “fans”, whose support for their project they do not take for granted. “Those moments when someone tells us that this is important to their lives, and that it’s doing something for them – every artist wants to hear that,” says Eboshi. “When you hear your impact statement coming from the mouths of the people you’re speaking to, it’s really great.” It’s also a sign that Cartel Madras are on the right track looking forward: “We’ve always known there’s going to be more people that enjoy what we’re putting out. And so, with that sort of confidence, we enter into this terrifying industry with our heads held high.”