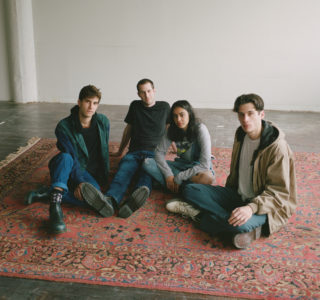 Breaking things apart, putting them back together and seeing what they've got

The day I speak with Crumb, the subject of luck is on my mind. I’m thinking about the way fortune coalesces sometimes, intervening in the trajectory of life, almost as if everything were fated – although we know, of course, that it probably is not. Dumb luck, like everything else, is random. Still, it’s difficult not to see divine intervention, especially when things are going well, or particularly badly. Indeed, how else to explain why the universe seems to poke us in precise ways, leading us to actions, until suddenly you have the story of a life – or, in this case, a band – that hangs together just so?

It’s sometime in the 2010s and four disparate souls – three from New York, one from California – enrol at Tufts University, a private research college on the outskirts of Boston, Massachusetts. One of them, Lila Ramani, has been writing songs, developing demos using the production software Logic, and writing lyrics to melodies on her guitar – or sometimes setting music to the lyrics of poems she composed in a high school creative writing class. The others (synth, keys and sax player Brian Aronow, bassist Jesse Brotter and drummer Jonathan Gilad) have their own music practice. All four of these Generation Z-ers are into music from the ’60s and ’70s, and by reasons of fate, or dumb luck, they find themselves sharing accommodation and listening to one another’s Spotify playlists.

“We became friends early on,” Brian explains to me, “and just played music with eachother, and then Lila brought in the songs, so we’d meet up and record them. We had the intention of just recording those few songs and moving on, and then… now here we are. We just kind of keep that process continuing.”

“Yeah,” Lila says, “music was the first connection between us, I feel like. We were all just trying to play music during that time, and that’s how we met each other and became friends and started a bunch of different projects, and that’s how this [band] came about.” 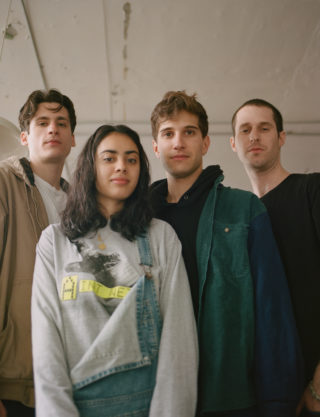 Here they are then: Crumb, a band, sort of effortlessly. After releasing two EPs of the songs they recorded in college (2016’s Crumb and 2017’s Locket), the subsequent critical buzz led to a short DIY tour (“like house basement shows, really low key… down the east coast”). Three years later they are still touring, having supported bedroom-rock musician Alex G. And now Crumb are about to drop their first album, Jinx; a strangely delicate psych-rock and jazz inflected record that has already been bewitching audiences at their live shows. It all seems to have happened quite quickly: the critical acclaim, the international tours – before they’ve even released an album. There are bands that work for years and years to build an audience base that allows for that kind of experience. I wonder whether there are moments when the four of them have to pinch themselves.

Brian nods. “The past few years have honestly just been those moments repeating themselves continually. Our expectations were really none. Like really, so modest at the beginning, just focussing on the songs and what the band was gonna look like. So there’s a lot of those moments. Being able to play alongside bands we love very much, and connecting with bands and releasing music is always that. Yeah.”

“The Europe tour was really crazy,” Jesse continues. “I hadn’t been to most of those places and to be there for one day at a time… I think we played twelve shows in ten different cities in fifteen days and it was just like one big snapshot. My memories are so… it feels kind of like a dream. I was there but I was half asleep. It was so cool to see like, families, children – like 9 year olds and parents coming to our show. So I think it was again those experiences over and over, seeing what your music has done in the world…”

The highs of the touring experience sound incredible – playing to hundreds of fans in London, hearing their song lyrics sung back at them, tracing the footsteps of bands like Black Sabbath at remote venues in the mountain towns of Germany. Even the camaraderie sounds idyllic – Brian tells a story about how, travelling in a separate car from Lila and Jesse, he and Jonathan would play a game where they challenged each other to play tracks the other would hate, introducing one another to “weird free jazz”, and “heavy thrash” in the process.

Still, the constant touring has been a learning experience, and navigating life on the road and a burgeoning music career, just out of college, makes it difficult to carve out a clear identity, and to engage with the wider world. It’s easy to lose sight of the bigger picture. “I think the last year or two has been a lot,” Brian says. “Like, we’ve been touring and making music non-stop and trying to balance that with being ourselves. Being people and being musical people, like, getting to have that, real life needs to be funnelled in as well. So we can enjoy all this. Because no one teaches you how to tour – you have to learn and there are a lot of good things and a lot of hard things.”

One of the good things, Jesse explains, is the way being on the road forces you to scale down, and remember what’s important. “I think there’s something that empowers actually about reducing your stuff – your belongings, your property – to what you can bring with you. And you realise the insides are the stuff you bring with you. And I feel like in daily life it’s very easy to be surrounded by, like, your environment, your stature and what you feel like you hold onto. So just to break that apart, put it back together… see where you’re at.”

Lila agrees. “I feel like I’ve just started to embrace that lifestyle, not really having a base. As opposed to just being in one place. It’s definitely a huge adjustment. And we all at the moment don’t have any other job besides being in the band so that’s an interesting thing to navigate, just structuring your time to live; to do the creative stuff.” 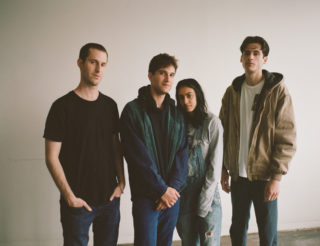 The creative stuff is what they’re here for, and they are certainly embracing the opportunities touring has offered to develop their creative process. Not just playing with and learning from other musicians, but playing with and learning from their own songs. Lila explains that the band have particularly enjoyed the opportunities for improvisation at the live shows, riffing on that jazz tradition to give each audience a unique experience. In fact, the live shows are where they have developed the material for the album, taking new songs, experimenting in front of an audience and then taking the feedback from the shows into the recording studio. They describe the writing process as a year-long evolution.

“I think it’s like having children of different ages or something,” Jesse tells me.

“Uh-huh,” Jonathan laughs, “And some of them are going through puberty.”

“I feel like each one is trying to find its final form,” Lila says, “And sometimes it takes a really long time, and sometimes it’s just already there.”

The album recordings act as what the band call “time stamps”, rather than definitive versions of the songs. “It just gets stamped at a certain point. Certain things will just stay as they are for a period of time and there are certain songs that have been hanging around for less time but then in the studio something will change about them spontaneously, and that’s what’s there. And sometimes, even later on, like when we play our first EP songs on the road, we’re always kind of still changing things. Just still searching within each song for like, what’s this song about… So it’s always an evolving thing.”

And, on the subject of evolution, we’re back to luck again. Even the title of the album, Jinx, suggests the ways the band are hyper aware of the role luck has played in their journey so far. “We’re lucky,” they say. “We’re an independent band, the listeners totally allow us to keep making music and we’re very aware of that and grateful for that. And also, just like our whole team, something we’re really proud of from our visual collaborators to people who come on tour with us, it’s all about the personal connections and shared admirations for what we all do. We’re really grateful for that.”

They speak a lot about gratitude, and although it seems like a genuine sentiment, I also get the sense they are using gratitude as a shield, a talisman, to ward off the possibility that luck might run out. I suppose, as Crumb prepare for their first break in touring in almost three years, there is a sense of apprehension about what’s next. “We’re plotting things up right now, nothing official. But we’re taking the summer off to write, take some time out. Get back together in late summer, do some more,” Lila says.

“We’re still evolving.” Brian reminds me. “This is just the beginning. We feel very fortunate. We’re a relatively new band – we’re really excited to keep developing as a group. It’s only been three years of working together… developing this project, and each year has looked very different. It’s been… beyond words for sure.”