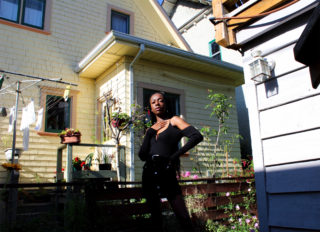 Anger is an energy

“I am an aggressive woman so my music is aggressive. I live in a world that is aggressive towards my identities and the body that I inhabit, so of course my reaction is going to be aggression.”

Take it as a mission statement. The Vancouver-based independent electronic producer Debby Friday doesn’t sound angry as she speaks, rather quietly resolute.

“There is a whole stigma around being an angry queer black woman. I’m just really tired of it, it’s very un-nuanced. The energy I have in my music is about not being afraid to embody that confrontation.”

Energy is certainly the word. The adrenaline-charged, fulminating pace at which Friday’s debut EP ‘Bitchpunk’ moves is something to behold; a cyclone of styles and modes of expression that defy genre categorisation, but that certainly draw from punk, drill and techstep. Call it what you will, but Friday’s own description is far closer to the mark: “I would describe my music as ‘thunder’.”

“It just came out of me. I had no idea what it was going to sound like when I started making it. It was the first time I was making a comprehensive body of work, but it was a very natural progression.” It may be their first release, but there is certainly no sign of early tentativeness from Friday. Opening track ‘C’est Quoi Ça?’ finds them snarling lines like, “I beat ya like a face, honey/Pretty lil’ Debby but I bet I leave that nose runny,” and you can hear the hubristic smirk on her face as she says it.

Whilst there is a strong element of anger in the writing, Friday has reached a point where merely articulating their frustration is not enough. “I think a lot of queer artists of colour can identify with feeling enraged when waking up to the realities of oppression, but I find that these days that’s not really what motivates me.

“Of course, I’m still upset about it, but I find now that I channel my anger in a more constructive way. Instead of being angry about the way the world is, I feel more animated to change it. My whole thing in life is waking up to my own ability to shape my life. Part of that is being authentic to yourself, saying ‘fuck it, I’m not going to live by society’s rules of what a black woman is supposed to be doing or the music I’m supposed to be making.’”

Friday is suddenly animated. The potency for art to steer society is what lights her up. “Change is a violent force. It doesn’t often happen quietly or nicely. It’s what brought the universe into being, it’s what allows society to progress. It’s an aggressive force. The energy I have in my music is about not being afraid to embody that aggression. The things that come up in our cultural artefacts are just a reflection of what is going on in our collective consciousness. I’m aggressive about changing the world, I’m not going to apologise for that.”

As well as identifying as a queer black woman (she chooses to use ‘she’ and ‘they’ pronouns), Friday has also spoken about identifying herself as a confrontation. “We grow up with all this conditioning about how we’re supposed to be or act, and a lot of the time mental barriers keep us in a place of fear or shame and of not being true to ourselves. Identifying as a confrontation of me against myself is my way of challenging myself to break out of whatever shell I made for myself to survive.”

This lucid method of self-reflection extends to Friday’s own family heritage. She moved to Canada from Nigeria with her Yoruba mother when she was two years old, and so identifies with both cultures. “My experience of my background is very much informed by the fact that I grew up in the Western world,” she says. “The way that I identify as Nigerian is going to be different to the way someone who was born and grew up in Nigeria does. I think that’s the same for a lot of people who are in a diaspora or who are immigrant young people. Our cultural identity is in the stage of taking form as something different, because we are something different. Even though we share the same background, we don’t share the same lived experiences as those who are, quote unquote, ‘back home’.”

2018 has seen some fundamental changes to Friday’s life too, though. Two months ago, she took the decision to undertake a 3600km relocation across Canada from Montreal to a new base in Vancouver. “Basically I just needed a complete and total change of environment. I felt Montreal wasn’t really conducive to my journey.”

The change came as Friday was barely a year into their life as a producer, having previously travelled across North America as a DJ in 2016, playing underground electronic club music. “At first, it was just something I did after finishing school. I didn’t know what I was going to do with my life. But by 2017 I’d got to the point where I didn’t feel like I was challenging myself [as a DJ], so I became more and more obsessed with producing,” she explains, clearly still enthused by the change in direction.

She set about making the ‘Bitchpunk’ EP as an entirely solo project, somewhat out of necessity, but also as a result of that phase of her life. “It was in a time when I was taking the decision to leave Montreal and I wasn’t doing live shows. I was in a funk. I felt very dissatisfied with a lot of things in my life and I was alone. I was in a period of deep isolation.”

She posted the finished product on Soundcloud, where it quickly drew significant attention. “I am part of a community of Internet-based artists and I have met a lot of people through Soundcloud. But at the same time I feel outside of that because I do often feel alone. I don’t know if that’s something I’m imagining, but I do feel separated.” I suggest that perhaps this is more and more the norm for artists starting out now, but Friday’s reply is enigmatically supportive of the online structure. “You can’t touch the Internet, but you can feel the impact on your life. A lot of [Soundcloud artists] come from personal histories of being ostracised growing up, and it carries over into your work.”

Some of the people she has met have become professional allies, too. “I have been slowly starting to collaborate. Eventually, I do want to produce music for other people. It’s still under wraps, but I have a few things coming out with people whose work I really admire.” On the subject of future releases, she also suggests that her second EP will be coming out “sometime in the late fall”, and she speaks about the possibility of working with a label for it too: “I have had offers, quite a few actually.”

Unsurprisingly for a young and hungry artist, one medium is not enough to contain Friday. “I consider myself an experimentalist,” she says. “If I discover something I find interesting, I’ll most likely take it up and see what I can do with it.” She has a penchant for live coding, which has now begun to expand into the even more improvisational world of visual live coding, and she has been taking more and more interest in the world of experimental film-making. “I never thought of myself as a visual person,” she tells me, “but then I did a project for Abstract Without Abstraction, which involved some video art, and I found that I really liked it. With my next EP, I plan to direct some music videos.” She goes on to talk about future dreams of writing the score to her own film, leading to an enthusiastic sidetrack that finds her eulogising René Laloux’s 1973 French sci-fi animation La Planète Sauvage as well as Mica Levi’s spellbinding score for Jonathan Glazer’s ‘Under the Skin’.

It is just a sample of the voracity of Friday’s creative urges. She recognises that every corner of the artistic map could be her playground. For now, though, music production is her obsession. If her very first outing is as uncompromisingly fierce and exhilarating as ‘Bitchpunk’, just imagine what the next bout of thunder could sound like.