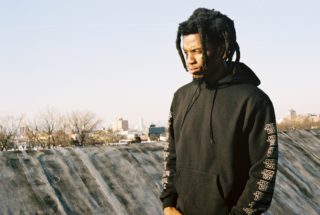 'I want my shit to sound different every time. You either take that to the bank or don't mess with me'

Denzel Curry has crammed a lot into his 22 years. The Floridian rapper has already released a series of mixtapes, two albums and two EPs, as well as touring around the world. His debut album ‘Nostalgic 64′, which dropped when he was just 18, was an accomplished debut that combined ’90s rap with a modern trap sound, and dark social commentary with pop culture references. He followed this with the ’32 Zel/Planet Shrooms’ double EP in 2014 that explored a more psychedelic sound. Across both projects he introduced numerous different personalities such as Raven X Miyagi, Aquarius Killa and Denny Cascade, highlighting a young mind brimming with creativity that refused to be nailed down to a traditional sound.

Last year, Denzel Curry released, ‘Imperial’, his second independent studio album, that took his sound to a heavier place. It’s explosive, confident and Curry raps like a man possessed. It led to a place alongside lil Uzi Vert, Desiigner, 21 Savage and lil Yachty on the XXL Freshman list 2016. Curry also became known for his wild live shows. His Lovebox 2016 set was a weekend highlight and a Jazz Cafe headline performance last December was a rowdy late contender for gig of the year. At a show in Tennessee he fell from the ceiling, through the floor and into a bathroom. He got up, performed ‘Ultimate’ and left in an ambulance.

This all led to a distribution deal with Loma Vista Records to release his upcoming third album, ‘Taboo’, although despite signing Curry has still maintained his independence. “I still got my masters and my creative control,” he told me. “It’s just they have the system and backing. They’re really supportive and do things I can’t do, or at least it would take me a long time to do.” After briefly becoming disillusioned with music at the start of this year, Curry released the ’13’ EP, characterised by dark, industrial beats and distorted vocals. In many ways it seemed like a rejection of the mainstream that ‘Imperial’ had thrust him into, with Curry viciously delivering lines like, “Denzel, why you had to make bloodshed? Cause a fuck nigga fucked with the ultimate.”

Since then Curry has seemed revitalised, releasing ‘Skywalker’, the first official single from his forthcoming third album ‘Taboo’. ‘Skywalker’ sees Curry exploring a more melodic sound and singing as well as delivering the tight raps that his fans know and love. Next month Curry will be the main support on Run The Jewels U.S. tour and he returns to the UK in November to headline the Village Underground.

I spoke to Curry on the phone last week to talk through the last 12 months and his plans for Taboo.

The last time we spoke was after your Lovebox set. We chatted how ‘Imperial’’s Ultimate Denzel Curry was a combination of your previous personalities. Since then you’ve said you’re in Ultimate Omega Mode, what’s changed?

On ’13’ you seemed to be exorcising a lot of dark stuff. Did it help you clear your mind to work on ‘Taboo’?

Yeah, it really did. I was so, ‘ahh, I need to do Taboo, I need to get it done!’ I felt like I wasn’t dropping anything. Some of those tracks are old, some of those tracks are new. The newer tracks were ‘Hate Government’, ‘Zeltron’ and ‘Heartless’, the other ones were old. ‘Bloodshed’ was from early ’17, ‘Equalizer’ was from ’16. I recorded that the same night I recorded ‘Skywalker’.

Earlier this year you were struggling to motivate yourself. What happened and how did you work through it?

Really it was because I was seeing my peers elevate, the guys from the XXL class elevate and I felt like I was still in the same spot. That’s when I thought, ‘what am I really doing this shit for?’ Then I went to Coachella and I met Drake for the first time. Drake is a fan of my music and I was like, ‘yo, what the fuck just happened?’ I didn’t understand. It just made me feel like, ‘damn, if someone like him is listening and he had the decency to tell me, I need to keep doing this shit.’

I read you were working on comics and other artistic outlets at that time. Are you still pursuing those?

That’s not changed. I’ve just got to make sure my music gets off the ground first, and then I can turn to the next thing. As soon as I’ve done what I’ve got to do in this field and make my mark, then I make my mark in the next one.

Do you think when you release those other projects it will help people understand your music more?

The next album is ‘Taboo’. What inspired the name?

The stuff that we assume is forbidden, like drugs and shit that we couldn’t talk about back in the day, that’s the norm now. It’s cool to be a junkie, to sell work, it’s cool to do all types of shit. It’s cool to hit girls, to fucking be degrading. It’s not cool to do the opposite. That’s the taboo. That’s forbidden. I feel today’s age, the whole process of taboo is doing things you don’t see people doing.

I think there’s an interesting comparison there to politics too. How quickly Trump’s racism, sexism and transphobia went from controversial to normalised.

You’ve alway commented on social issues in your music. Has the election of Trump changed how you approach this?

I felt like I was part of the problem honestly. Being disillusioned and thinking, ‘nah, that’s not gonna happen, this nigga ain’t gonna be president.’ Then this nigga became president. So what the fuck just happened? I don’t get all the choices I want, but I definitely didn’t want this nigga to be my president. Now I’m forced to write this. That’s how I felt like at the time. I’m not a super-political nigga, but at the same time I’m going to voice my opinion to people in my age group.

‘Skywalker’ sees you exploring a more melodic side compared to ‘Imperial’. Is the rest of ‘Taboo’ like this?

Everyone listens to ‘Imperial’ and thinks that’s the only thing I can do, but if they go back through my discography and listen to ‘Nostalgic 64’, I don’t rap like that. I didn’t rap like that on ‘Zel’. Each one sounds different. ‘Imperial’ sounds heavier because I was going through a heavier time in my life.

You’re singing on ‘Skywalker’, were your nervous about that at all?

I really liked your Tweet telling people who wanted to listen to ‘Nostalgic’ to just go on YouTube and search ‘Nostalgic 64’.

It’s real shit. If you want to hear N64, go on YouTube and listen to that shit. I’m not making the same shit twice and if you have a problem with that, don’t fuck with me, because I’m not going to give you the same shit twice. Don’t expect Kendrick Lamar to give you ‘Section.80’ five times. He’s not going to do it. It’s like telling Outcast to ‘Southernplayalisticadillacmuzik’ ten times. I told them straight up. I gave them ‘Imperial’ and ‘Imperial’ sounded nothing like ‘Nostalgic’ but everyone still fucked with it because it was gangster. I just feel like my fanbase tests me sometimes. You all know I’m going to come out with a hard album, so why are you questioning me?

If you came out with something similar people would call it uninspired. Sometimes you just can’t win.

They don’t know what they want at all. I know what I want. I want my shit to sound different every time. You either take that to the bank or don’t mess with me. I’m not going to give anybody any garbage.