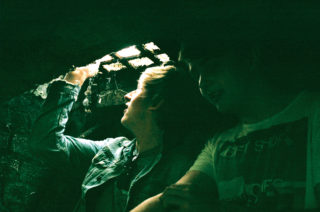 In their first interview, Disclosure brothers Guy and Howard Lawrence discuss how they've been making music their whole lives. They're currently 16 and 18.

“One radio station in Ireland thinks that we’re twins,” says Guy Lawrence. For that to be true of him and brother Howard, poor Mrs Lawrence would have had to have been in labour for three years, and that would have been something you’d have read about in the papers, like when really old people have kids. Guy is nineteen, Howard is sixteen and the pair have been making minimal, downbeat 2-step since Burial clipped and tripped his way out of their area code.

“We’ve been making music our whole lives,” says Guy “it’s more that we’ve only just put a name on it recently, and we’ve only been making this kind of music recently.”

It’s a tale that we’re hearing more and more, especially of young folk south of the Thames, in and around Howard and Guy’s hometown of Croydon. But Disclosure (named not after a dodgy Demi Moore/Michael Douglas vehicle but rather a randomly selected word on Guy’s car tax renewal form) don’t peddle the well spun line of ‘we-just-started-mucking-around-with-sounds-cos-we-were-bored’. They’re not self-professed loners or socially awkward weirdos who’d take a sampler to the pictures if they could. They are, rather proudly, two brothers from musical stock – their father a “really good guitarist” who was once signed to CBS and mother a professional singer – who’ve both studied music academically. “We’ve got musical parents,” explains Guy “so before this it would be me on the drums, Howard on bass, mum on the piano – as cringey as it gets, really. And then we both started playing acoustic guitars – not writing songs, just more technical stuff – and then we just got so into the new music that was coming out of the dance scene.” 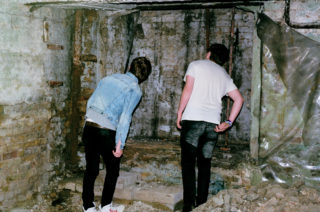 The dance scene – or at least the best bits of it – just so happened to be being played out on the brothers’ doorstep. So, while Howard was entering his obligatory, teenage emo phase, Guy was discovering grime and later Benga and Skream, having gone to school with the former’s brother. “But then it merged,” says Guy “and we both started listening to people who were coming out like Joy Orbison and Floating Points.”

Now, they agree on more things than two teenage brothers should. They agree that Burial was the real entry point for them getting into the ambient, electronic music they make today; that dubstep is “far less expressive than 2-step” and thus far more boring; that once Howard begins getting involved with the recording and production process “there will be more fights”.

Until then, with studies in music technology under his belt, Guy lays Disclosure’s soulful UK garage to tape, and next month the first two songs recorded by the duo are being released by Moshi Moshi.

‘Offline Dexterity’ and ‘Street Light Chronicle’ are both propelled by that faithful, classic 2-step combo of clipped beats and chipmunk’d vocals that sound as if they’ve been phoned in from the top of a distant mountain. On ‘Offline Dexterity’ there’s a nutty synth riff that loops over and over too, and Howard says that the groove of the bass is thanks to Jamiroquai (a big influence). B-side ‘Street Light Chronicle’ further points to Disclosure’s funk leanings, featuring an organ that gently throbs the same three notes that’ll groove your night bus all the way home. In many ways, it’s like a lot of negligible 2-step – expert in its simplicity, comfortably making minimal plus minimal equal something intriguing and hypnotic. But Disclosure’s tracks also have something that resembles soul, no doubt because Howard and Guy still listen to a lot of Motown – once again, more guitar-based music.

“It is weird,” ponders Howard “because that’s what we’ve grown up on – band music. Our dad used to play us a lot of Genesis and prog-rock too, so this couldn’t be more different. We’ve had to listen to so much horrible stuff, but I still listen to prog every now and then. It’s got its place.”

“I think our parents like the music we make now,” says Guy “because it’s quite listenable, it’s not heavy dubstep or anything.”

“But it’s not their thing,” says Howard. “I don’t think they’d listen to it if their sons weren’t making it.”

Guy: “No, but they don’t hate it. They just give mumsy answers like, ‘it sounds really clear, guys. Well done!’ or, ‘it sounds like it could be on the radio’.”