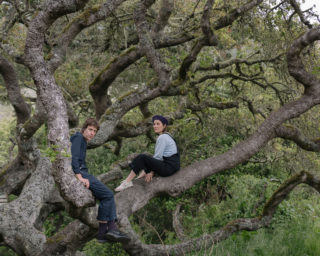 There’s a strange beauty to the music of DRINKS, and when you consider the extraordinarily singular talent behind this pairing, it’s easy to see why: the project takes the best aspects of Cate Le Bon and Tim Presley’s solo work – Le Bon’s erratic exploration of melody and chaos, and Presley’s gentler psych leanings – and creates a particular kind of skewed magic when combined. Their disparate musical upbringings (one grew up on American hardcore, the other cultivated by her parent’s music in rural Wales) also informs the label-rejecting, genre-defiance of their music.

I spoke to the pair at their home in LA, to talk about their time spent recording in France, lazy journalism and Mark E. Smith anecdotes. 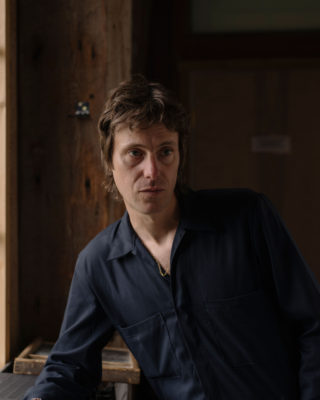 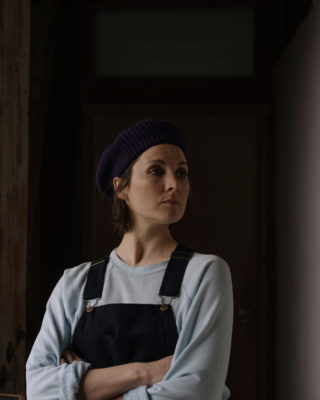 Hayley: Hi Cate, hi Tim – how are you both today?

Cate: We just woke up!

Tim: I’ve got rolling pins in my hair! [Laughs]

H: Tell me about how your partnership as DRINKS came about?

C: We met in 2013 when Tim’s band [White Fence] opened for me in Santa Monica and we liked what each other were doing. About six months later I moved to Los Angeles and we became friends. We always said we should do something but never thought we ever would, and then Tim needed a guitar player for the White Fence tour and I stepped in and that was kind of the beginning of us working together. As soon as we got back from tour we got into a rehearsal room and luckily it immediately worked as a musical partnership. We just loved writing and playing music together and it soon transpired that we work really well together, which isn’t often the case.

H: You recorded ‘Hippo Lite’ in an old mill in France – the way you described it in the press release sounds really idyllic. What was it like to record in a place like that, free from all distractions?

C: I think it was instrumental in being able to shut out the outside world. That press release – there’s a bit of poetic licence there, but genuinely, we had no Wi-Fi, no phone, and no reception, and for the first few days it was kind of unsettling but after that it was just glorious – you know? I felt much less anxious than I usually do. We had to go into the village to check our Wi-Fi and to begin with there was this urgency that was like “I have to check my email!” but then after a few days I was like, fuck it – we’re in this beautiful house and we’re here to make music. You realise that there’s so much of that kind of clutter in the modern world. Even here during recording I noticed, between takes of songs, that I’m checking my phone and it drives me mad. It’s like a horrible disease.

T: I always find when you go somewhere to make a record, and you exist in this bubble and you don’t really ever leave it, then you tend to make something a lot more cohesive – something with a lot more character, you know?

H: It must’ve been really hard to come back to the hustle and bustle of everyday life after that.

T: Well, no. As soon as we got onto the motorway to leave and we both got phone reception the dream was over. It was so sad how quickly we went back to normal. Especially because to begin with we were saying things like “this is brilliant! Let’s get rid of our smart phones!” 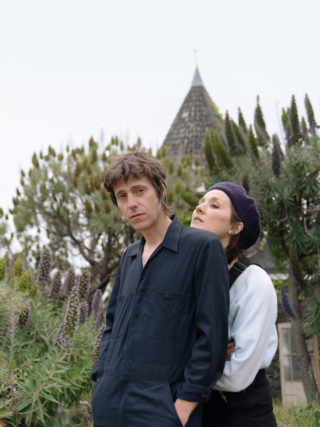 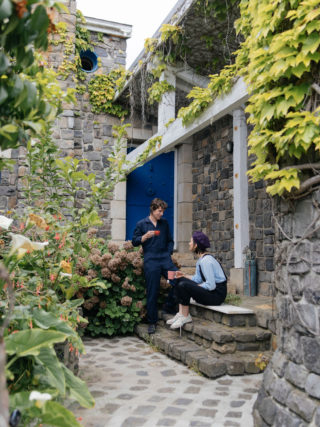 H: Tim – have you ever been to Wales? It must have been quite a shift culturally from your base in LA.

C: Tim’s not allowed to talk! [Laughs] He likes it a lot, he thinks the people there are the best.

T: I love it actually. I think in my mind I thought it would be the same as the rest of the UK but it really isn’t. I like it a lot, I have to say.

C: Even after living in LA for four years I don’t think anything is ever going to break through this accent. Tim thinks I sound like an alien.

T: I have never heard anyone who sounds like Cate in Wales.

H: Tim – I know you spent a bit of time in The Fall. How did the news of Mark E. Smith’s death affect you?

T: Yeah, I was real sad. I had just left Manchester literally the day before, and it was so strange because I was thinking about him in the airport, and I saw a Manchester United poster or something – his football team…

C: No – Man City was his football team.

T: Oh, Man City is what I mean, the blue one! I don’t know about football at all. But anyway, I was thinking about him, and I had this strange moment where I thought for a second – like in a daydream – I should just not get on the plane and go visit him or something. That went through my brain for a split second and then I kind of woke from the daydream, got on the plane and left. When I landed in San Francisco I turned my phone on and then I found out that he passed away. So yeah it was really sad for me. He was always really kind to me, and I think that’s a big feat knowing that he’s gone through so many members and all that, so to know he actually liked me was very comforting.

H: That is quite an achievement, because I’ve heard so many bad stories – as well as good – but I like to cling on to the nicer anecdotes.

C: He was always very kind to me, too. When he used to come and see DRINKS he’d call us Snacks. It’s a terrible joke but the way he clung on to it was so funny: “yeah yeah I’m just here to see SNACKS, you know that band SNACKS” and so on…

T: He did it in that way where it was like I don’t give a fuck about your music but I just want to see you.

C: We were playing in the Soup Kitchen one night and this really excited kid came down to tell us that Mark E. Smith was looking for us. I’d met him before and he’d been a bit abrasive and a bit swaggering but this time he was so gentle and we embraced him and he embraced me and gave us both a kiss and it was just lovely. He was like a really sweet, bad uncle for about an hour and then he stole Tim and gave him some wise words about the Welsh. He said Welsh women are demons and never go to Wales because they’ll eat you there. 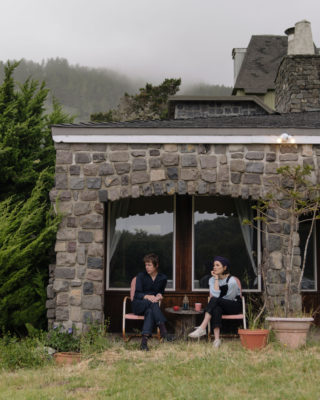 H: Was he a fan of your work then or was he just there to say hi?

T: I know that he liked White Fence. So much so that one night when he left the stage he said go up and play this White Fence song, ‘The Love Between’ – so we had to play that, to fill up three minutes while he left the stage to go do god knows what. So I know that, which is really cool. DRINKS, I’m not so sure, but he came to our shows, which was nice.

H: Cate – we spoke briefly before about the way in which journalists write about you and the general attitude towards women musicians. For example, you’re a really talented guitarist but are always referred to as simply a songwriter. Is it still a big issue for you or do you think attitudes have changed?

C: I think people are just lazy and there’s such a short attention span these days. People will write something without thinking, not realising that when you put something on the Internet you’re actually publishing it. Often I don’t think people are doing it deliberately, but when you are in a position where you’re writing anything that’s going on the Internet then you have a responsibility and people should just take more care with the kind of words they use because sometimes it perpetuates this inequality. I especially notice it with DRINKS because there are two people who are doing the exact same thing yet one is elevated to being a musician and the other one is simply a songwriter, which is such a flimsy word.

I think I’d been on a really long flight once and I was a bit angry and tired and I saw a post saying DRINKS are coming to Portland, and they called me a songstress and they called Tim a musician and it was the first time I’d actually been like, THIS HAS MADE ME SO MAD! It was on an Instagram post so I commented saying “so is Tim not a songwriter or does his penis exempt him?” It’s the first time that I ever reacted to it because it was the last straw; it just really fucking annoyed me. They apologised and said, “you know what, we didn’t think and were just trying to use different words for you both.” But they’d have never done it the other way round – they’d never have said songwriter Tim and musician Cate. There’s just this kind of inbuilt sexism.

Then Tim took a screenshot of the interaction and was like “yeah, go on Cate! We should use the same words to describe men and women because we both do the same thing!” and it was kind of funny because then everyone was like “yeah Tim you’re right! Go on Tim!”. [Laughs]

T: Honestly, I just think it is lazy music journalism. A songwriter is not a terrible thing to be – it’s not that – we’re both songwriters and that’s fine. It’s just that I want to know more about who we’re talking about. Is she just a songwriter or does she play guitar or does she produce?

C: It annoys me when people call me a songwriter, but that’s just an annoyance of mine. When it’s in comparison to Tim that’s when I get a bit mad. We’re so progressive in so many ways in society and there’re these moments when you realise how regressive some aspects are and it’s kind of really sad. It just seems that we are getting caught in a loop that stops us from progressing. It’s really simple: everyone just needs to be really vigilant about the language they use.

H: What’s coming up next for DRINKS?

C: We’re hoping to do some UK shows. There’s no point in a band like DRINKS doing a lengthy tour because there aren’t many people who want to see us [laughs]. Maybe London, Manchester and somewhere up North. We’ll see – I’ve grown an aversion to touring since I’ve been a furniture maker. Then Tim’s just finishing a new White Fence album so I suppose I’ll be living in that world for a bit. We’re going to make sure the few shows we do are very good! 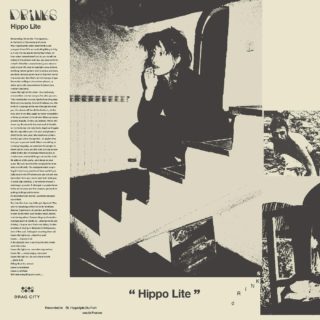