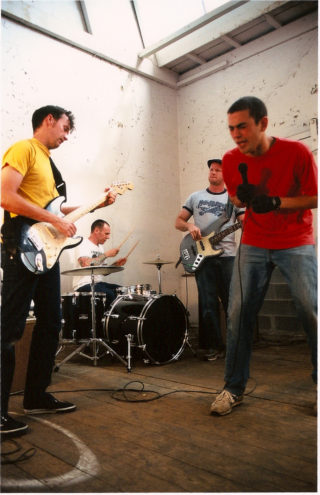 “We played this mini-festival in an alleyway a couple of years ago,” begins Eddy Current Suppression Ring’s guitarist Mikey Young. “There’s usually one song where Brendan (Huntley, lead singer) goes for a walk in the crowd anyway but then everyone put their hands up and he just started walking along everyone…”

Now we’re not (intentionally) comparing Eddy Current… to Jesus but right now their underground worship back home is pretty pious. You might have been hearing about snoozy bronzed-hopes The Temper Trap and Tame Impala but Melbourne’s backroom lo-fi fuzz-rockers are far more interesting.

“It all started accidentally and we didn’t have any ambitions,” says Mickey, sat up in bed as we wake him with a breakfast call from L&Q HQ. “It has always kept that low-pressure vibe about it. There’s never been any expectations for us to do anything – it’s just a hobby that got a bit out of control.”

Indeed, at four years of age the band has already gone far beyond what any member imaged when they met at Australia’s only vinyl pressing plant in their hometown (“if you’re into music at all the rest of Australia sucks compared to Melbourne”). It was there Mikey worked with Brendan and Brad Barry (bass). Mikey’s brother Danny (drums) also clocked-in there.

“One year we had a garage sale Christmas party – just to get rid of some records and have a drink,” he recalls. “We were the last to leave. Once everyone left we just started jumping on the drums and guitars. Brendan was there and we asked him to sing. There was no mic so we got him to yell into a tape recorder. He was drunk and I think he was having some girl troubles at the time or he was messed up. He’d never been in a band before, he’d never even thought of singing.”

The following day, shaking off hangovers they decided to listen back to the demos in the warm light of day. They were, much to their collective surprise, actually “really good.”

“From there we decided to put out a 7 inch and play one show and that would be it – we’d quit.” Fortunately the record flew and the gig wailed. “So, we decided to do a second gig and four years later we’re still kicking around.” 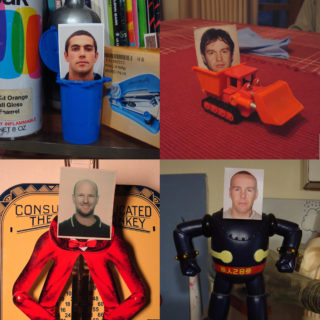 Named after one of the factory’s electrical components, they decided from the outset they’d go it alone – like their heroes The Feelies, The Troggs and The Zombies – without much help. “We’re pretty proud of how far we’ve got without involving many other people,” croaks Mikey. “We don’t have any managers or bookers, it’s all done by us. For the moment, before it becomes a real stress, I’d rather just do it myself.”

True to their word they’ve released both their records so far – 2006’s eponymous debut and 2008’s ‘Primary Colours’ – on their own label Aarght!. Both albums will be packaged together and released on Melodic records (Minotaur Shock, The Longcut) in the UK this summer.

And it’s that LP, ‘Primary Colours’, which incredibly got nominated for an ARIA – Australia’s version of the Brits – last year. Perspective? That’s like The Shitty Limits getting a nod for Best International Band alongside The Script.

“We don’t really belong in that sort of category with real bands,” laughs Mikey. “It was just a strange thing. You get a limo to the red carpet and you’re walking past Pink… it was bizarre. We didn’t win.”

Amongst Australia’s vapid music-arti isn’t the only time they’ve felt out of place either. The band refuse to do photo shoots after giving in to doing one for America’s Spin magazine last year. “We did this one photo shoot – I know the girl who did it, she was lovely – but for us it was excruciating – we couldn’t handle it,” he says. “Then the magazine came out and we all hated the photo. It was a total waste of time – we said we’re never going to do it again. 99% of bands press shots you see are horrible – the band look like idiots.”

Where they do feel at home though is on stage. Well sort of. “Two weeks ago we played at the Melbourne Zoo just out in the grass amongst the animals,” laughs Mikey. “It turned into one of our most amazing gigs ever.” Amazing is the right word, three thousand people weren’t just there for the cookaborough feeding time. “We got to see some elephants – I hadn’t been to the zoo for about twenty years – maybe we can make an animal themed album.”

When they’re not playing punk warehouse shows, or being invited onto the South Hemisphere’s largest touring festival, Big Day Out, they’re playing in mates’ beach shacks. If you don’t believe us, see the stunning video – more of a home movie really – for single ‘Which Way To Go’. “We actually played a show at, like, midday on the beach and only told twenty of our friends. We wanted to capture more the looks of passers by – old men walking their dogs.”

While Mikey is clearly the highly-motivated engine behind the band’s rise it’s painfully shy, glove-wearing lead singer Brendan who proves the most curious element. “At the start, his sense of timing was really weird,” remembers Mikey. “He doesn’t have an understanding that there’s four beats to bar and things like that because he’s never been in a band or known much about music. There are still songs to this day that I have to nod at him to start singing each line.”

And his now trademark handwear? “He was just nervous and he just wanted to take something on stage. He kept looking around and put the gloves on. It was the idea of the security blanket – the thing that turns you from every day Brendan into Brendan Suppression. Now it’s just a habit, a good luck charm.”

Not that the rest of the gang are particularly well versed in this band-lark either. Their ramshackle sound is deliberate. “We just don’t want to learn the songs too well,” he reasons. “Just to not work it and work it and play it ten times and lose an edge to it. The same goes for the band’s recorded output. Album one was recorded in one day, the second in two. Urgency, isn’t just key, it’s a foundation. “If we can’t play a song that we normally play live in three goes then we probably shouldn’t be recording it anyway. It just works better if we keep it really skeletal. I think people respond well to simple, repetitive music as well.”

Now, with album three on the way and plans to come to the UK next year, their frenetic pace doesn’t look like slowing. “We’ve started writing songs which doesn’t take us long – we write really quickly.”

When, or if, they do arrive it’ll inevitably be a commotion. And, like the kids in the alleyway, we’re ready for Eddy Current Suppression Ring to walk all over us.