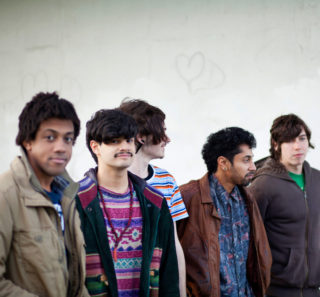 From Bahrain to south London, Stuart Stubbs meets a band pushing themselves to sound 'a lot weirder'

In the Brixton home of Kamal Rasool the other members of Flamingods file into a room festooned with fantastic hats and headdresses, patterned fabrics, an embroidered portrait of Tutankhamun and other fascinating objets d’art from around the globe. Records are everywhere too, but everything is outnumbered by musical instruments, particularly of the percussive kind. Flamingods like hitting things, and thanks to Kamal’s excessive travels with his family they carry with them an impressive collection of drums from Tanzania, the Middle East and the Amazon Basin. Today is Kamal’s 21st birthday; his favourite present is a pair of miniature cymbals on a string that he proudly drapes on his shoulders having shown them to the band.

Karthik is a friend from London, but Kamal, Sam, Craig and Charles grew up together in Bahrain, a small island in the Persian Gulf apparently best described as “hot, cheap and lazy”; a place where “everyone just listens to Akon on repeat”. There, the four friends formed what they call “a standard indie band”, largely due to being exposed to little else.

“I tried to push you guys, for a long time, to make the band a lot weirder,” insists Kamal. “No one really got it at the time,” he laughs. Sam admits that other than Kamal no one else on the entire island was listening to the likes of Animal Collective and Deerhunter, just rap and metal.

Flamingods began as Kamal’s project when he and his friends moved to England to start University two years ago. It couldn’t be further from ‘standard indie band’ territory, adamantly discarding the verse-chorus-verse norm, entrenched in cyclical rhythms and fascinated with the idea of vocals-as-another-instrument, rather than a focal point, inspired by Animal Collective’s 2004 album ‘Sung Tongs’.

“The whole idea of it, in the beginning, was that I was trying to transcend my cultural experiences into music,” explains Kamal, “obviously taking influences from other bands that I’m into as well, and African music, and music from all around the world. The instruments [acoustic and traditional] play a big part as well, but, yeah, just taking all the places I’ve been to around the world and trying to put those ideas into songs. I’m not sure if that works completely, or if people can tell that that’s what we’re trying to do, but that is the main focal point of it. Obviously, we do have psychedelic influences as well.”

“Also, we don’t uniform songs,” notes Sam. “We like the idea of repetitive, ongoing music, for ages, without any verse, lyrics or chorus – it can just be music forever. Like, I’m studying a popular music course believe it or not, and it’s fun, but it’s also terrible, because I’ll say, ‘Hey, come on, uni band, let’s play for a minute without any vocals,’ and they’ll frown on that and say it’s boring. And I’m like, ‘no it’s not, we’ve got some awesome music going on here!’. We like the randomness of it.”

“I think the point in my life when I got into that stuff was when I was in the Amazon and we met a tribe there who were playing music,” says Kamal, “but I realised they weren’t looking at notes or reading any music, they were just going with it, making music, making stuff up and getting into a euphoric state. They didn’t have any experience, musically, and neither do I. I just play what I play and hope it sounds good, but I’m lucky to have these guys, because I’ll just come up with the ideas of the songs and can take it to these guys who can put it into a structure and make sense of it.”

Kamal recruited his old friends when his home-recorded tracks began getting him gig offers. The group had dispersed around the country, with Sam and Craig studying in Southampton and Brighton, but they were happy to help.

“I’m basically like their Mum, calling them up all the time,” laughs Kamal. “They call me Queen Latifah…”

“Cos he’s quite a diva,” say the whole band as one.

“Yes you are,” says Sam. “But no, it’s pretty tricky, because we’ve got different things going on and it’s quite pricey travelling back and forth.”

“We used to meet up a week before a gig to practice,” says Craig, “then we’d meet up an hour before. Now we don’t practice at all.”

“We do want to practice,” insists Sam.

Kamal: “But while we keep saying we’re going to take a break to work on new things we keep getting offered really great gigs.” 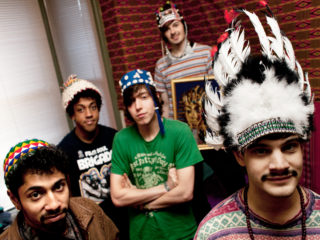 It’s live where Flamingods are truly realised – “a happy, dancey band,” as Sam puts it. Together with Charles, Kamal has recorded two albums and one EP so far, and while new cassette release ‘Away’ is especially a worthy introduction to the band’s ritualistic world music, he understands that people are more easily connected to Flamingods when stood in front of them. It’s partly down to the lo-fi nature of the hissing tapes, “and people just get it more when they see all the instruments”. But, ultimately, it’s the band’s own enthusiasm that’s so catching.

The five of them play sat on the floor, passing drums left and right and welcoming anyone to enjoy it as much as they clearly are. It’s an all-inclusive party where the band are having a better time than anyone else, and it takes just one audience member to set the others off dancing. Kamal puts the communal feel down to the fact that, “we are all best friends anyway – we’d be hanging out whether we were in a band or not,” while Sam admits, “there are a couple of songs where I’d really like to be in the audience”.

“We have a system and certain faces we’ll pull at each other,” says Kamal when asked how, without standard verse, chorus and vocal passages, they remember their songs live; when to drum and when to feed another yelp through a delay peddle. “But playing it the same every time is not the point,” he says. “We want it to sound spontaneous. Ritual music is probably my biggest influence, and I’m just trying to put that into songs so we can put our own spin on it.”

“There are occasions where I wouldn’t have been able to make it to practice, so we’ll just start a song on stage and hope it goes well,” says Craig. “There’s always an element of risk.”

“The thing is, we do just do it for the music,” reasons Sam. “We’re not doing it for any other reason, because at the moment we’re not making money – we’re progressively getting poorer. We just love it.”

Although more and more fleetingly as studies and train fares get in the way, whenever the band do practice together they record the session. They’ve got a video of what could be considered their first rehearsal too, which neatly captures the band’s communal spirit. It was shot at ATP festival, where Flamingods went from being Kamal’s solo project to a group concern.

“I don’t know if you remember this, but the first time we began playing together as a band was at ATP festival,” says Kamal to the others. “It was the first ATP we all went to, and the first festival Charles ever went to,” he continues, “and we just saw all of these amazing bands, and it was when we saw [experimental Japanese band] Boredoms, who had, like, 11 drummers, that must have been the moment we decided to do something.”

“I almost cried when I saw them,” remembers Sam. “Like, I’m a drummer, and there were 11 of the greatest drummers ever beasting it in front of my face. I just couldn’t handle it, and yeah, that’s where I started to love the idea of drums coming together.”

“We did actually start the band at ATP in 2010,” Kamal reiterates. “We brought some instruments down to just jam with in our room, and then people walking past would be like, ‘oh, we want to play too,’ and it was just incredible because people were climbing in through our window, and I gave them pots and pans to play.

“We went to the following Animal Collective ATP and we brought down even more instruments and it was just insane. We had 60 people crammed into our chalet and people dancing outside.”

“It was like a constantly changing band,” says Sam. “People would leave but others would then come in.”

Kamal: “It got a bit out of control and turned a bit dark. All the lights went off.”

Sam: “We couldn’t stop it and it turned into a monster of its own. Like, Kamal left, and then I left, and then all of us were hiding in the other room. It went on for eight hours.”

Having taken the band’s theory of “ongoing music forever” to its disruptive extreme, Flamingods were wrapped on the knuckles by festival security and daren’t take their instruments to ATP again. It’s their ultimate goal to play the event officially though, and to continue to share their tribal jams with as many willing ears as possible.

“We take our music seriously, but we don’t take ourselves seriously at all,” laughs Kamal. “If someone emails asking for some songs we’ll try to share as much as we can and send them a load of B-sides or something. We could be a dark, tribal band, but what’s the point in that?

“I think the next stage for us is going into the studio to see what we can do there,” he continues, “because I think a lot of people really like our live stuff but they don’t get our recorded stuff as much. We understand though. We don’t get offended if people say they’re not into our music. I mean, everyone’s into their own tastes. But we basically need one person to start dancing and then the whole room will. That’s our aim, to get one person dancing.”